The Uyuni - Salta stage was split into two parts, with the cars crossing the border from Bolivia to Argentina through a neutral section in the middle. 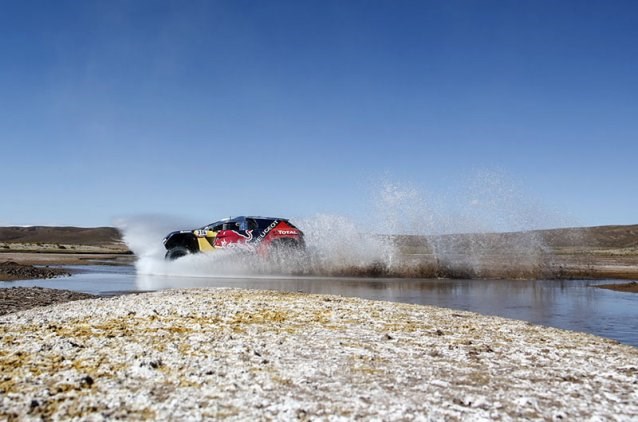 Sebastien Loeb retook the lead of the Dakar Rally on Saturday, while his Peugeot team-mate Carlos Sainz claimed stage honours.

The Uyuni - Salta stage was split into two parts, with the cars crossing the border from Bolivia to Argentina through a neutral section in the middle.

At the start of the neutral section Loeb enjoyed a lead of more than two minutes over Sainz, with overnight rally leader Stephane Peterhansel 3m27s back in the third Peugeot.

But engine problems for Loeb meant Sainz assumed control when the stage resumed in Argentina, building a lead of 56s over his fellow World Rally champion before reaching the finish line 38s faster than the Frenchman.

With Peterhansel 3m27s adrift of Sainz at the finish, Loeb retook the overall lead of the standings by 2m22s heading into the rest day.

"The first [section] was awesome, we went at full tilt and opened up a big gap," said Loeb.

"We then had trouble before the start of the second sector.

"The car worked more or less, it was a turbo management problem, but we lost our focus and bit and made a navigational mistake.

"Halfway through it started working properly again, and we put on the afterburners for the rest of the stage.

"I was super motivated this morning to take the lead back.

"We didn't manage to do everything we wanted, but we're in the lead and that's what counts.

"The next three stages after the rest day are packed with pitfalls, but our only strategy is to attack a lot."

It marked a turnaround in fortunes for Loeb, who lost more than eight minutes on Friday when he suffered two punctures and a sticking throttle, costing him the lead to Peterhansel for a day.

Sainz's recovery continues from the engine drama that cost him more than 10 minutes on the first proper stage of the rally on Monday, and he is now within five minutes of the lead following his stage victory.

Peugeot was denied a lockout of the top three places on the stage by the Mini of Nasser Al-Attiyah, who completed the stage just five seconds quicker than Peterhansel.

Hirvonen overturned a deficit of 30 seconds to the Toyota of Giniel de Villiers to get into the top five, now 48 seconds ahead of the South African.

The fourth Peugeot of Cyril Despres, which is 1h45m off the lead after a difficult first week, returned to form, setting the sixth-fastest time on the stage.

In the motorcycle category, Portuguese rider Paulo Gonvcalves continues to lead with Australian Toby Price working his way back up to second place.

Sherco-TVS now has two riders up in the top 10 - which Alain Duclos in ninth and Pedrero Garvia in 10th place.