Rosberg sets the pace at Barcelona 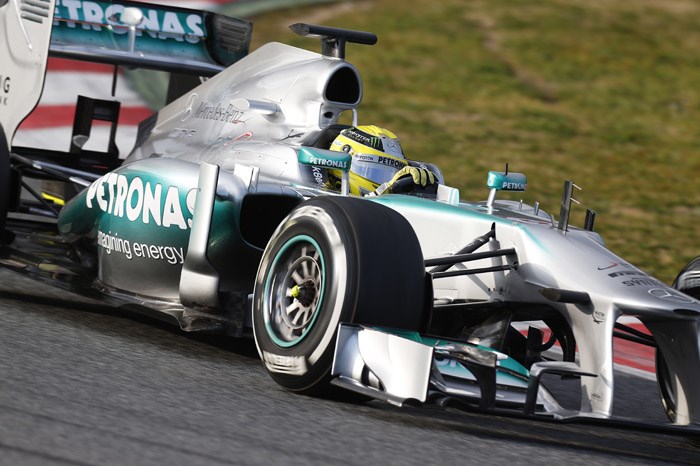 Nico Rosberg narrowly edged out Kimi Raikkonen to put Mercedes on top on the first day of Formula 1 pre-season testing at Barcelona.

Both men found improvements after bolting on Pirelli's medium-compound rubber in the final 20 minutes of the day.

Rosberg, whose morning had been disrupted by lengthy gearbox checks, was the first to make his move. New overall bests in the final two sectors produced a lap of 1m22.616s and vaulted him to the top of the timesheets.

Minutes later Raikkonen staged his own late rally, but despite bettering Rosberg's sector two time he fell seven thousandths of a second short of putting Lotus on top.

Fernando Alonso, again on mediums, was another late improver.

On his first day in the Ferrari F138 last year's championship runner-up worked his way down to a 1m22.952s to end the day in third.

The German had gradually improved his lunchtime best and was the first man to dip into the 1m22s bracket, only to be bumped down the order in theclosing stages.

Having launched its FW35 in the morning, Williams ended the day in fifth position courtesy of Pastor Maldonado, a racewinner at Barcelona last year.

The Venezuelan spent time at the top of the timesheets in the morning and racked up 85 laps in total, behind only Alonso in 110.

Daniel Ricciardo in the Toro Rosso STR8 shaded McLaren's Sergio Perez in the fight for sixth, while Paul di Resta - the day's third busiest man - was just two hundredths of a second down the road for Force India.

After bringing about the day's first red flag with an early out-of-fuel run, Esteban Gutierrez was ninth fastest and just over 2.5s off the overall pace for Sauber.

Charles Pic was the only other man to cause a stoppage, pulling to the inside of Renault due to a mechanical issue with his Caterham.

He dropped to 11th in the afternoon as Marussia's Max Chilton found improvements with the soft tyre.