MotoGP: Morbidelli takes his second win of the season at Teruel GP

Alex Rins and Joan Mir make it a superb round for Suzuki, finishing 2nd and 3rd, respectively. 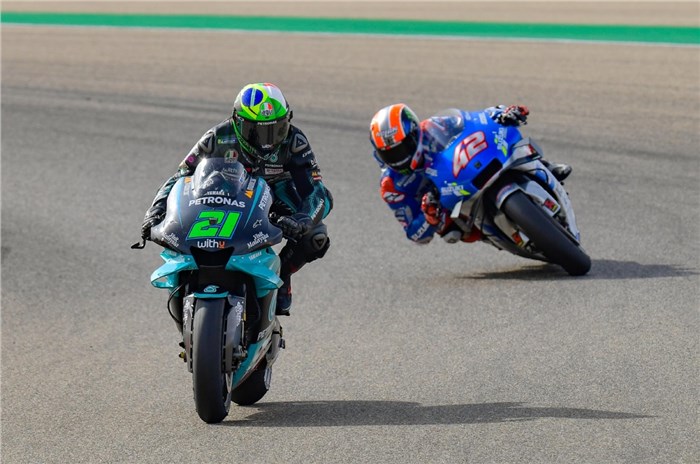 This past weekend, the MotoGP paddock returned to MotorLand Aragon for the inaugural Teruel Grand Prix. A faultless performance from Franco Morbidelli saw him become only the second double winner of the 2020 MotoGP season.

Morbidelli atop his Petronas Yamaha SRT was, by far, the best rider on track this Sunday. He crossed the finish line over 2 secs ahead of Suzuki’s Alex Rins and Joan Mir, but the latter’s 3rd place performance was enough to extend his lead at the top of the rider’s championship

Morbidelli, on the other hand, became only the second rider (after his teammate Fabio Quartaro) to pick up a second win this season

The drama began right from lap 1. After a very impressive qualifying performance, Takaaki Nakagami started on pole position and also got an ideal start to the race, leading the pack into the first corner. At Turn 2, KTM factory rider Brad Binder and Pramac Ducati’s Jack Miller made contact and tumbled out of the race. Moments later at Turn 5, Nakagami, who had otherwise been flawless this season, lost the front and went down, ending his dreams of a first MotoGP victory or podium.

This left Morbidelli leading, closely followed by Aragon GP winner, Rins. Mir made a glorious start from P12 and was up in P5 on the opening lap, ahead of Fabio Quartararo. Johann Zarco was up to P3 and fending off advances from Maverick Viñales and Mir. As the race progressed, Quartarao was slipping back with Cal Crutchlow and Alex Marquez moving past him.

Alex Marquez was showing impressive pace as well. On lap 4, he set the fastest lap of the race and was hot on the tail of Joan Mir, hoping to make it three back-to-back podiums. Up front, Morbidelli set a 1 mins 48.089 secs laptime to take the race lap record at MotorLand. Along with Rins, he was now a second up the road from third place Zarco, on lap 6. Rins and Marquez eventually made their way past Vinales and Zarco, up to P3 and P4, respectively.

By lap 7, Quartararo was struggling to hang onto 7th place and Pol Espargaro, Crutchlow, Miguel Oliveira, Aleix Espargaro and Andrea Dovizioso were all in hot pursuit. Meanwhile. the front four were slowly pulling away from the rest of the pack.

Unfortunately, with 11 laps to go, Alex Marquez lost his front end and all hopes of a third straight podium.

No mistakes by Morbidelli

At the front, Morbidelli was slowly extending his lead over Rins, who in turn, was pulling away from his teammate. With six laps to go, Morbidelli was the only man still in the 1:48s, a couple of tenths faster than Rins as the gap rose to 0.8 secs. A flawless performance meant that despite Rins’ clean ride, he was making no headway in catching up with Morbidelli.

With three laps left, Morbidelli’s lead rose to 1.2 seconds. Mir was 2.6 seconds back and there was little he could do to catch up with the Yamaha in front of him. Meanwhile, the battle for 4th was raging between Pol Espargaro, Zarco and Oliveira.

Unsurprisingly, Morbidelli made no mistakes and the win was his to take.

Rins took 45 points from 50 in Aragon and brought himself into strong contention for the title race. Mir’s charge from P12 on the grid to P3 was good enough for him to extend his lead in the World Championship. Pol Espargaro picked up P4 after starting from ninth on the grid with Zarco and Oliveira finishing behind him. Viñales and Qaurataro followed after having a rather disappointing race. Iker Lecuona secured his third top 10 of the year in P9 and Danilo Petrucci rounded out the top 10.

Dovizioso finished in P13, making his chances of a MotoGP title in what could be his last year in the premiere class even slimmer.

With just 3 races to go, Mir leads the standings by just 14 points, while the MotoGP paddock heads to Valencia for the Grand Prix of Europe, two weeks from now.