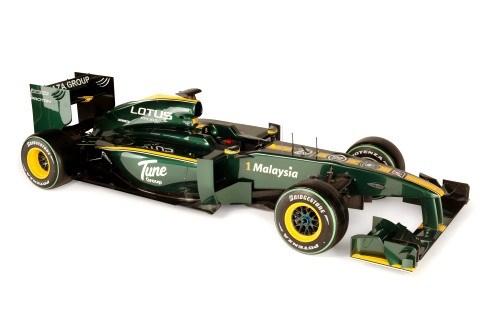 Lotus Racing has launched its new Formula One car. The car will be raced this season by F1 race winners Jarno Trulli and Heikki Kovalainen.

The car was unveiled at the Royal Horticultural Hall in front of 400 guests, including all staff of the newly formed team. The car will carry the historic yellow and green colours of the Lotus F1 team.

"It is only five months since we were given an F1 entry - nobody gave us a hope of making the grid, so this is a fairy story for us," said Tony Fernandes, Lotus team principal. "I signed as a sponsor for Williams four years ago through Air Asia, and they gave me the bug and inspiration to be here today. I just had to do more."

Technical director Mike Gascoyne added: "This is a special car because it brings Lotus back. I went to school down the road from where the team is based, so this is a very special moment on a personal level too.

"I remember when we got the go ahead to race this year. We started with four people five months ago, and we sat and looked at each other and thought 'What the hell do we do now?'".

Kovalainen said: "It's been a huge effort for the team just to be here. I doubted Lotus at the startm but this is for real. We've come a long way, and I can't wait to drive it."

Trulli added: "It may be a very different Lotus, but it's great to have the name back. I'm really fired up. It's a huge challenge, but I'm up for it."

Fernandes also stressed the teams historic roots, saying: "[Lotus founder]Colin Chapman's family have given us their blessing, and they have been involved with the creation of this team all the way."