Mercedes' Lewis Hamilton bounced back from an engine problem that sidelined him for the morning session to top the times in second practice. 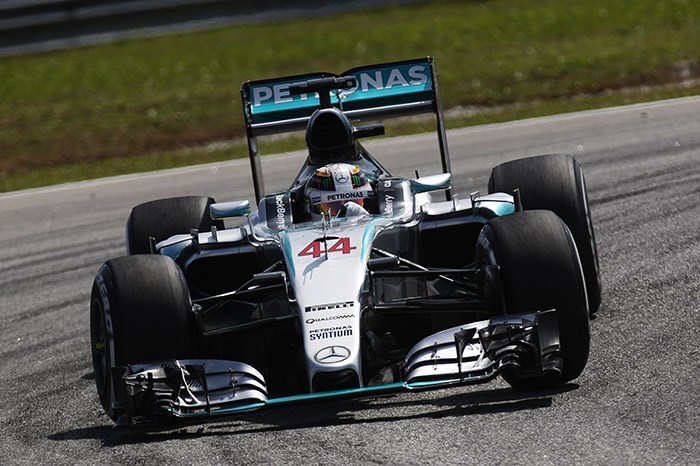 Mercedes' Lewis Hamilton bounced back from an engine problem that sidelined him for the morning session to top the times in second practice for Formula 1's Malaysian Grand Prix.

The reigning world champion stopped on track on only his fifth lap in first practice following a failure on the power unit inlet system and missed the rest of the session.

But Mercedes fixed the problem and got Hamilton out 40 minutes into second practice at a scorching hot Sepang International Circuit.

The Briton's initial flying lap on the hard-compound Pirelli tyres was good enough for sixth but his run was disrupted by telemetry problems.

He rejoined the fray with just over 20 minutes remaining and clocked the fastest lap of the day - a 1m39.790s on the mediums to finish 0.373 seconds clear of Ferrari's Kimi Raikkonen.

Nico Rosberg led the way after the initial runs on the hards, but lost time in sectors two and three on his qualifying simulation and ended up third quickest, 0.428s adrift of team-mate Hamilton.

Drivers struggled for grip as track temperatures hovered around 60C, hotter than anything the teams encountered in the entire 2014 season.

Sebastian Vettel was caught out on his qualifying simulation, losing the rear end of the Ferrari on the approach to Turn 11.

The German kept the car out of the gravel but did not do another quick lap on the options, instead choosing to switch his attention to longer runs. He ended up seventh.

After spending the first half of the session in the garage, Daniil Kvyat eventually headed out on track and pumped in the fourth fastest time in the Red Bull, 0.556s off the pace.

However, there were frowns on the Red Bull pitwall with a few minutes remaining when the Russian reported an engine problem on team radio.

Valtteri Bottas was fifth quickest ahead of Williams team-mate Felipe Massa, whose team was given a suspended fine after the Brazilian ran a set of tyres outside the permitted window in practice one.

Carlos Sainz Jr could not repeat his good form for Toro Rosso from first practice, where he finished fifth quickest, as he ended up 14th, 1.1s slower than team-mate Verstappen while Force India's Nico Hulkenberg was 15th.

McLaren was able to get some good mileage, but Fernando Alonso and Jenson Button finished down in 16th and 17th respectively, 2.7s off the pace.

Alonso's long-run was disrupted when he locked-up at the Turn 15 hairpin and skated off into the gravel before recovering to the pits with a flat-spot.

Romain Grosjean reported a loss of power and retreated to the pits, with Lotus ending the Frenchman's session 30 minutes early to investigate the problem.

Grosjean was 18th quickest, after completing just seven laps, one place ahead of Manor's Will Stevens.

The other Manor of Roberto Merhi finished last, having brought out the red flag with a little over 30 minutes of the session gone.

The Spaniard, who ended up 20th and last, looked like he was struggling for rear grip and spun at Turn 11, beaching the Manor in the gravel.