Jenson Button secures his first pole position for McLaren with a stunning performance in the Belgian Grand Prix qualifying. 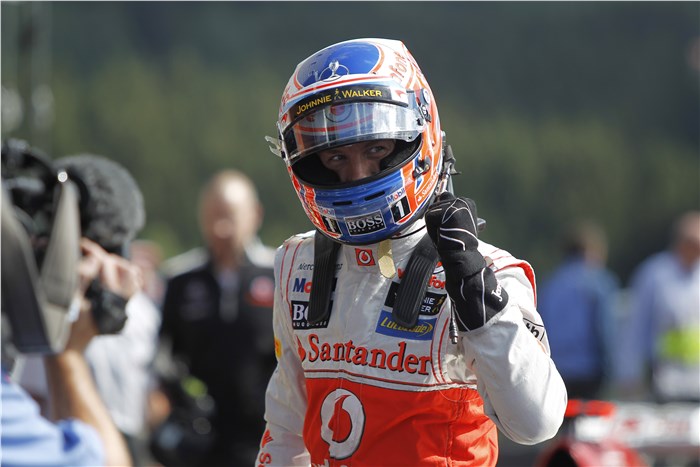 Kamui Kobayashi claimed his maiden front-row start as he underlined Sauber's speed with a shock second place, while world champion Sebastian Vettel failed to make it out of Q2.

Button put himself eight tenths clear of the field for much of Q2, then repeated that speed to deliver a 1m47.686s early in Q3.

One of the few drivers to do two Q3 runs, he found even more time at the second attempt and delivered a 1m47.573s.

Q1 pacesetter Pastor Maldonado was another star underdog as he took third for Williams, although an impeding incident involving the Venezuelan and 12th-place qualifier Nico Hulkenberg is under investigation.

Pre-race favourite Lotus only managed fourth with Kimi Raikkonen and ninth with Romain Grosjean. The latter had a few scares just getting out of Q1 following a mistake and traffic issues with an HRT.

As one McLaren took pole, the other was only eighth quickest, although Lewis Hamilton will gain a place when Mark Webber's Red Bull is demoted five places from seventh due to a gearbox change penalty.

Vettel was the most significant casualty of a close Q2. Just two tenths separated him from Red Bull team-mate Webber, but that translated to seven positions, as last year's Spa poleman and race winner ended up only 11th, 0.012s off a Q3 spot.

He was not the only big name to miss out. Felipe Massa trailed the sister Ferrari of Alonso by seven tenths as he struggled to 14th, behind Michael Schumacher, whose 13th place was the best Mercedes could manage on a tough afternoon.

Already carrying a five-place grid penalty for a gearbox change following his morning failure, Nico Rosberg was only 18th in qualifying after crossing the line moments too late for a final Q1 run.

Rosberg's disappointment meant both Toro Rossos reached Q2, where they beat the Williams of Bruno Senna. The Brazilian pulled off an incredible save after sliding broadside across the kerbs through most of Pouhon, then had to pit for repairs and could not get above 17th when he rejoined.

At the back, Timo Glock used Marussia's upgrades to get a little closer to the Caterhams, but his team-mate Charles Pic was beaten to 22nd by Pedro de la Rosa's HRT.