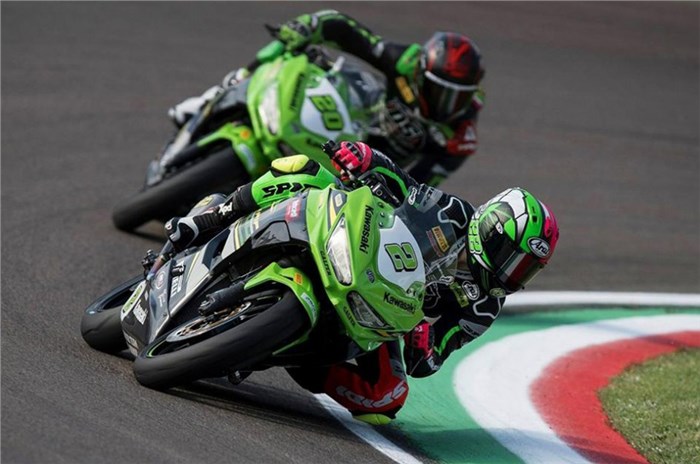 Carrasco took a commanding pole on Saturday (another first for a female), gapping the field by nearly 1sec. She then backed this up with a lights-to-flag win on Sunday, taking the chequered flag 14sec ahead of her nearest competitor. Her biggest championship challenger, Luca Grenwald, finished the race in 4th, handing Ana the Championship lead. Previous championship leader Scott Deroue arrived at Imola with an eight-point lead, but suffered a crash in the closing stages of the race.

“It's the first time I've been one rider going alone and I want to say thanks to all my team because my bike was perfect and everything was really good – and this is thanks to them,” said Ana Carrasco, after her win. “It feels incredible to lead the standings. This is what I want to show. I think from Aragon we were strong, but in the races we didn't have good luck.”

Hailing from Murcia in Spain, the 21-year-old Spaniard has previously participated in the Moto3 World Championship from 2013-2015, scoring her best finish of 8th on a KTM. With only two point-scoring finishes in three seasons, Carrasco then switched to the World SSP 300 class for 2017, riding for Kawasaki. She seems to have adapted to this format much better, winning a race in her debut season, and looking like a genuine championship contender.

She will be hoping to maintain her lead at the next round at Donington Park, England, in two weeks’ time.