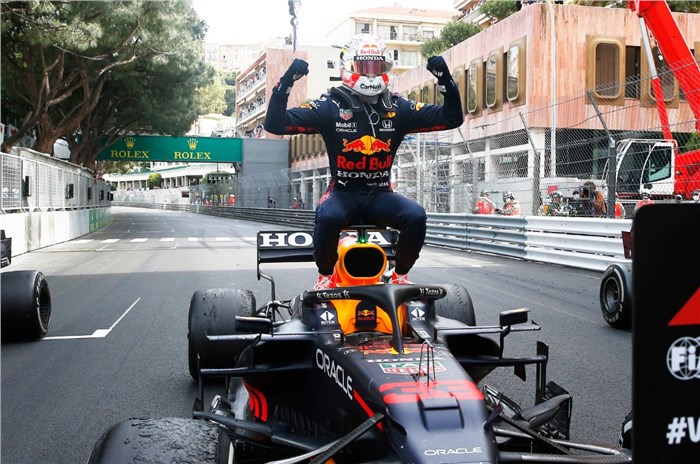 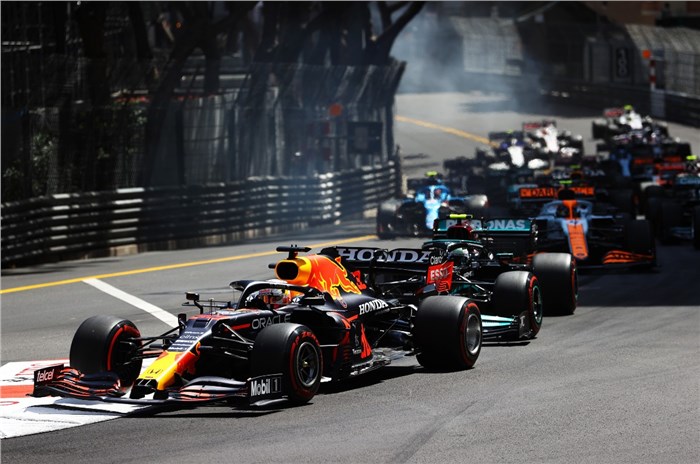 Verstappen snatches the 2021 F1 championship lead from Hamilton; Sainz and Norris on the podium.

Max Verstappen conquered the tight confines of the Monaco GP track to score his maiden win at the historic venue. With this, he storms to the top of the 2021 F1 championship standings since his main rival Lewis Hamilton was only able to finish 7th.

With polesitter Charles Leclerc unable to start the race, the pole position slot was left empty and Verstappen slotted into 2nd place on the grid with no one ahead of him. He successfully covered Bottas at the start, and it was smooth sailing for the Dutch driver from there on.

“You never know what’s going to happen, but it was all about looking after your tyres and finding a good stop gap. Of course, the others went earlier so that made it a bit easier for me. I was pretty much in control. You always want to win this Grand Prix. I remember when I was very little already watching this Grand Prix. Standing here I’m very proud, but I’m also thinking ahead it’s still a very long season. Of course, it’s a great way to continue.”

Monaco isn’t known for overtaking, so it was the retirements that stole the limelight, rather than the on-track action. Unfortunately for Leclerc, his bleak record of never completing his home race continued this year.

The Ferrari driver secured pole position in dramatic fashion, despite crashing out in the final moments of qualifying. After examining his car, Ferrari opted to not change his gearbox, thereby avoiding a penalty – something that would come back to haunt the team.

Leclerc failed to make it to his starting position, with Ferrari later confirming that he wouldn’t start the race “due to an issue with the left driveshaft which is impossible to fix in time for the start of the race."

Bottas was the only other driver to retire. He remained Verstappen’s only realistic rival in the initial stages of the race, but suffered a disastrous pit stop. For viewers, it became apparent that the right front wheel of his car was refusing to come off, ending Bottas’ race.

Mercedes explained that the wheel nut machined onto the axle, making it impossible to change the wheel.

Bottas’ retirement promoted Sainz to a comfortable 2nd place – the Spanish driver’s first ever podium for Ferrari.  Monaco proved to be a strong venue for a much-stronger Ferrari team and Sainz’ podium gave the Italian squad something to cheer for after Leclerc’s retirement.

He was followed by his former McLaren teammate Lando Norris, who scored his second podium of the year. Sergio Perez finished 4th, with some masterful strategy from Red Bull allowing him to jump from 8th to 4th during the pit stops.

Another driver who made the overcut work was Sebastian Vettel, taking his best finish of the year with a 5th place result. Aston Martin seemed to be on top of strategy in Monaco; Lance Stroll pulled off a 58-lap stint on hard tyres to finish 8th. Together, the pair handed Aston Martin its best result so far this season.

AlphaTauri’s Pierre Gasly was 6th, ahead of Lewis Hamilton. The seven-time world champion faced an uncharacteristically off day, but he did salvage an extra point by setting the fastest lap. Alpine’s Esteban Ocon and Alfa Romeo’s Antonio Giovinazzi finished 9th and 10th, respectively.

It’s been a tight fight between Red Bull and Mercedes this year, and Verstappen’s Monaco GP win may just end up being a pivotal moment. He now snatches the championship lead from Hamilton by four points. This is the first time a Red Bull driver is leading the standings since 2013.

Norris’ podium also sees him move ahead of Bottas to slot into 3rd place in the overall ranking. Next up is the Azerbaijan GP on June 4-6.