Sales analysis 2017-18: the carmakers, cars and SUVs that topped the charts

We look at India's largest automakers and tell you who sold how much in our comprehensive sales analysis. 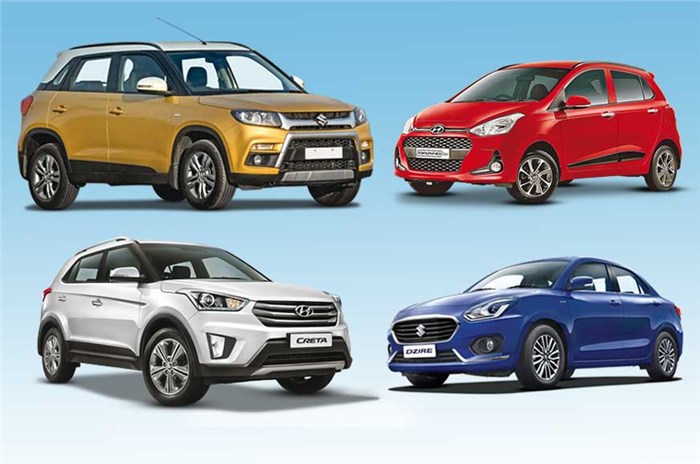 Automakers in India had plenty of reason for cheer in FY2018 as the industry notched 14.22 percent year-on-year growth across vehicle types, selling 2,49,72,788 units, barely 27,212 units shy of the 25-million mark. Passenger vehicles (PVs) — cars, utility vehicles (UVs) and vans — scaled a new high and crossed the three-million-unit mark for the second year running. This growth is due to the continued and surging demand for UVs, a steady flow of new models and refreshes, albeit an unstable policy environment and challenges in the shift to GST, which capped the rise in sales.

The total PV sales of 32,87,965 units was the highest ever in a fiscal year – registering a growth of 7.89 percent in FY2018, according to the Society of Indian Automobile Manufacturers (SIAM). However, the apex industry body had estimated a growth rate of 9-10 percent. “Obviously, the flip-flops in policy making have subdued the growth in sales. But the auto industry has shown resilience by posting a decent 8 percent growth,” Vishnu Mathur, director general, SIAM, told Autocar India.

In line with the global trend, the demand for UVs is outstripping that for cars, and the last fiscal saw 9,21,780 SUVs going home to new buyers in India, up 20.97 percent. Given the accelerating pace of demand, particularly for compact SUVs, volumes are poised to cross the one-million mark in FY2019. In comparison, passenger car sales, grew by just 3.3 percent to 21,73,950 units. The increasing popularity of UVs is further reflected in the fact that in FY2018, they accounted for 28 percent of total PV sales, compared to 25 percent in FY2017.

Despite the government’s push for electric vehicles, motorists in India are yet to warm up to the concept of plugging into e-mobility. In FY2018, barely 777 electric cars were sold, which comprise 0.023 percent of overall PV sales.

Going by the momentum gathered in the first two months of 2018, India is on track to become the world’s third-largest PV market by 2020. With sales of 5,60,806 units in January-February 2018, India has unseated Germany, which sold 5,31,100 units, to become the fourth-largest PV market, according to SIAM data. Notably, India overtook Germany in calendar year 2017 with combined PV and commercial vehicle sales of 4.02 million units with Germany recording 3.81 million units.

India’s largest carmaker further strengthened its stranglehold on the PV market, increasing its share to 50 percent, up nearly three percentage points. Volumes rose 13.84 percent over FY2017 to 16,43,467 units. While the bread-and-butter entry-level duo of the Alto and WagonR accounted for the largest chunk at 4,27,183 units, their combined volumes reflected modest growth of 3.2 percent.

Apart from the Brezza, the S-cross also help pep up UV sales as it notched 44.39 percent growth to 30,923 units. In a bid to make it more appealing, the S-cross received a facelift around October 2017 with cosmetic changes, and, for the first time, a mild-hybrid system to improve fuel efficiency. Led by the Brezza, Maruti dethroned Mahindra as the largest UV maker in FY2018.

On the small car front, Maruti introduced a new- generation model of its popular compact sedan, the Dzire, in May 2017, and the new-gen Swift in February 2018. While the new Swift’s contribution to overall sales will reflect more appropriately in FY2019, the new Dzire added 1,96,990 units to the carmaker’s compact car volume. Going forward, the new Swift – which has received over 1,00,000 bookings thus far – is expected to energise Maruti’s volumes.

Key performers for the Korean carmaker were the Grand i10 (1,51,113 units, up 3.34 percent), i20 (1,36,182 units, up 7.82 percent) and the Creta (1,07,136 units, up 10.56 percent). The i20 lost its title of India’s bestselling premium hatchback to the Baleno, but its consistent appearance among the Top 10 bestsellers indicates it continues to be much sought after. The recently launched facelift, with minor updates, retains the model’s charm and should continue to attract buyers this year.

The Creta, the steadfast No 2 in the Top 5 SUV list, even crossed the cumulative 2,50,000 unit sales milestone in less than three years. Such is the model’s draw that two new entrants in the PV segment — Kia Motors and MG Motor — plan to begin their Indian innings next year with a Creta challenger.

The third-gen Verna has had a bit of a roller-coaster ride (36,082 units) in FY2018. It started off in the fast lane, edging ahead of key rival City in its first month of sales in September before volumes dropped by more than a third in December. However, the introduction of a new 1.4-litre petrol engine option in January 2018 gave volumes a shot in the arm.

Meanwhile, the Xcent facelift (41,339 units) failed to gain traction in the compact sedan segment dominated by the Dzire. The Xcent’s numbers dropped 13.18 percent over the previous year.

The never-say-die Bolero was Mahindra’s bestseller with sales of 85,368 units, up 23.13 percent, helped by the cheaper sub-four-metre version. The automaker said its focus on rural strategy has helped boost demand for models such as the Bolero and Scorpio in rural and semi-urban areas. Notably, the Bolero recently drove past the one-million sales milestone, 18 years after it first went on sale. What’s more, in the Top 5 UVs of FY2018, it rose one rank to No 3 position, below the Creta and Vitara Brezza.

M&M is now gearing up to launch four new models — the U321 MPV, a compact SUV (codename S201), TUV300 Plus, and a new flagship SUV based on the SsangYong Rexton. This new product offensive will significantly boost the company’s chances of clawing back market share it lost to Maruti in UV sales. Mahindra’s UV share dropped to 25.38 percent in FY2018, from 29.20 percent in FY2017 when it was a market leader. Meanwhile, Maruti’s share grew to 27.53 percent from 25.69 percent.

Of the country’s Top 10 carmakers, Tata Motors grew at the fastest pace, mainly due to the robust market response to the Tiago and a good reception for the Tigor, Nexon and Hexa. Total PV sales (cars, UVs and vans) saw an impressive 21.85 percent growth to 2,10,200 units, from 1,72,504 units in FY2017.

The last fiscal was the first full year for the Tigor, which sold 27,885 units averaging monthly sales of over 2,300 units. The Nexon, launched in September 2017, is proving to be a real game-changer as within seven months of its launch, it has sold 27,547 units — at a monthly average of around 4,000 units — accounting for over 53 percent of Tata Motors’ UV sales of 51,891 units. The model also boosted the carmaker’s UV market share to 5.63 percent from 2.45 percent in FY2017. The soon-to-be launched AMT variant of the Nexon (both petrol and diesel) will further expand the SUV’s appeal.

Honda recovered strongly to end FY2018 on an upbeat note — an 8.08 percent rise in PV sales to 1,70,026 units. Volumes had contracted 18 percent in FY2017. Growth returned on the back of the strong performance of the WR-V crossover and steady sales of the City. Launched in March 2017, the WR-V has sold over 50,000 units, the top-spec VX variant accounting for 80 percent of them. However, the City (56,162 units, down 3.14 percent) saw a slight decline in the face of growing increasing competition from models such as the Verna and Ciaz.

Honda sales are set to receive a fillip when the next-gen Amaze is launched this month. The model’s highlight is the unique diesel-CVT combo — a first in the segment — which is expected to attract a lot of buyers. Honda has also lined up the new CR-V for launch next year. It foresees big potential for the SUV, which now gets a diesel engine and seven seats. Also part of the future range is the Civic, which will make a comeback to India this year, in a sleek, sporty facelifted version.

Five carmakers (rank 6-10) out of the Top 10 recorded de-growth in sales. At sixth position, Toyota posted a marginal decline as volumes dropped 1.90 percent to 1,40,645 units. The carmaker’s immensely popular Innova Crysta (74,137 units) formed a bulk of these sales, followed by the Fortuner (24,364 units). However, mass-market cars such as the Etios sedan and Etios Liva hatchback failed to gain momentum.

The Camry Hybrid saw demand weaken drastically after high GST rates were imposed on all hybrids. Average sales fell to around 25 units a month since July (when GST was implemented) from nearly 110 units a month in January-June 2017.

However, the newly launched Toyota Yaris sedan should boost volumes. Squarely targeted at the Honda City, the new midsizer is well equipped on features such as a powered driver’s seat, gesture control and is strong on safety too with all of seven airbags as standard.

The French carmaker saw a significant decline in sales (1,02,222 units, down 24.35 percent), majorly due to weakening demand for its key volume driver – the Kwid (83,089 units, down 24.01 percent). Renault’s small car sold an average of 6,924 units a month in FY2018, down from 9,111 units in FY2017. Despite rolling out two special-edition versions, the Kwid failed to sustain the momentum. Recently, Renault introduced a competitive 4-year/1,00,000km warranty to entice more buyers.

The brand’s once-blockbuster model, Duster, also saw volumes shrink as demand for the SUV tapered off. Renault sold 14,112 Dusters, down 25.52 percent from FY2017. In an effort to arrest flagging sales, the carmaker recently announced a sizable price cut ranging from Rs 30,000-56,000 on the petrol Duster, and Rs 50,000 to Rs 1 lakh on the diesels. Apart from making the model more attractive, the price cut also aims to prevent possible cannibalisation between the Captur and Duster. Launched in November 2017, Renault’s newest SUV, the Captur has failed to take off as per the carmaker’s expectations.

Ford ended FY2018 with sales of 90,061 units, down 1.47 percent. The EcoSport accounts for the bulk of sales; all other models have failed to keep up with the competition.

In a move to shape the brands’ future model line-up, Ford and Mahindra have formalised their strategic alliance, announcing a plan to co-develop SUVs, jointly build EVs and even share engines. The move will help Ford bridge the yawning price gap between the EcoSport (Rs 7.77 lakh) and the Endeavour (Rs 26.06 lakh). 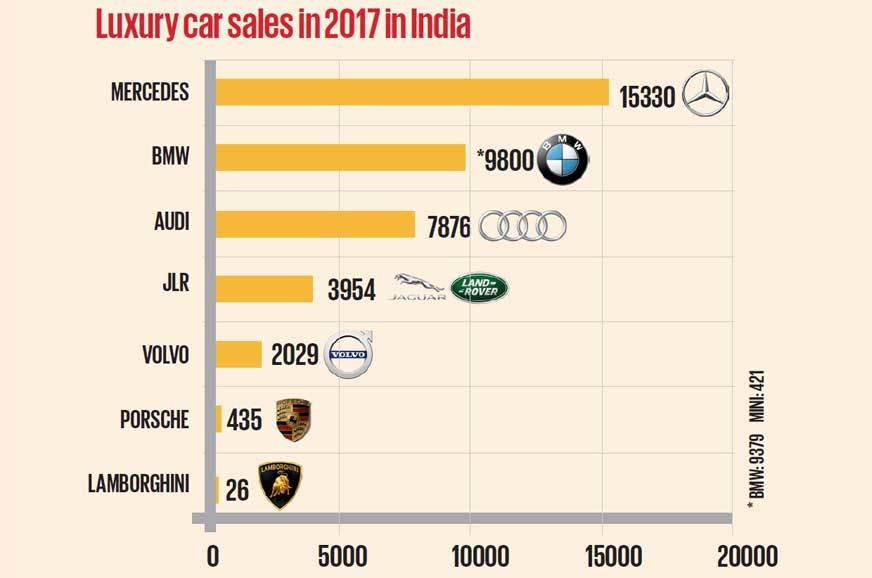 While India Auto Inc exited FY2018 on a high note, the road ahead is unlikely to be smooth. On the one hand, consumers appear to have overcome the GST hurdle and regulatory challenges are assumed to be behind them. However, the pace of growth could see speedbreakers in the form of high fuel prices and a likely increase in vehicle finance rates. Dynamic pricing or daily fuel price revision, which kicked in on June 16, 2017, continues to be a cause for concern for motorists.

Also, India’s top 20 cities, which contribute to over 50 percent of PV sales, have been rather slow in delivering growth over the past three-four years; semi-urban and rural markets are expected to be the key growth drivers in FY2019. UVs, which have set a rapid pace of growth, are expected to significantly overshadow passenger car sales in the new fiscal. A ramp up in demand from rural India which should benefit from a forecasted normal monsoon, and increased public spending in road infrastructure could cushion the factors that impede growth. Thus, SIAM expects growth in high single digits this fiscal.