Calling the AMG A45 S a hot hatch would be wrong. Its 421hp, 2.0 turbo-petrol's performance can embarrass sportscars. Here are our first impressions from the initial track drive. 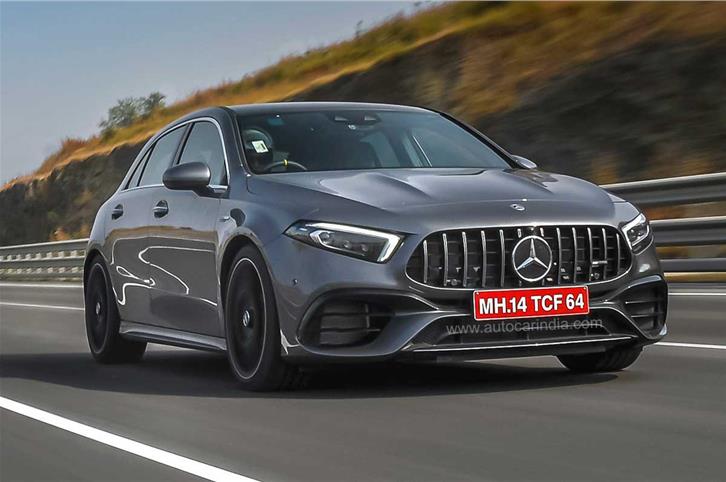 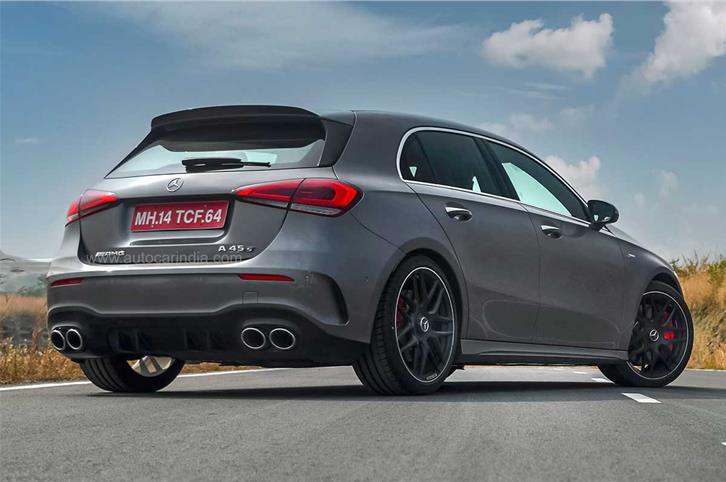 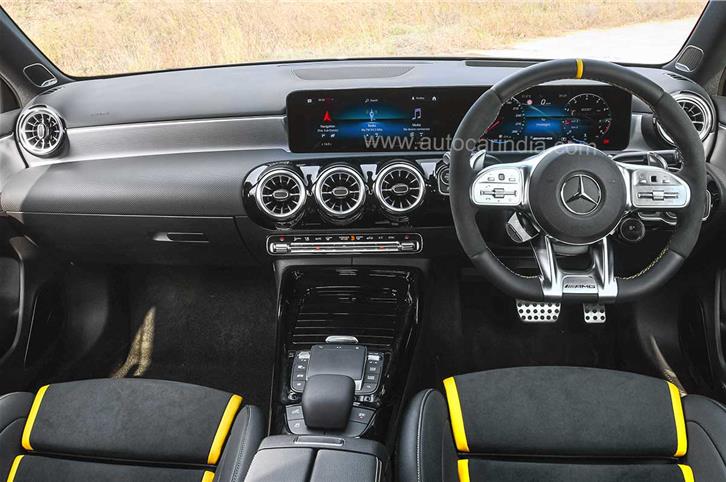 AMG’s A45 S is among the most powerful hatchbacks in the world. It has so much power that calling it a hot hatch somehow feels wrong. Under the hood sits a 2.0-litre, four-cylinder engine that puts out a record-breaking 421hp. Not 200, not 300, an incredible four hundred and twenty-one horses, enough to embarrass a V8. This makes it a champion when it comes to specific output. And then, because it is turbocharged, with a watermelon sized turbo, it also makes a massive 500Nm of torque.

On the outside, the A45 S is clearly more aggressive than a regular A-Class hatch. There is AMG’s big Panamericana grille up front, a big front air dam, side skirts, a rear spoiler and four large round exhausts at the rear; the latter really hit the spot. Then the big 245/35 Z-rated Michelin Pilot Sport (4) S tyres fill the wheel arches and help give it an extremely sporty stance. 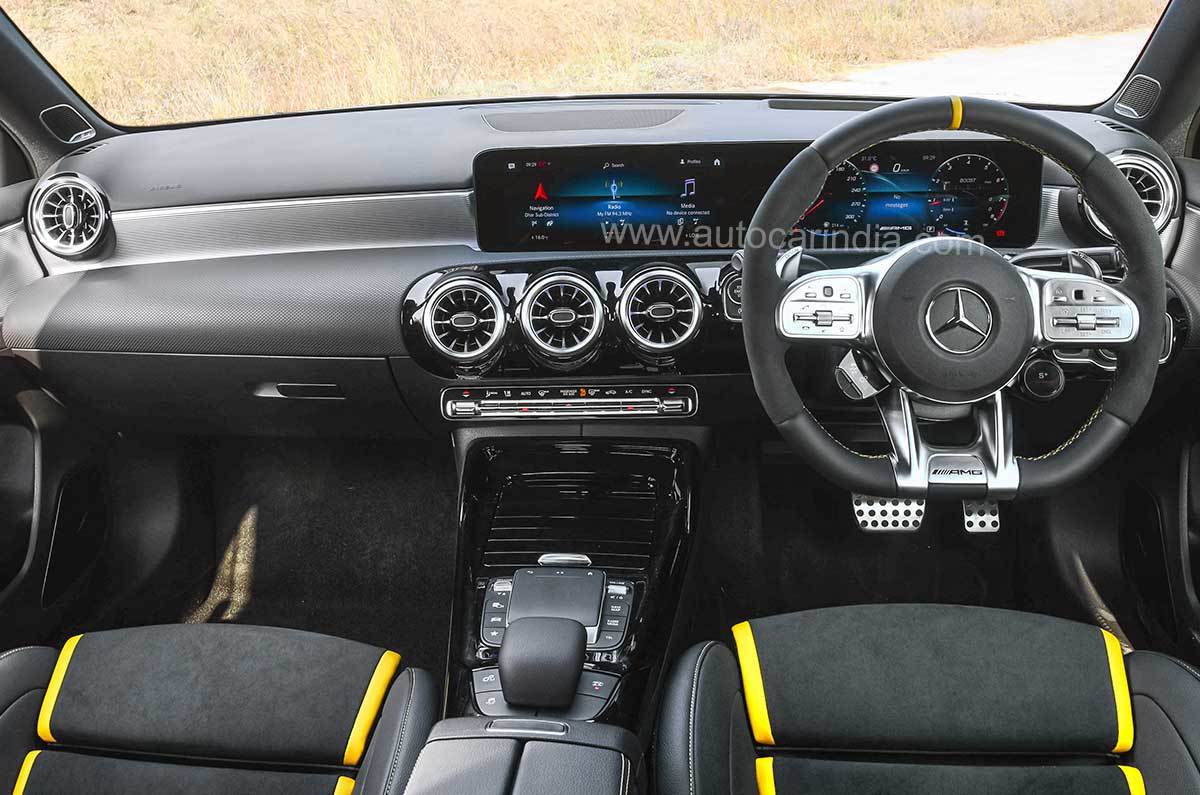 On the inside, the A45 S is actually similar to the A35 sedan up front. You get sportier trim and in the rear, the seats are placed a bit low and there isn’t as much legroom as on the sedan. Still, what hits home is the Merc’s high-quality cabin. Standard features include dual 10.25-inch screens with MBUX infotainment system and AMG performance displays, a Burmester hi-fi audio system, and a decently sized sunroof. And, of course, you get AMG’s Dynamic package. Optional equipment gets you ‘advanced’ sports seats with heating, massage and memory functions, a head-up display, a chrome exterior package, and driver assist systems like a 360-degree camera, lane keep assist and blind spot warning. But what’s it like to drive? Let’s go straight in.

Mercedes AMG A45 S: what’s it like at high speed?

Now first up, this isn’t a full review, it’s far from it. We only got to drive the car on a high-speed track. But what it is, is a full-throttle review . . . Mercedes has lined up something rather special and allowed us to experience this car’s electronically limited top speed of 270kph in a safe and controlled environment. As you may have guessed, we are at the world-class NATRAX testing facility outside Indore, where the 11.3km high-speed bowl allows you to access speeds in excess of 200kph with consummate ease. 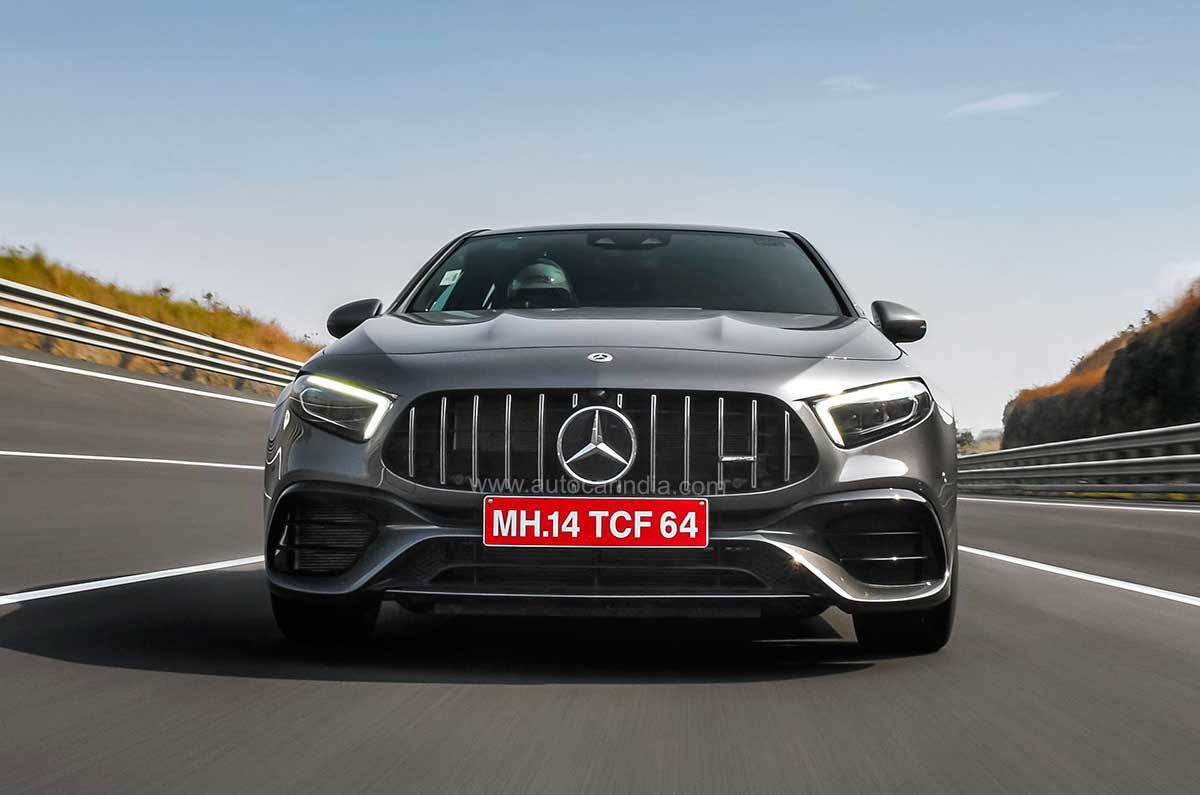 As we set off from the parking lot, the first thing that draws my attention is the raucous exhaust note. There’s no big, chesty V8 rumble and those fruity pops and bangs AMG V8s are famous for are missing, but what you get in its place is an almost rally car-like blare, especially in ‘Race’ mode. It sounds gritty in the top end, snarls nicely as you cross 5,000rpm, and it even sounds trashy and a bit OTT towards the 7,200rpm redline. Have to say I like it ...a lot.

The next thing that gets my attention is just how responsive the engine feels. On the out lap, I shift up early, just to see how it responds. What’s clear is that this is no heavily modded motor with a big turbo and massive turbo lag. Sure, there is turbo lag at low speeds, but what lag there is gets masked by the twin-clutch gearbox and short gearing, and then, when I put my foot down even at 2,500rpm, it pulls forward in an urgent manner. Cross 4,000rpm, however, and an avalanche of torque just seems to erupt from below the bonnet. And then after 5,000rpm, the engine just seems to run away from you with a feeling of unstoppable energy and momentum all of its own, with the A45 S feeling like it’s getting ‘sucked’ forward. The twin-clutch ‘box snaps you into the next gear before you hit the 7,200rpm limiter; keep your foot down and it seems to accelerate like a rally replica. In fact, this feels more like a Mitsubishi Evo and Subaru Impreza rival than a VW Golf GTI rival. 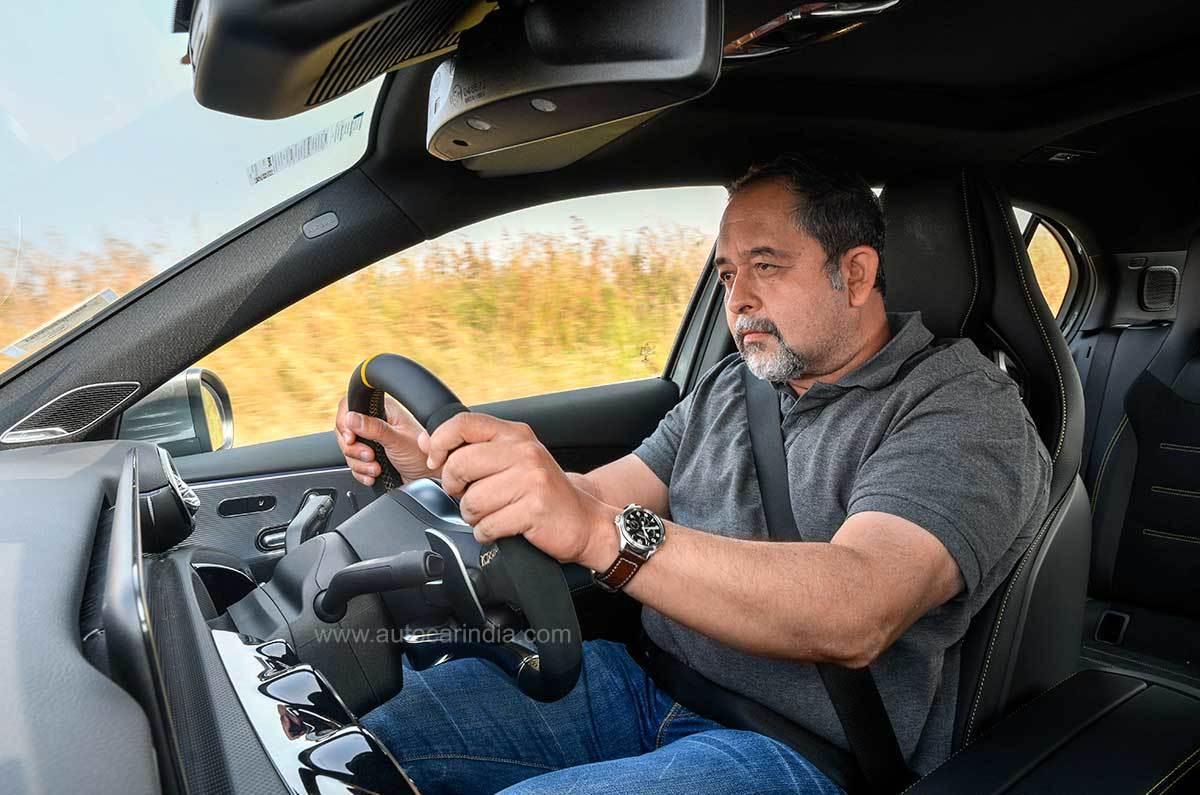 Then, as I pass 200kph, I expect some slacking off in pace. And yes, compared to the larger E 63 S, there isn’t that same sort of energy and trust. But what still blows me away is that there is no stretch or strain even at these speeds, as it runs up and head-butts the limiter at 270kph; roughly 280 on the speedo.

The A45 S also feels extremely stable at speed – 200kph feels rock-steady, you feel cross-winds a bit more as you cross 240kph, and then accelerate hard at these speeds and you do feel the car shuffle power back and forth as you put the power down. Even the steering responds pretty well at medium and high speeds, and it doesn’t feel overly aggressive as it does on some hot hatches. I, however, can’t tell you how it drives around corners, how well the Drift mode works, or what it’s like to drive on everyday roads – that will have to wait for our full review. 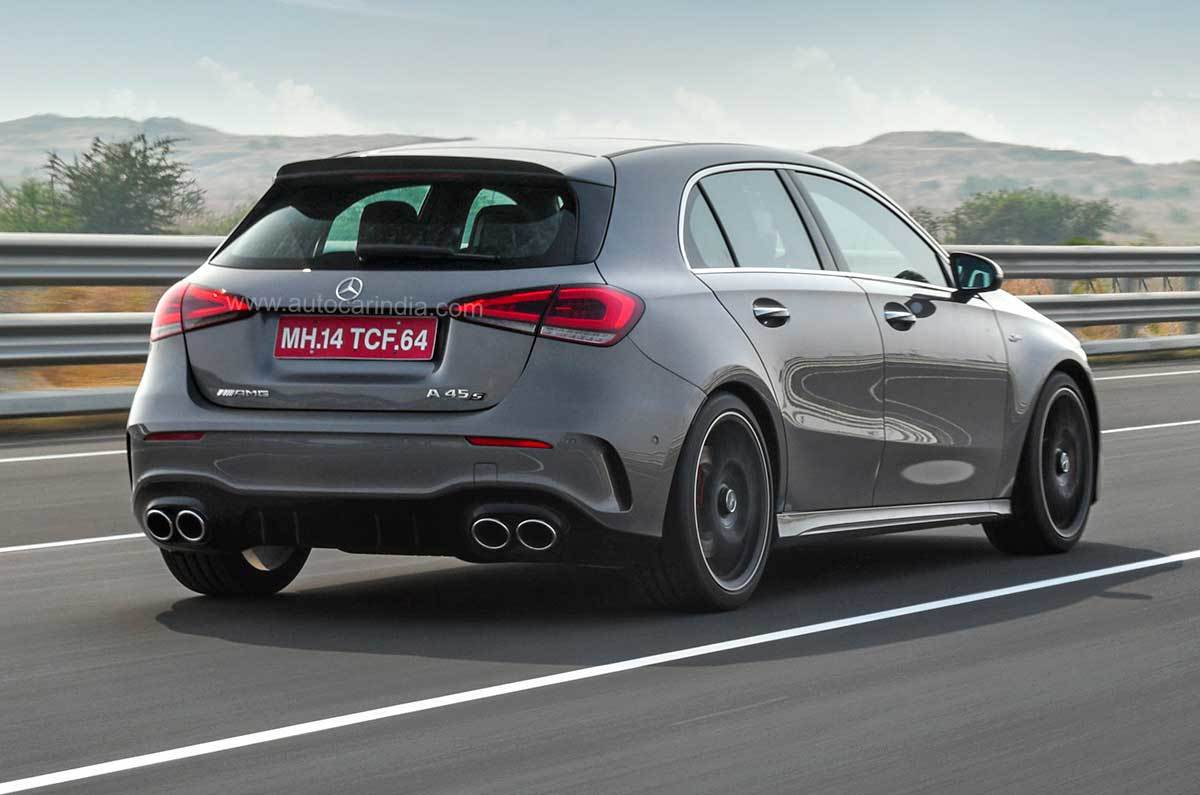 What I can tell you is that ‘launch control’ feels just epic. All you have to do is shift to Race mode, put your left foot on the brake, get the revs up and launch! AMG claims a 0-100kph time of 3.9sec, but this feels quicker still. It’s just so easy to access and so much fun, traffic lights will never be the same.

Mercedes AMG A45 S: what’s it like under the skin?

So just how has AMG transformed a luxury hatchback into a pocket rocket. First up is the 2.0-litre engine that gets 421hp and 500Nm of torque. Interestingly, the engine just doesn’t dump the torque out to the four wheels, AMG has tuned the engine to deliver pulling power when it is needed most. This "torque shaping" shifts peak torque output up the powerband, so the maximum output is delivered at a relatively high 5,000-5,250 rpm. AMG engineers say this helps give it a power delivery akin to a naturally aspirated engine and the increasing torque at higher RPM makes it more free-revving. In addition, a new twin-scroll turbocharger helps give both, plenty of responsiveness at low-engine speeds and loads of high-power output in the upper RPM range. To help improve exhaust flow to the turbo, the exhaust manifold is divided into individual ducts. The aim is to prevent the individual cylinder pulses from interfering with each other when load cycles overlap. To improve responses further, the turbo gets roller bearings. These reduce mechanical friction within the turbocharger to a minimum, allowing it to respond more readily and reach its maximum speed more rapidly. When spinning at its maximum speed, the turbo put out a high 2.1 bar, another record for an engine of this type, and AMG has used an electronically controlled wastegate (exhaust relief valve) that allows the charge to be controlled precisely, especially when accelerating at partial load.

As you can imagine, the turbo would be generating tremendous heat, and to cool it, AMG uses fresh air, along with oil and water. The concept is based on the principles and experience gained with the turbochargers mounted in the hot-V of the AMG 4.0-litre V8 engines.

On the inside, the engine uses a lightweight forged-steel crankshaft and forged-aluminium pistons, and the cylinders are lined with Nanoslide to reduce friction. The engine uses both direct and indirect injection and the intercooler works, uniquely, in conjunction with the air conditioning system and a second condenser. So, this clearly is not an everyday four-cylinder engine. 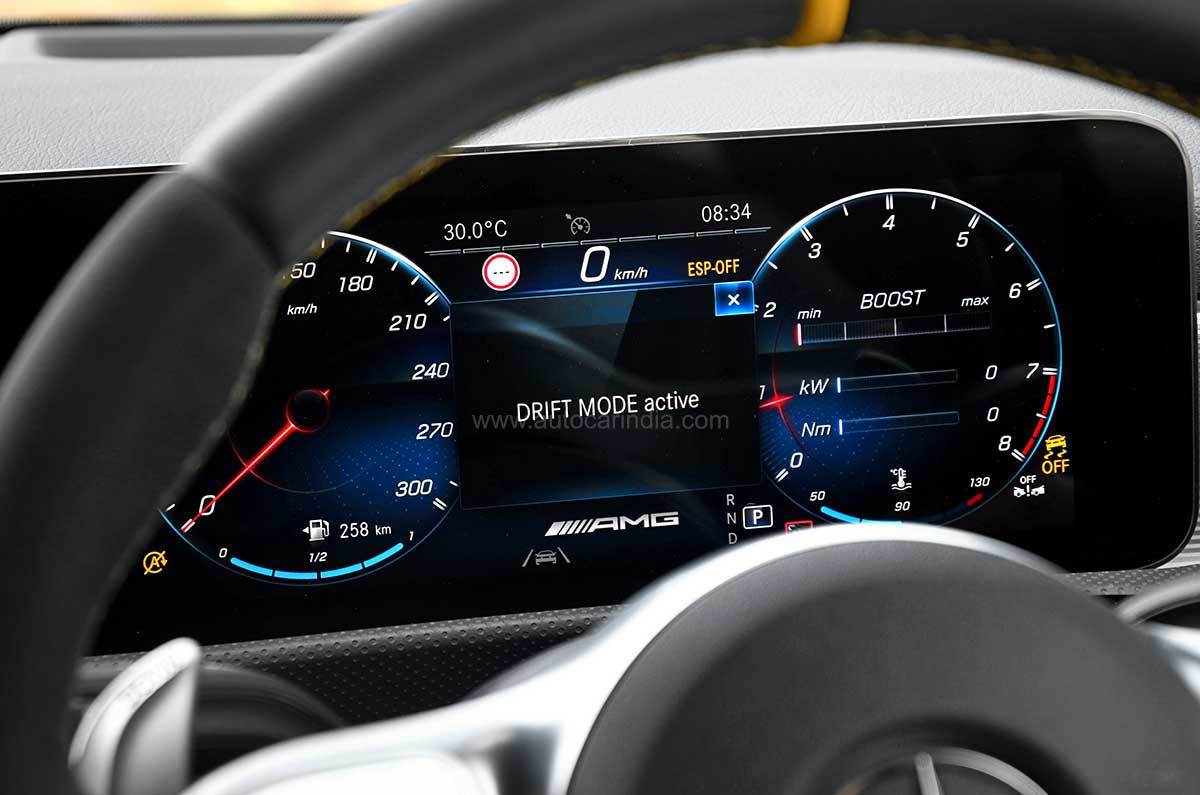 Further downstream, an 8-speed dual-clutch gearbox and AMG’s 4Matic+ system are used to send power to all four wheels. The system can send as much as 50 percent of the engine’s torque to the rear axle, where a new rear differential with two multi-disc clutches sends power to either wheel. This has enabled AMG to install a Drift mode, along with the AMG Dynamics suite of driver assistance programs that work on steering response, the four-wheel-drive system, and stability control in stages.

Apart from new springs, adjustable dampers and stout anti-roll bars, AMG has also rebuilt the front end of the hatch to make it stiffer. It has given the A45 S a wider track, larger wheel arches and big-bore quad exhausts. 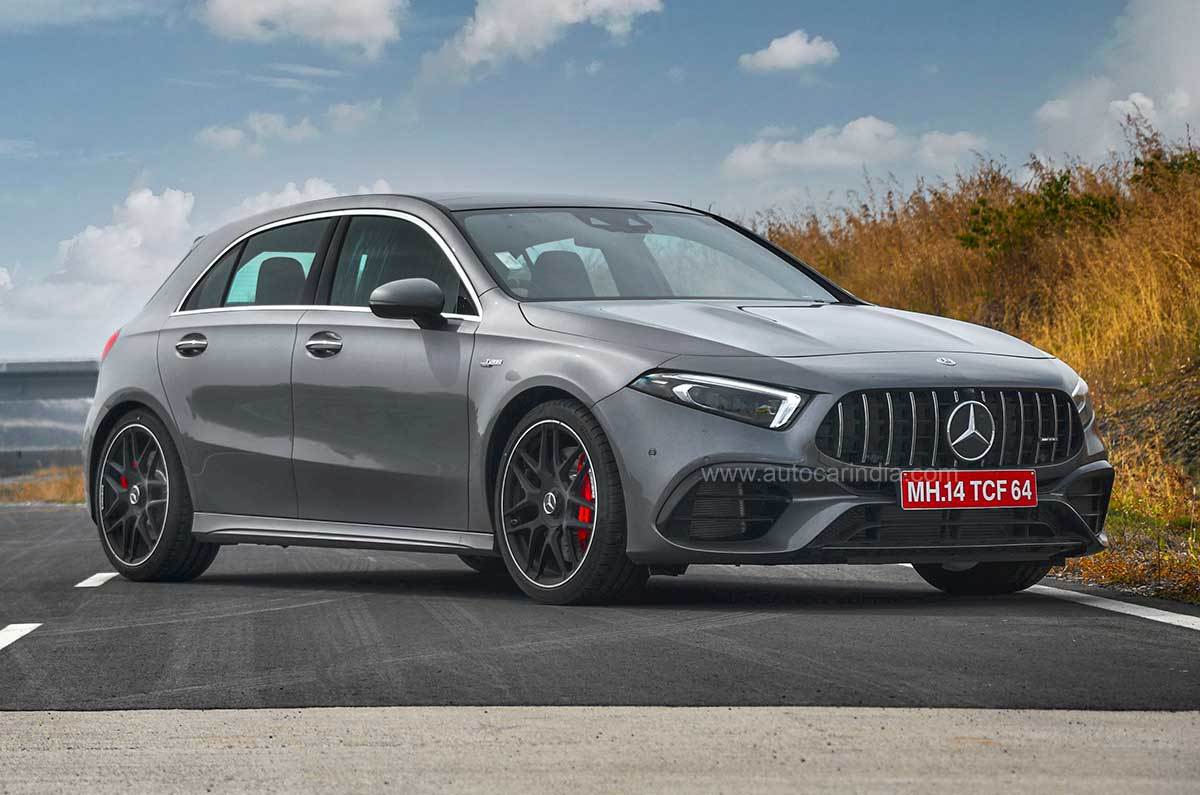 The Mercedes-AMG A45 S is the most powerful hot hatch yet. It has, pound for pound, the most powerful four-cylinder motor around, and with it, as we’ve experienced, raw pace that transcends the hot-hatch genre. But is this super hatch worth Rs 79.5 lakh (ex-showroom)? Just how much does it thrill you around corners? What’s it like to drive on our everyday roads and, importantly, should you consider a traditional sportscar instead? These, unfortunately, are questions we can only answer once we do a full review. What we can tell you, and with a fair amount of certainty, is that there’s simply nothing like it. It’s loads and loads of fun and clearly worthy of AMG’s S badge. It’s that special.

Any chances of the Mercedes-AMG GLA 45 S making it to our shores.

Any chances of the Mercedes-AMG GLA 45 S making it to our shores.