System comprises liquid-cooled lithium-ion battery pack and a 300V motor; first Tata model to use the new EV tech will launch in early 2020. 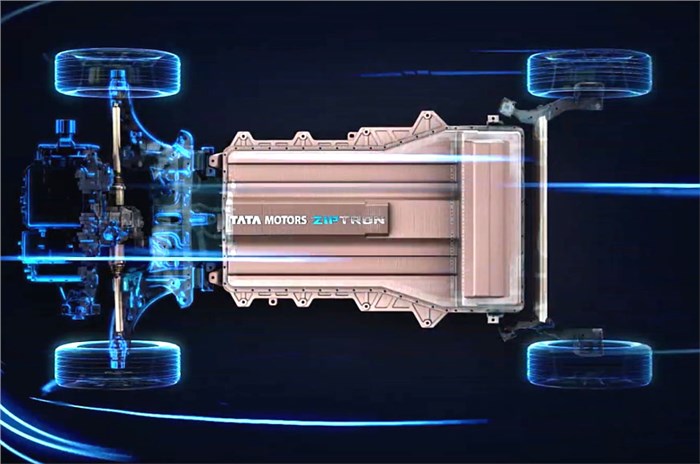 Tata Motors is presently one among few carmakers to manufacture electric cars in India. The auto major is set to amp its presence in the segment and has revealed details of new technology that will form the basis of its future EVs. Branded ‘Ziptron’, the electric-vehicle technology will first be used on a model confirmed for launch in early 2020.

Tata Motors says Ziptron has been developed keeping Indian climatic and traffic conditions in mind, and also addresses typical EV buyers' concerns of performance, range and safety. A team of 350 engineers worked on the project that encompassed over 1 million kilometres of testing during the development programme.

While Tata Motors has not revealed final specifications as yet, company spokespersons announced that cars built with Ziptron will have a “minimum range of 250km” and will support fast charging. The battery pack comprises lithium-ion cells and features liquid cooling to maintain the ideal operating temperature. Typically, extremes of temperature have a huge impact on the performance of the battery system. The battery pack comes encased in a high-strength steel casing and boasts an IP67 rating – among the highest standards for waterproofing and dust protection. Tata Motors will offer a standard eight-year warranty on the battery pack and motor. The modular battery system will find use on adapted and ground-up electric vehicles from Tata Motors.

The high-voltage 300V-plus permanent magnet synchronous electric motor also promises to be leagues ahead of the 72V AC induction-type motor on the Tigor EV in performance and output. The motor will come mated to a single-ratio transmission that has been optimised for Indian traffic. Ziptron cars will also feature drive modes to give drivers the option to maximise range or enhance performance.

Earlier this year, Tata Motors announced four new models including "at least one EV" to be in the pipeline. And it is the Nexon Electric that will be the first model to feature Ziptron tech.

Tata Nexon EV in the works