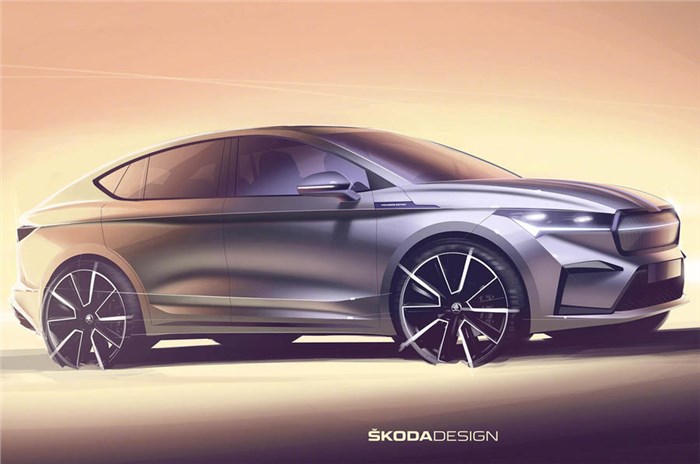 According to the sketch, the Evyaq Coupe carries over much of the standard EV's design, but what immediately stands out is the coupe-like raked roofline and altered window line down the sides. The sketch also depicts a more aggressive front bumper.

Previous teasers have revealed that the coupe carries forward elements such as the illuminated butterfly grille, headlamps and tail-lamps from the standard Enyaq with the cabin design too expected to mirror the regular electric SUV.

Skoda claims a drag coefficient of 0.234 for its new coupe-SUV, which is said to be the best in its class and makes the new model “particularly efficient to drive”.

Skoda has not confirmed whether it will offer the same variety of powertrain layouts in the coupe. The standard Enyaq can be had with either a 179hp or 204hp rear-mounted motor, or with a motor on each axle for a combined output of 266hp.

Skoda kicked off the year with the launch of the petrol Skoda Kodiaq facelift. The carmaker is eyeing the launch of six new models (some new and some variants), with a target of selling 70,000 cars this year. The Kodiaq is the first of the new launches, with the next one expected to be the all-new Slavia midsize sedan in March. Also on the cards is a new Monte Carlo trim for the Kushaq midsize SUV.

The carmaker also has plans to bring the standard Enyaq iV to India, but it remains to be seen if this upcoming coupe sibling could make it as well.