A majority of EV owners generally use home chargers, rarely needing a trip to a public charging station. 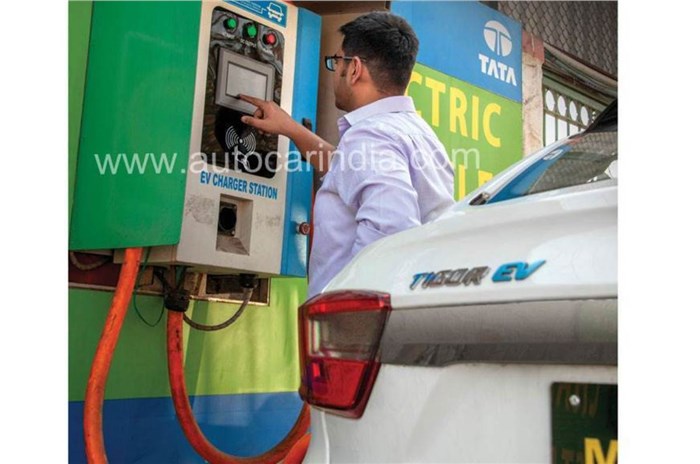 Home charging is the dominant trend

Commenting further on the scooter landscape, the senior Ather executive said, “The average commuter does not do more than 70-80km a day.” To that end, using a home charger to top-up the battery overnight fulfils most of the customers’ requirements. “Hence, a lot of our energies go into making the home installation seamless,” he added.

Echoing similar sentiments from an electric carmaker’s perspective, Sandeep Bangia, Head, Electric Vehicles and Home Automation, Tata Power, mentioned, “Interestingly, there are not too many cars which end up going to a public charging station because they have a home charger of 3.5kW or 7.5kW capacity, which is perfect for their weekly commutes. If they charge once every week at home, they really don't need to go for public charging.”

This could take care of most anxiety issues, related to charging, that prospective owners might have, and enable them to take the plunge for an EV. “Most cars in India today come with a (home) charger – it's a bundled price. But as you go along, and that is the global trend, cars may not come bundled with a charger because you could buy that separately. That is where the equation will head to,” said Bangia.

Still, apprehensions about viable charging alternatives run high, and need to be addressed through better awareness, opined the MD & CEO of Mahindra Electric, Mahesh Babu. “The customer still questions where the public charging stations are, ignoring that there is enough charging available at homes, offices, and other places, like eateries or malls, with a simple 15A plug.”

While the high usage of home charging is encouraging, it could also indicate that EVs are generally city bound, and mostly purchased by people with reserved parking facilities. What does one do while travelling over long distances? And what about someone who can’t have a personal charging setup because of the lack of a dedicated parking spot at home?

“There are a lot of apartments where people don't have a designated slot, but they have a pooled area where cars are parked. So, that is a place where we can put up a shared charger,” said the Tata Power chief. He added, “We are putting up a digital platform or consumer application for such chargers which can be shared.”

The Ather charging infrastructure director doubled down on a similar solution. “Our understanding is that while apartments do not have dedicated parking spots, they have areas where two-wheelers are parked. The charging infrastructure which we are talking about is not very complicated because electrical lines are passing through all places. So it basically boils down to a shared model.”

Public charging facilities to serve as an assurance

Speaking on the role of public charging facilities, Tata Power’s Sandeep Bangia mentioned, “It’s only when you cover a long distance, that you need a (public) 50kW DC fast charger.” Elaborating further, Ather’s Nilay Chandra said, “A person, for 90-95 percent of his journeys, does about 40km.” However, for that occasional journey where he expects longer running, he should be able to drive into a charging station for a quick top-up. “The consumer needs an infrastructure in a public environment as a safety or insurance,” said the two-wheeler expert. He added, “An infrastructure gives confidence to the consumer that he won’t get stranded on the road.”

Moreover, while home charging solutions are relatively inexpensive, commercial-scale DC fast charging stations can easily cost to the tune of Rs 15-20 lakh to set-up, or even more. Despite the high cost and low utilisation, EV makers are still trying to expand the public network. Tata, for instance, has set up about 375 such stations across the country, and plans to grow the numbers. Ather is adopting a similar strategy. “It still makes sense for us to keep investing. We are not looking at how much we are making out of the charging infrastructure business. For us, the entire game as an OEM is to reduce the barrier to adoption of electric vehicles,” said Chandra.

But what would be the optimal distribution of EV chargers to quench the issue of range anxiety among prospective buyers? “That depends on the penetration of electric vehicles, as and when it happens,” said Bangia. Commenting on electric four-wheelers, he added, “Most vehicles have a range of 250-odd kilometres, so it might be a good idea to have a fast charging station at a distance of every 50-75km.”