All-electric crossover likely to arrive as a full import with an expected price of over Rs 45 lakh. 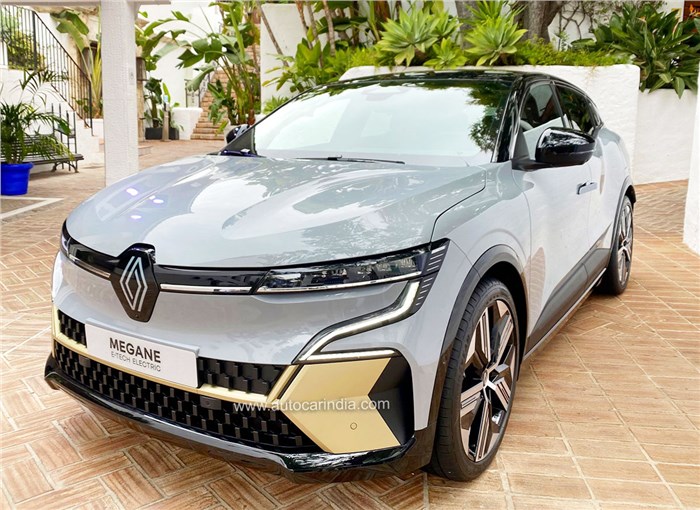 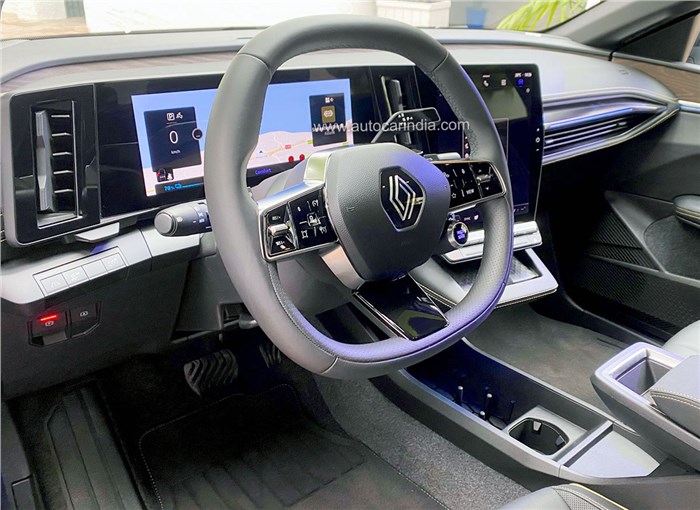 Dashboard dominated by dual displays for instrumentation and infotainment.

Renault is considering entering the Indian EV market with the all-electric Megane E-Tech. Revealed at the Munich Auto show last year, the new Magane E-Tech is the first Renault to sit on the purpose built CMF-EV platform.

The Megane E-Tech isn’t the first car from Renault’s international line-up to be considered for India. The carmaker is also considering bringing the Arkana SUV coupe in a bid to increase interest in the brand. You can read more on that here.

The Megane E-Tech borrows its design from the Megane eVision concept from 2020, with much of the basic look of the concept carried over in a more toned down form. The crossover-inspired theme of the concept too is carried over with cladding along the lower edges of the vehicle, with contrasting inserts on the bumpers depending on the colour.

Inside, the cabin blends tech and minimalism with the dashboard being dominated by Renault’s OpenR display – an L-shaped arrangement featuring the 12.3-inch instrument display and a 12-inch portrait style infotainment touchscreen. Compared to the standard Megane hatchback, the E-Tech sits on a longer wheelbase, which could also hint at a roomier cabin.

As mentioned previously, the Megane E-Tech is underpinned by Renault’s purpose-built CMF-EV architecture with two battery pack choices – 40kWh and 60kWh. The Megane E-Tech can also be had with two electric motor outputs – a base 130hp and 250Nm, or a more powerful 218hp and 300Nm set-up. Renault claims a range of up to 470km depending on the battery pack used. However, it remains to be seen which configuration of the Megane E-Tech could be brought to India.

Renault Megane E-Tech: could arrive as a full import

The Megane E-Tech isn't the first EV Renault has considered for India. The carmaker, at the 2020 Auto Expo, had also showcased the Renault Kwid-based City K-ZE electric hatchback, and the more premium Zoe EV, with both models having been considered for India, with plans of local assembly.

For the Megane E-Tech, meanwhile, Renault is likely to import the all-electric crossover as a CBU, as a halo EV model. The Megane E-Tech is expected to be priced upwards of Rs 45 lakh, which would put it in a similar bracket as the recently launched Mini Cooper SE EV and well clear of other EVs currently in the market.

Renault Duster production ends in India after almost a decade