The electric hatchback features an electric motor that can produce 44hp and 125Nm of torque, and is built on the same CMF-A platform as the Kwid. 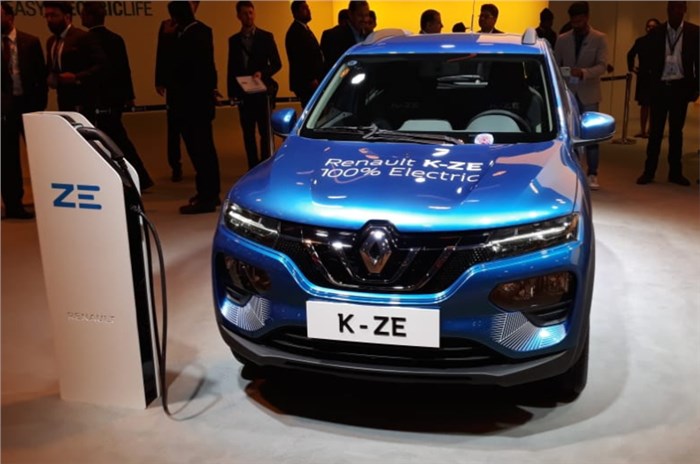 Renault has just taken the covers off the K-ZE electric vehicle, as it makes its first appearance in India at the 2020 Auto Expo. The K-ZE is based on the Renault Kwid hatchback, which uses the CMF-A platform. Renault has plans to assemble the electric hatchback in India, with a launch expected later on.

Power for K-ZE comes from a 26.8kWh lithium-ion battery pack, which powers an electric motor that can produce a peak output of 33 kW (44hp) and 125Nm of torque. This is also the same configuration seen on the China-spec City K-ZE. On a full charge, the all-electric hatchback has a claimed range of 271km (NEDC cycle). The battery can be topped up in 4 hours via an AC charger or go from 30-80 percent in just 30 mins through a DC fast charger.

The styling of the K-ZE is not vastly different from that of the petrol-powered Kwid that’s available in our market. It features a similar split-headlight design with LED DRLs, restyled front and rear bumpers, along with an almost identical overall silhouette. Although, the front grille differs from its petrol-powered counterpart, as it has a closed and more aerodynamic design.

On the equipment front, the K-ZE features an 8.0-inch touchscreen infotainment system with Android Auto and Apple CarPlay support, part-digital instrument cluster, dual-front airbags, a tyre pressure monitoring system and a rear parking camera. The gear selector knob on the centre console is also the same as the unit available on the Kwid AMT.

Renault India’s Managing Director, Venkatram Mamillapalle, stated that the K-ZE electric hatchback will be launched in India “within the next 2 years”. Once launched, the Renault Kwid EV could undercut Mahindra Electric's eKUV100 and be the most affordable electric vehicle in our market.