New Gurkha will be powered by a 90hp, 2.6-litre diesel engine; will get four-wheel drive with locking front and rear differentials. 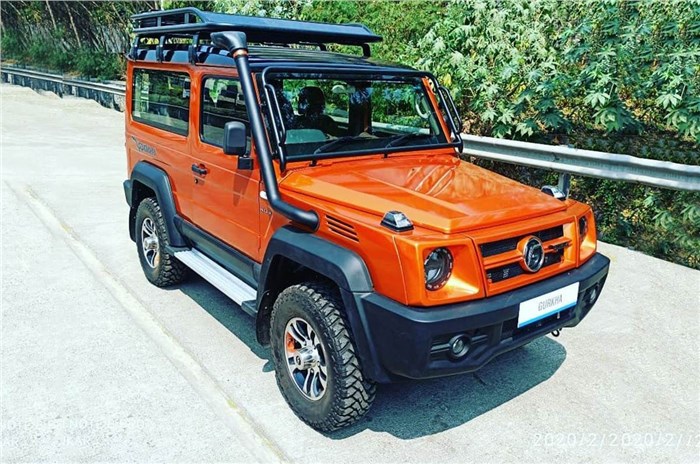 Force Motors will be revealing the new Gurkha in production-spec on September 15, 2021, after showcasing it at last year’s Auto Expo. In the build-up to the debut, Force Motors has released a slew of teasers revealing some of the details of the upcoming SUV.

The new Gurkha, while similar in design to the outgoing model with its boxy and upright looks, has received a number of changes. The body shell is new while the chassis has been upgraded to meet the latest safety regulations. Notable styling updates over its predecessor include the new LED headlamps with Daytime Running Lamps, a revised grille, new bumpers, larger windows for rear passengers and a wider rear windshield. Like its predecessor, the new Gurkha too will come fitted with a snorkel and wear the 4x4x4 badge.

The cabin too is a step up from before with more creature comforts including front-facing captain seats at the rear, which replace the side-facing bench seats of its predecessor. The show car also had a pair of jump seats in the rear, although it remains to be seen if they will be standard fit. The SUV at the Auto Expo featured a dual-tone interior, but in a slew of teasers released by the company, the production-spec SUV seems to be getting a matte-black finished dashboard and centre console.

Force Motors has also confirmed an upgraded features list for the Gurkha including a touchscreen infotainment system – a first for the SUV, the aforementioned LED headlamps, individual armrests for the rear passengers, rear wiper and air conditioning.

Furthermore, Force Motors will also offer a long list of customisation options for the new Gurkha, in a bid to boost sales of the off-roader.

At the Auto Expo, Force Motors confirmed that the new Gurkha will carry forward the old 90hp, 260Nm, 2.6-litre diesel engine upgraded to meet BS6 norms. The unit will come paired to a 5-speed manual gearbox. The outgoing Gurkha Extreme’s 140hp, 2.2-litre diesel engine, however, is unlikely to return.

As before, four-wheel drive will be available along with locking front and rear differentials – the latter via levers on either side of the floor console between the driver and passenger.

The suspension too is expected to be retained from the outgoing model with independent double-wishbones up front and five-link, rigid-axle arrangement at the rear, with coil springs at all four corners.

The Force Gurkha will remain a purpose built off-roader at heart, with the added creature comforts set to make it more appealing to lifestyle buyers. The SUV will go up against the second-gen Mahindra Thar when launched.