President Ram Nath Kovind was expected to get a new Mercedes-Benz S 600 Pullman Maybach Guard in time for the next Republic Day; savings generated by this and other cost-cutting measures will aid the poor affected by the COVID-19 crisis. 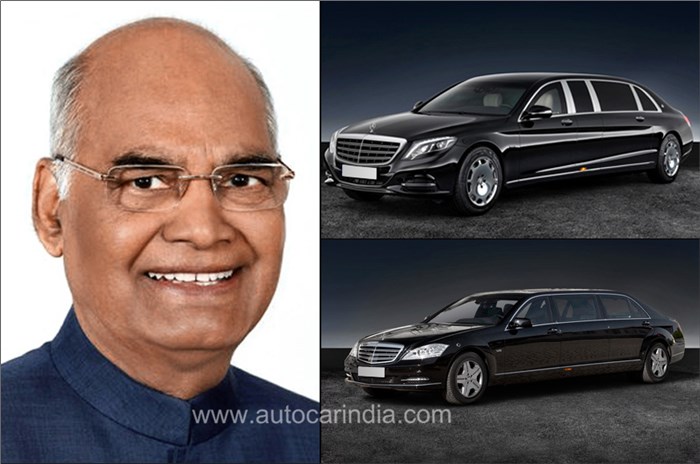 In a bid to cut costs during this trying time, the President of India’s office has adopted several measures, one of which is said to be Ram Nath Kovind’s new Mercedes-Benz S 600 Pullman Maybach Guard will not be bought. Before these initiatives were put in place, our President was expected to be seen in his new high-security limousine at the 2021 Republic Day celebrations.

The latest Mercedes-Benz S-class Pullman Maybach Guard was unveiled for international markets in 2018. It is a formidable yet extremely comfortable vehicle. It easily costs upwards of Rs 15 crore (on-road, including options) and is fitted with ERV (Explosive Resistant Vehicles) 2010-level and VR9-level protection for its occupants. The former means it can withstand up to 15kg of TNT from a distance of 2m; while the latter indicates that it’s capable of withstanding 7.62x51mm rifle rounds – even bullets fired from an AK-47 will not be able to penetrate this S-class’ floor, body or glass. Since it is meant to carry the President of India, it is expected to have some classified modifications for both safety and comfort.

The interiors of the S 600 Pullman Maybach Guard are as plush as you can imagine, putting even business class seats on airplanes to shame. Despite weighing more than five tonnes, this armoured limousine is no slouch thanks to the 6.0-litre twin-turbo V12 engine that puts out 530hp and 830Nm of peak torque.

As its replacement is not due soon, the President of India is expected to continue to use the Mercedes-Benz S 600 Pullman Guard (based on W221 S-class) that made its global debut back in 2011. This model came into use during the tenure of President Pranab Mukherjee and still offers a near tank-like resilience against ballistics and the like; it comes with VR7-level protection. It’s as opulent and customisable inside as its more modern counterpart; but is powered by a slightly smaller, 5.5-litre twin-turbo V12 petrol engine producing 517hp and 830Nm of twisting force.

Other measures taken by the President’s office to cut costs include a less-than-usual lavish spread for visiting dignitaries, a moratorium on new construction at Rashtrapati Bhavan and a limitation on flower decorations. The savings from these cutbacks are to help the nation’s poor that have been affected by the COVID-19 pandemic and subsequent lockdown.

Coming back to high-security Mercedes cars, there aren’t many S-class Pullman Guard models in India. However, you do end up finding the ‘standard’ S 600 Guard in India from this generation (W221), which are owned by many businessmen and even some celebrities.

Considering the standard next-gen Mercedes-Benz S-class has not made its global debut yet (we’ve got leaked images of the model and new details on it though) the armoured version of the 2021 S-class and all its derivatives are still a while away from being revealed. The all-new S-class in standard guise is expected to arrive in India in the second half of 2021. While there’s no word on its armoured siblings or the range-topping Maybach versions, Mercedes India introduced the S 600 Guard back in 2015 for a whopping Rs 8.9 crore (ex-showroom).