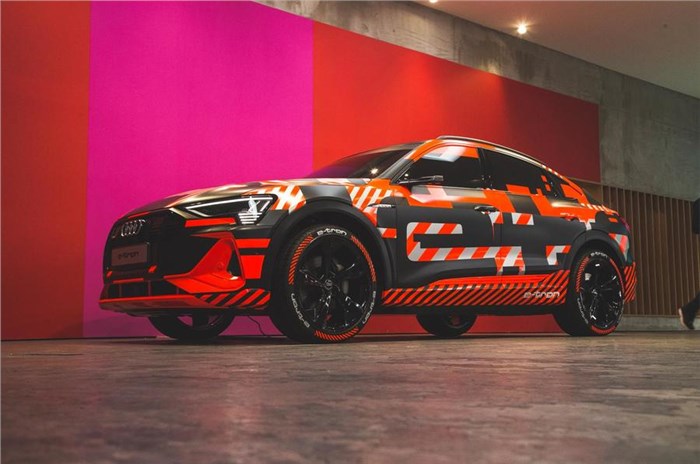 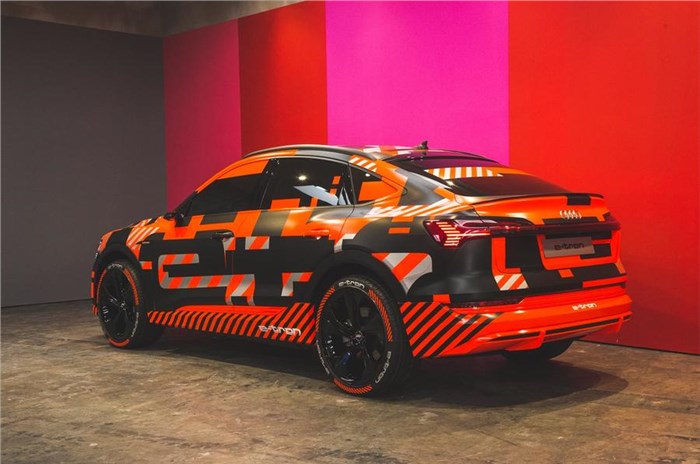 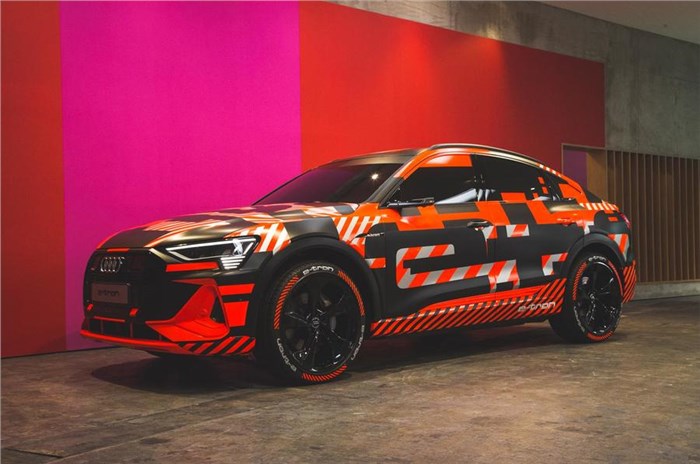 Audi has taken the wraps off a camouflaged prototype of the E-tron Sportback SUV at the 2019 Geneva motor. Sporting an orange finish, the pre-production model provides the closest look at the coupé-inspired, all-electric SUV that is expected to go on sale in international markets towards the end of 2019.

The E-tron Sportback is understood to share its platform and powertrain with the E-tron quattro SUV, but with a sportier design to help it take on Jaguar's I-Pace.

The camouflaged prototype was recently seen near an Audi test centre, sporting a more traditional front grille design than the Sportback concept that made its debut at the 2017 Shanghai motor show. The model showcased in Geneva, however, gets the digital rear-view camera, instead of traditional door mirrors, seen on the E-tron quattro as an optional extra. The tail-lamps here seem to be the same LED bar units first seen on the A8, which are quickly becoming a staple of premium Audi models.

This pre-production model concept mixes the lines of a liftback with the stance of a four-seat SUV to create what Audi claims to be is 'a new class of car', and is meant to attract buyers who might have previously considered an A7 Sportback but want a more commanding view of the road. The E-tron Sportback displayed at the show is fitted with 23-inch alloy wheels.

The car’s electric powertrain negates the need for a conventional front grille through which air can flow, but Audi has applied its familiar design language to the nose. However, there is a new ‘bridge’, formed by one vent at the top of the grille and another at the front of the bonnet, through which air can be channelled.

The E-tron Sportback SUV-coupé comes with what Audi describes as 'next-generation digital lighting technology' to enable the use of matrix LED full-beam headlights. It also introduces new DRLs that project their light onto reflective sections of bodywork, instead of directly outwards. They also double as scrolling indicators that are accompanied by matrix laser lights located under the front and rear bumpers that project turn signals onto the road.

The E-tron Sportback has three motors – two that power the rear wheels and one for the front wheels. Maximum combined outputs are 503hp and 800Nm of torque, which enables a claimed 0-100ph time of 4.5sec and a restricted top speed of 210kph. The production version of the E-tron quattro produces 408hp and 660Nm in Boost mode; it achieves the 0-96kph sprint in 5.5sec. The production-spec car is likely to offer similar performance.

In most driving conditions, only the front motors are used, with the two rear motors adding torque in high-load or low-grip conditions. The powertrain can be switched to permanent four-wheel drive should the need arise, and the rear axle shuffles power between the wheels via torque vectoring. All three motors can recover energy during braking and coasting, and the intensity of energy recovery is adjustable through four levels.

The car showcased at Geneva has a 95kWh battery pack that can be charged wirelessly using an AC home charger or a DC rapid charger. The rapid charging method currently peaks at 50kW, but by the time the E-tron Sportback reaches production, 150kW will be possible. That will allow the car to charge its batteries to 80 percent in just 30 minutes. The driving range from fully charged batteries is expected to exceed 500kph.

The battery pack is located low in the car’s structure and the overall weight distribution is 52/48 percent front/rear. The concept weighs over 2.000kg and makes use of carbonfibre and aluminium in its structure (which is based around the MLB platform) to keep the weight as low as possible. The E-tron Sportback’s length and wheelbase are almost identical to the A7’s, but it’s wider and stands 1.53m tall – which is 110mm taller than the A7 – to offer more cabin space.

Inside, Audi has installed an upgraded version of its Virtual Cockpit dashboard with touch-sensitive surfaces and a wider wraparound design. There’s a digital instrument cluster, two touchscreens with haptic feedback in the centre console, and a slim digital display in front of the passenger.

Driver and safety assist systems are identical to those found in the flagship A8 sedan, including piloted drive and park. Audi claims the technology on the production car will be even more advanced.