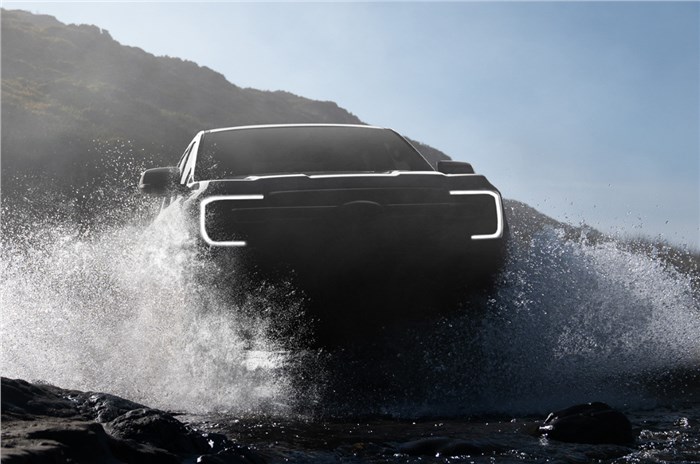 Ford Australia has teased the upcoming, next-generation Ranger pick-up truck. Set to make its debut on November 24, the new Ford Ranger will go on sale in international markets sometime next year.

All-new Ford Ranger: what to expect

While the teaser doesn’t reveal much, it does show the presence of a large front grille with the Ford logo in the centre, C-shaped LED Daytime Running Lamps and a contoured clamshell bonnet.

The new Ford Ranger will be based on an updated version of the outgoing model's T6 body-on-frame platform that made its debut on the Bronco SUV. The updated platform has a slightly bigger footprint and can support hybrid powertrains. Ford is currently testing single cab, super cab and crew cab body styles of the Ranger, with a high-performance Raptor also undergoing tests in some regions.

Inside the cabin, the next-gen Ford Ranger is expected to get a 15.5-inch, portrait-oriented touchscreen likely running Ford’s SYNC 4 infotainment system. Furthermore, a 12-inch digital instrument cluster and wireless integration for Android Auto and Apple CarPlay is expected as well.

While Ford is yet to confirm any details, it is expected that the new Ranger will share its powertrains with the Bronco. The Ford Bronco gets a 270hp, 2.3-litre, four-cylinder turbo-petrol and a 310hp, 2.7-litre twin-turbo V6 petrol. The smaller capacity engine gets a 7-speed manual or 10-speed automatic gearbox, while the larger 2.7-litre engine comes only with the 10-speed automatic.

As for the Ranger Raptor, it is expected to come with a twin-turbocharged V6 motor that produces around 400 hp. Furthermore, a plug-in hybrid powertrain is also expected to join the Ranger line-up at some point.

As before, the new Ranger will also form the basis for the next-gen Endeavour (Everest) which will share its platform, interior and exterior bits along with engine options.

As we reported in December last year, Ford was planning to introduce the now outgoing Ranger Raptor in India in the second half of this year. The carmaker intended to import the pick-up as a CBU under the 2,500-unit homologation-free route. However, as Ford has wound down operations in the country, it seems unlikely that this model will now be brought down here.