New sub-four-metre MPV will be based on Renault’s low-cost CMF-A platform; will offer seating for seven. 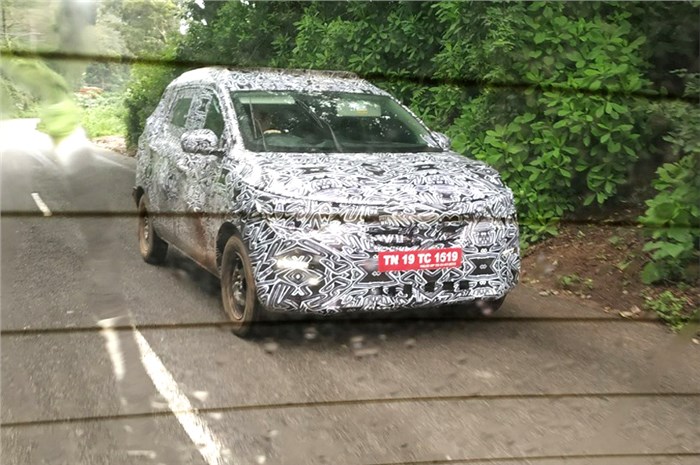 French carmaker Renault has started testing its new MPV (codename: RBC) for India. The first set of spy pics have surfaced online and they are said to have been clicked in Tamil Nadu. As we had reported earlier, Renault has been working on a new MPV despite the Lodgy not doing well in our market. Set to launch in 2019, the new MPV will sit under the Lodgy in Renault’s line-up and will come in at a lower price point.

Underpinning the new model will be Renault’s CMF-A+ platform –  a development of the CMF-A on which the Kwid hatchback is based. It will be larger than the Kwid and will have a longer wheelbase too, but overall length will still be under four metres to qualify for the excise benefits on ‘small cars’. Notably, the Renault MPV will come with a third row of seats making it suitable for up to seven passengers.

The MPV on test has been clicked with full camouflage but the images suggest an angular design. Earlier this year, Laurens Van Der Acker, corporate design director at Renault, spoke to Autocar India about ‘balancing style and rear headroom’. Company insiders have also stated off the record that the MPV will be designed as a new model and not be a modified version of the Kwid. Sister brand Datsun’s seven-seater Go+ that’s based on the Go hatchback never took off, and Renault would not want to go down that route. Basic shape aside, the larger rims and chunkier tyres will also help distance the new MPV from the Kwid hatchback.

On the inside, the new MPV is likely to share some components such as the air-con vents and touchscreen infotainment system with the Kwid, but the design of the dashboard is expected to be new. There will also be more equipment on offer, including a rear wash/wipe arrangement and LED DRLs that are seen in the spy pics. Dual airbags, ABS and rear parking sensors will also be standard in compliance with latest safety norms that come into effect in October 2019.

Powering the new MPV will be an updated version of the Kwid’s BR10 1.0-litre that could be upgraded with a turbocharger to deal with the additional load requirements. Worth mentioning is that there won't be a diesel engine on offer as Renault does not have a unit small enough to fit in the MPV’s engine bay.

We hear the manufacturer is looking to price the MPV in line with mid-sized hatchbacks. Seven seats for reasonable money is a good formula but it remains to be seen how Indian buyers will take to the new model. Renault needs a big hit after the Kwid, and the new MPV and the other entry-level models it has in the pipeline could just do the trick.