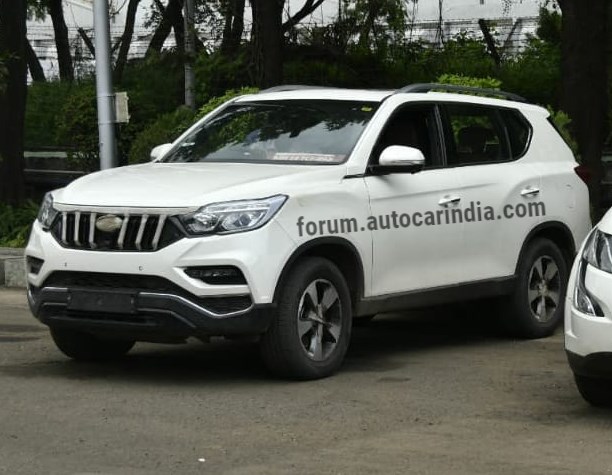 Mahindra Y400 SUV is based on the second-gen SsangYong Rexton; will take on the Fortuner, Endeavour and the MU-X.

Mahindra is all set to launch its new flagship SUV in the Indian market. The new SUV is yet to get officially named and is currently known by its model code, Y400. According to our sources, the Mahindra Y400 SUV will see a market launch on October 9, 2018. The new Mahindra Y400 SUV will sit above the XUV500 in the company's India line-up and will replace the first-gen SsangYong Rexton.

The Mahindra Y400 SUV made its public debut in India at the Auto Expo 2018 earlier this year and was recently showcased to the public in Mumbai at a company event.

Based on the second-gen SsangYong Rexton, the Mahindra Y400 SUV gets a unique grille design which is more in-line with other Mahindra models. Additionally, for India the Mahindra Y400 SUV will feature a tweaked suspension set-up to better suit our roads, which will result in a change in ride height and changes to its handling characteristics.

Compared to the outgoing model, the new Y400 SUV gets an updated feature list. While the model shown at the Auto Expo was equipped with projector headlamps, a 9.2-inch HD touchscreen with Android Auto and Apple CarPlay, a 360-degree camera, a 7.0-inch LCD instrument cluster, cooled seats, Nappa leather upholstery and a smart tailgate, recent sightings of close-to-production mules have confirmed that most of the equipment above is likely to make it in the India-spec SUV.

Under the bonnet, there is a 2.2-litre, four-cylinder, turbo-diesel engine that produces 187hp and 420Nm of peak torque. Power is sent to the rear wheels via a seven-speed torque converter automatic transmission, though all-wheel-drive will be on offer with higher-spec variants.

Estimated prices for the new Mahindra Rexton are expected to begin at Rs 24 lakh (thanks to a significant degree of localisation), which will see it undercut its rivals in this segment - the Toyota Fortuner, the Isuzu MU-X and the Ford Endeavour.