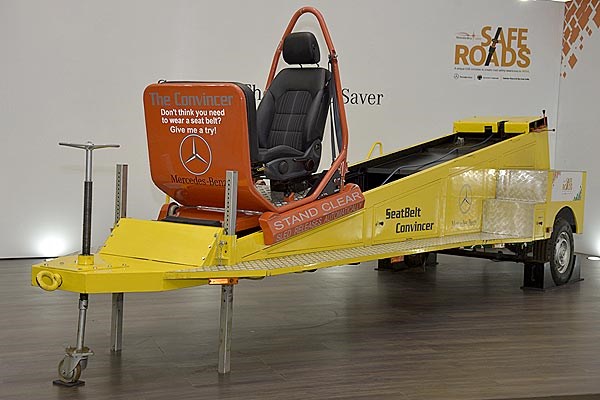 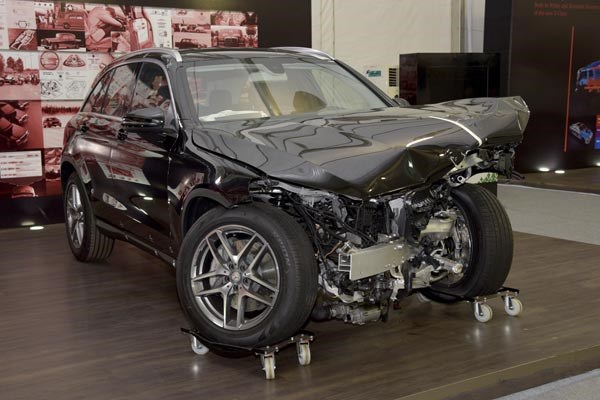 A crashed Mercedes-Benz GLC is one of the new exhibits for this year in the ‘Safe Roads’ initiative.

Mercedes-Benz is working towards enhancing the safety quotient in its cars by means of virtual human body models, a step up over the traditional crash test dummies. The research on this topic is being spearheaded by the engineers at Mercedes-Benz Research and Development India (MBRDI), Bengaluru, the carmaker’s only research facility conducting Human Body Modelling (HBM) simulation.

“When it comes to safety, the biggest mandate that the Indian office carries right now is to further develop, maintain and make safety decisions based on advanced human body modelling that comes out of the Bengaluru centre for Mercedes worldwide. This is the only Mercedes centre across the globe working in this area,” Manu Saale, MD & CEO, Mercedes-Benz Research and Development India told Autocar India in an interview.

Road accidents, related injuries and fatalities are on the rise at an alarming rate across the world. According to some estimates, nearly 1.3 million people die in road crashes globally each year; an average of 3,287 deaths a day.

Testing with HBM takes into account a wide range of parameters, like the complex physical properties of the human body-like muscle contractions under various crash situations.

Mathematical models or computer-generated models of the human body, along with similar models of vehicle structure and the various safety systems in the vehicle can offer a very economical, flexible and speedy technique in a crash examination.

“The system doesn’t just predict how the crash test dummy rotates around the seat, but really goes down to the level of predicting tissue damage and upper body damage and so on, and recommending the design changes and positioning of additional structural improvements to make the vehicle safer. This is the biggest advancement,” he said.

There is likelihood that simulated tests could become common in the future. But will it ever replace real crash tests? “There’s a lot of computer simulation-based advancements we are looking for, and once we have that, you could technically crash a car digitally and accept the results.” stated Saale.

With over 3,000 engineers, MBRDI is the largest Daimler research and development centre outside Germany, and it also is the largest centre run by any German car manufacturer in India. Mercedes-Benz India recently opened another R&D facility in Bengaluru.

New exhibits this year include an actually crashed GLC SUV for visitors to witness. The exhibit demonstrates the passenger compartment of the GLC which remained stable in the frontal offset barrier test. Other exhibits consist of Belt-Slide which enables visitors to experience the impact of seatbelts in a simulated crash environment at low speeds. The company believes over 70 percent of the fatalities can be reduced in the next ten years through education and enforcement of safety rules and by creating awareness.