Mahindra is now using 8 of its plants across the country to assemble face shields, while some plants are also developing a low-cost ventilator and manufacturing hand sanitisers. 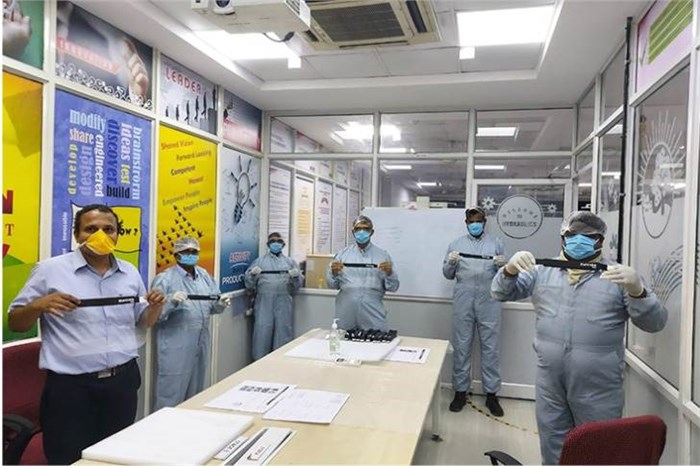 Mahindra & Mahindra, which has since early March engaged itself in a number of activities to combat the outbreak of coronavirus in the country, is fast expanding its operations designed to assist medical personnel, the police force and social welfare organisations. These activities include the assembly of face shields, development of a low-cost ventilator and also manufacturing hand sanitisers.

The latest news is that Mahindra's Nagpur plant in Maharashtra has started assembling face shields, thereby becoming the eighth plant to produce this coronavirus-fighting tool.

On April 12, the company's Zaheerabad plant in Telangana, which usually rolls out three-wheelers like the Alfa passenger and load carriers, Jeeto, Bolero Camper and Load King trucks, had begun assembly of the same face shields and distribution to the local police, among others. In a tweet, Vijay Kalra, chief of manufacturing operation, automotive sector, M&M, said: "With this, ZBD becomes seventh Mahindra site to assemble face shields and distribute to corona warriors. Three more sites in pipeline."

On April 9, the company's two-wheeler manufacturing plant at Pithampur, Madhya Pradesh, which rolls out the Jawa brand of motorcycles, began assembling face shields. A day later, on April 10, the Haridwar, Uttarakhand, plant expanded the same operation, and joined the Kandivali (Mumbai) and Nashik plants in Maharashtra producing the same life-saving tool.

It may be recollected that on March 30, M&M began assembling of the face shield, developed from a design sourced from Ford Motor Corporation, at its Kandivali plant in Mumbai, Maharashtra. The face shields fully block the face and eyes from accidental contact with liquids. The ongoing Mahindra and Ford collaborative effort is a good example of a set of automotive industry alliance partners contributing to the fight against coronavirus.

Meanwhile, Mahindra's agri chemicals plant has commenced manufacture of a hand sanitiser, which, according to SP Shukla, group president - aerospace, defence, agri and steel sectors, member of group executive board, chairman - group sustainability council and Mahindra innovation academy, was developed " in record time from formulation to license to testing."  The hand sanitiser has received a licence on compliance from the central and Gujarat state authorities.

In another development, M&M which has been working on developing a low-cost ventilator since early March has named the unit 'AIR100'. Last month, Dr Pawan Goenka, managing director, Mahindra & Mahindra, had invited suggestions for a name.

In a tweet on April 12, Dr Goenka said: "Received more than 400 suggestions. Combining multiple suggestions, the team has opted to call this AMBU bag respirator AIR100. Thank you for helping us with naming this device. After 18 days of 24X7 work, our team is almost there. Inputs taken from 10 doctors and few biomedical engineers. Many features and controls added from the first design. 20 machines under endurance testing in our plant."