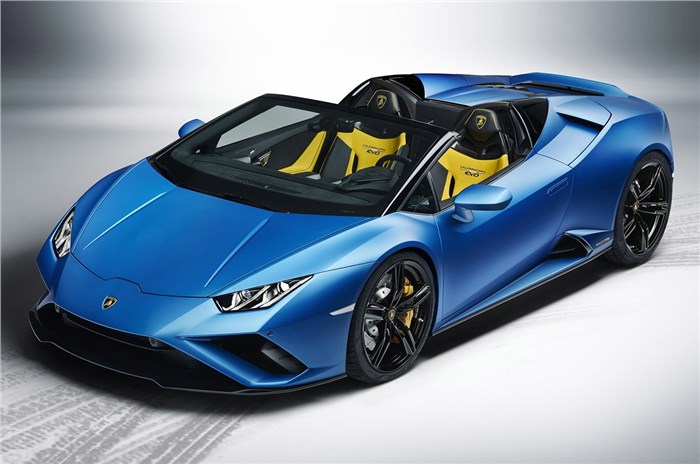 The Lamborghini Huracan Evo line-up in India is set to expand, with the launch of the drop-top RWD Spyder variant on June 8, 2021. Revealed in international markets last year, the Huracan Evo RWD Spyder shares much of its cosmetic details with the RWD Coupe and is powered by the same engine.

Starting with the styling, the RWD Spyder gets similar tweaks to the RWD Coupe, which is already on sale, to set it apart from its AWD sibling. These differences include a new front splitter, bespoke rear diffuser and a new rear bumper. The RWD Spyder though carries over the AWD model’s prominent twin buttress design – a styling element aimed at improving aerodynamic efficiency and downforce.

Compared to the RWD Coupe, the Spyder is about 120kg heavier (dry weight) owing to structural enhancements and the mechanism for the folding soft top roof. The roof itself can be folded at the touch of a button, and it can be lowered in 17sec at speeds of up to 50kph. The car also gets a rear windscreen that can be raised and lowered independently of the roof, to let the sound of the V10 engine into the cabin.

The cabin is identical to that of the RWD Coupe.

Coming to the engine, the RWD Spyder uses the same 5.2-litre, naturally-aspirated V10 petrol unit as the rest of the Huracan range. The unit develops 610hp and 560Nm of torque – down 30hp and 40Nm over its AWD sibling – and is paired with a 7-speed dual-clutch automatic gearbox.

While power and torque figures are identical to the RWD Coupe, the Spyder is marginally slower. At a claimed 3.5sec 0-100kph time, it is 0.2sec slower than the RWD Coupe; also, its top speed is a claimed 324kph as against 325kph for the Coupe.

Lamborghini says that it has also specially tuned the car’s Performance Traction Control System for consistent torque delivery and traction, even under hard cornering. The carmaker claims that dynamic performance will be identical to that of the RWD Coupe.

Coming to the pricing, expect it to start at a premium over the Huracan Evo RWD Coupe, which was launched at Rs 3.22 crore (ex-showroom) last year.