The Roadster concept has been built for the Gran Turismo video game. 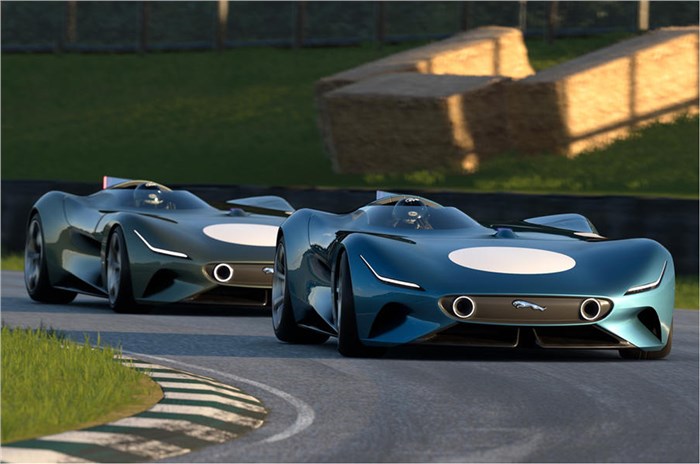 Jaguar Vision Gran Turismo: what is it?

An open-top version of the original Vision Gran Turismo, unveiled back in 2019, the new addition in this concept features a single seat for the driver – similar to the real-world Ferrari SP1 Monza – with a dorsal fin reminiscent of the 1950s Jagaur D-Type Le Mans racer. It has an LED-illuminated Union Jack laser-etched into the side, with the fin itself being an active-aerodynamic feature, deploying at high speeds to increase stability.

The cabin is surrounded by a sleek wraparound windscreen, with a small lump that could possibly contain a rear-view mirror visible in the centre of the car. A pair of leather straps hold down the bonnet.

At the front, a redesigned grille plays host to a pair of LED fog lights that again pay tribute to the D-Type. A new front splitter can also be seen, with a two-piece construction replacing the singular lip seen on the previous concept car.

Aside from the open-top layout and the restyled front end, the Roadster is otherwise identical to the 2019 concept. It shares the hypercar’s three-motor, 1,004hp all-electric drivetrain, with a lithium-ion battery pack providing up to 1,194Nm of torque. This allows for a 0-100kph sprint “under 2.0sec” and a top speed “in excess of 320kph”. The concept weighs in at just 1,400kg, with a “near 50:50” weight distribution.

The car is available now to players of Gran Turismo 7, along with the two previous concepts. Although it won’t lead to a production car, it displays themes that could make it into Jaguars of the future. A large proportion of Gran Turismo’s 83 million players are in the 25-to-35-year-old bracket – a demographic that the brand previously told us it considered vital to its future.

Jaguar's last Vision Gran Turismo car – 2020’s 1,900hp Vision Gran Turismo SV, a racing version – was developed by workers from departments across the brand, including Jaguar Racing, the firm’s motorsports arm. A full-size model of the car was produced and exhibited at several motor shows.

2022 marks the sixth year of the Vision Gran Turismo project. Dreamt up by Polyphony Digital, the team behind the hugely popular racing game series, the programme invites major manufacturers to create advanced fictional cars to be added to the games.

VW Polo could return as an import in GTI form