The new Ford Freestyle is powered by a 96hp, 1.2-litre petrol and a 100hp, 1.5-litre diesel; will share interior bits and kit with upcoming Figo and Aspire facelifts. 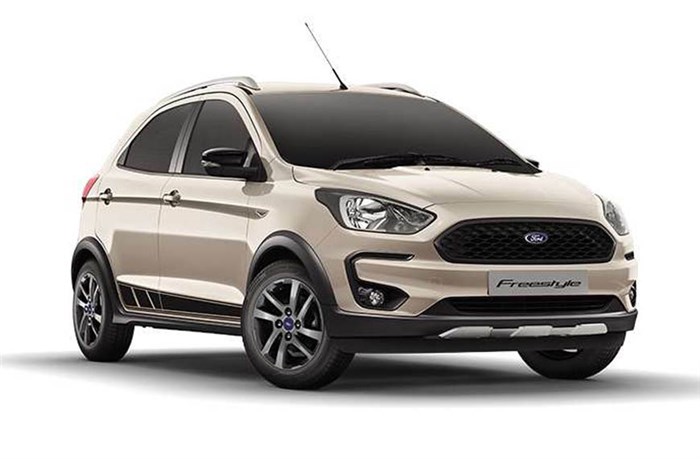 We have recently driven the new Ford Freestyle and while it is not yet on sale, here’s everything you’d want to know about the new Ford Figo-based cross-hatch and its variants.

Along with the extra 15mm ground clearance, the Freestyle also sports a different steering and suspension set-up, when compared to the Figo hatchback. The former is now lighter to aid low-speed driving, while the latter has been tuned for a more comfortable ride.

The highlight of the Freestyle is under the hood. Ford’s new three-cylinder, naturally-aspirated Dragon series of petrol engines made its debut on the new EcoSport. The compact SUV is powered by a 123hp, 1.5-litre version, while the new Freestyle will have a 1.2-litre petrol mill. This engine makes 96hp at 6,500rpm and 120Nm at 4,250rpm and has a claimed fuel efficiency figure of 19kpl. The carmaker’s 1.5-litre diesel engine that produces 100hp at 3,750rpm and 215Nm at 1,750-3,000rpm is also available. A five-speed manual is standard on both motors, though the petrol will get an automatic option, at a later date. Interestingly the petrol model comes with a 42-litre fuel tank while the diesel model – which has an ARAI-rated fuel efficiency of 24.4kpl – has a 40-litre one.

The car is available in four trim levels on each engine option – Ambiente, Trend, Titanium and Titanium+. Even the base variant gets a safety kit like ABS with EBD, dual-front airbags, three-point rear seat belts, reverse parking sensors and rear fog lamps.

In terms of features, the base Ambiente variant gets folding rear seats, power windows in the front (with a driver’s side auto-down function), a 12V socket, keyless entry, a day/night rear-view mirror and adjustable front seat headrests. The mid-spec Trend also gets features like all four power windows, a 6.5-inch touchscreen infotainment system with USB and Bluetooth connectivity, navigation and steering-mounted audio controls. The mid-spec trim also gets a tachometer with a gear shift indicator and a boot light.

The Titanium and Titanium+ trim get follow-me-home headlamps, rear washer and wiper, automatic climate control, auto up and down functions for the driver’s side power windows, a height adjustable driver’s seat and front seat belts, push-start button and electrically adjustable and folding outside rear view mirrors. However, the top-spec variant also adds an automatic day or night inside rear view mirror, automatic headlamps and wipers, an additional USB port for the infotainment system that comes with Ford’s Sync3 (with voice control) and Android Auto and Apple CarPlay compatibility.

A launch date will be announced soon, though we expect prices to range in the Rs 6-8 lakh bracket (ex-showroom, Delhi). This would see it pegged slightly higher than Toyota’s Etios Cross.