1.2-litre, three-cylinder diesel to be BS6-compliant for next-gen Grand i10 and Xcent. Will be the smallest diesel car in the Indian market. 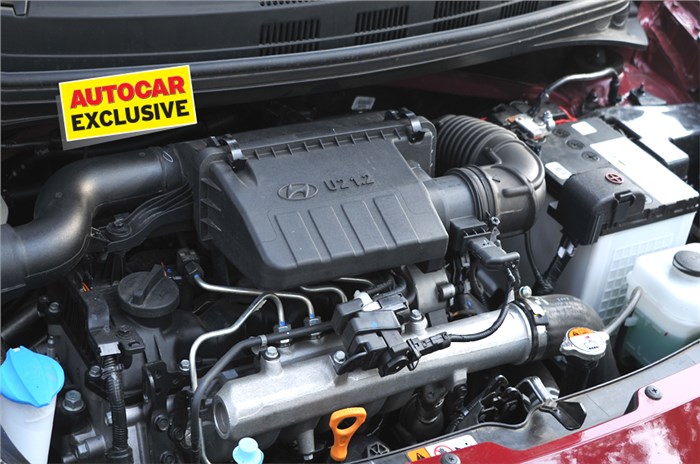 Compact diesel cars will be the biggest casualty in the move to the new BS6 regulations which come into effect on April 1,2020. The high cost of upgrading diesel engines to meet the stricter emission standards will lead to steep price hikes, making diesel cars significantly more expensive than their petrol equivalents; and the smaller the diesel, the greater the cost impact.

With the cost of conversion to BS6 (without a Selective Catalytic Reduction (SCR) system) being roughly the same for big and small diesel engines, the price gap between a diesel and petrol car gets wider as you go down the price ladder. Hence, the BS6 price escalation will hit the budget-end of the diesel car market hardest, leaving little incentive for buyers to opt for a small diesel car. The steadily narrowing price gap between petrol and diesel fuels and the negative sentiment still surrounding diesel cars is pushing diesel car sales down even further.

As a result, several manufacturers are pulling the plug on their entry-level diesel models as their engines won’t make it to BS6. Tata Motors has announced that it will axe its 1.05-litre three-cylinder diesel engine that powers the Tiago and Tigor whilst the Mahindra 1.2 turbo-diesel triple under the hood of the KUV100 will also go away, with no replacement planned. But it’s the demise of the Fiat 1.3-litre multi-jet engine – which powers a wide range of Maruti Suzuki models – that will leave the biggest hole in the diesel car market; and it’s this soon-to-be-vacated space that Hyundai is eyeing.

Unlike its rivals, Hyundai has confirmed that it will upgrade its 1.2 three-cylinder diesel (part of the U2 engine family), which currently powers the Grand i10 and Xcent, to BS6 standards. Hyundai India managed to work around the cost issues thanks to its parent company, which had already invested in upgrading its diesel engines to Euro 6 (similar to BS6) for the European market. “We are fortunate that a lot of the development work and costs to upgrade the U2 diesel engine family to BS6 have been taken care of,” said a Hyundai source.

Hyundai sees the move to BS6 as a big opportunity, especially since around 15 diesel cars will be pulled out of the market. “With Maruti and others discontinuing diesel cars, we have an opportunity to fill the gap in the market of around 3,00,000 cars per year.” Hyundai is in particular keen on swooping into the space that will be left behind once the Maruti Suzuki Dzire goes. The diesel version of Maruti Suzuki’s popular sedan sells around 1.2 lakh units a year and the Korean automaker hopes to substitute these volumes with the Xcent, which is on course to be refreshed next year.

Similarly, with the discontinuation of the diesel variants of the Swift and Ignis, Hyundai will have the budget diesel car market all to itself and hopes to dominate it with the next-generation Grand i10 (code: AI3). Both the Grand i10 and next-gen Xcent will be powered by the same 1.2-litre BS6 diesel motor and the cost increase, according to a company source, “will be around Rs 30,000 – 40,000.” This figure is significantly lower than Maruti Suzuki’s estimate of a Rs 2,00,000 cost escalation going from BS4 to BS6 which indicates the huge cost advantage Hyundai has with the new BS6 regime.

Though diesel car sales are rapidly declining, they still form a substantial chunk of the market and Hyundai hopes to be the last man standing in the compact diesel car market. The 1.2-litre U2 is the only (and possibly the last) three-cylinder diesel engine remaining in India.

Also, as exclusively reported by us, Hyundai will introduce a new 1.5-litre diesel engine in the Indian market prior to the BS6 deadline. This motor will be available in two states of tune and is expected to make its debut in the Verna facelift.