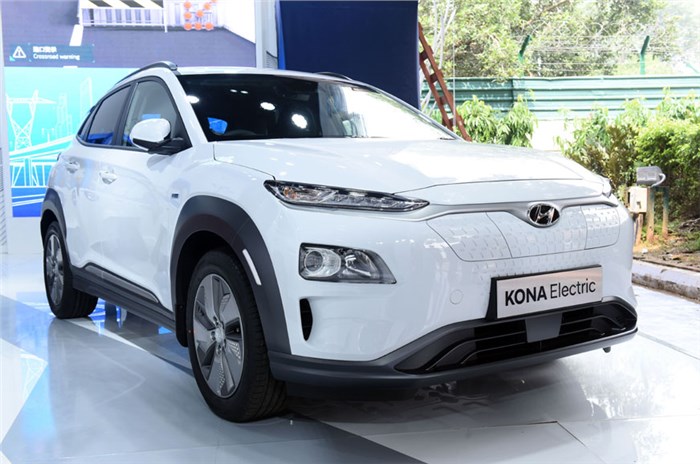 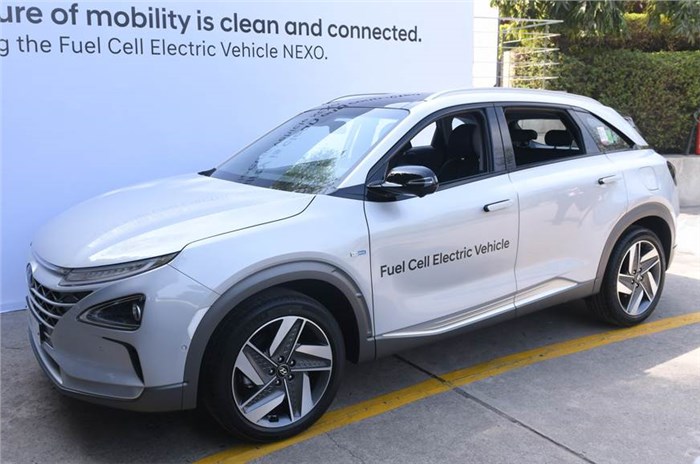 Hyundai India showcased the Kona Electric Vehicle at the Global Mobility Summit 2018 in New Delhi.The Hyundai Kona EV, as confirmed by us earlier in March, will be launched in the Indian market in mid-2019.

The Kona EV's lithium-ion battery pack can be charged in as little as 54min to 80 percent capacity from a 100kW fast charger, or in 6hr 10min from a standard AC source.

Hyundai claims that the car’s battery pack is integrated into the Kona’s platform without encroaching upon interior space, meaning the regular Kona’s luggage space is unchanged. Without the charging cable, the Kona EV provides 373 litres, falling to 332 with the cable stowed. There’s additional storage space in the front of the car.

On the outside, its styling is similar to the regular Kona, but has a closed grille and no exhausts, while the 17-inch alloys are exclusive to the electric Kona. The bumpers and spoiler are tweaked for aerodynamics. Inside, there’s a digital dashboard, head-up display and 7.0-inch infotainment touchscreen, with the option of an upgraded 8.0-inch unit. The front seats are heated and ventilated, and gets an eight-way electric adjust.

Apart from the Kona EV, Hyundai's first fuel-cell vehicle, the Nexo is also headed to India. While Hyundai India has made this announcement it has not mentioned details of when it is expected to arrive. The Korean brand hadpreviously showcased the Nexon FCV earlier this year in Delhiand Hyundai’s plans to officially launch the model are in line with its electrification plans for the country.

The Nexo has a 95kW fuel cell, which powers an electric motor that produces 161hp and 395Nm of peak torque. The SUV has a drive range of 609km on a single charge (under Korean certification), 0-100kph is dealt with in a claimed 9.2sec and top speed is claimed to be 177kph. In international markets, the Nexo currently serves as the technological flagship for the carmaker and it could adopt this position in India when it arrives as well.

The SUV is also equipped with a suite of autonomous driving functions and includes a next-generation blind spot monitor. It also gets other driver assists such as Lane Following Assist (LFA) and Highway Driving Assist (HDA); the former can steer, accelerate and brake the car at speeds, while the latter uses map data and builds on LFA to control the car according to the speed limit, as well as use sensors to detect environmental conditions. The Nexo is also fitted with a remote parking system, enabling the car to self-park.

In terms of styling, Hyundai’s typical design cues can be seen on the Nexo, though the headlamps are slimmer and the ‘cascading grille’ is a bit sharper compared to models currently on sale in India. The cabin of the fuel-cell vehicle features two LCD screens that combine to make a 12.3-inch display.

Apart from the above two zero-emission vehicle launches, the company also has announced plans regarding shared and connected mobility and aims to develop a 'Connected car program' to help promote the objective.

In the near future, Hyundai isgearing up to launch the new Santro (with a suffix)and intends to bring theCarlino-based compact SUVto our market soon.