Hyundai i20 N will come with a 204hp engine and two gearbox options, will be unveiled later this year. 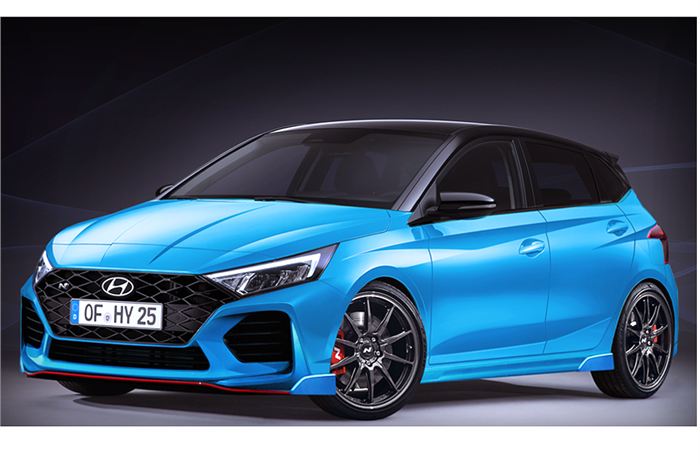 Hyundai is in the final stages of testing its first-ever performance-oriented i20 N, with a world debut expected sometime this year. The i20 N will come with a 204hp, 1.6-litre turbo-petrol engine, making it the most-powerful  i20 to roll out from the factory. This engine is already available in a bunch of other Hyundai models like the Veloster, and is mated to a 7-speed DCT gearbox that is bundled with a Manual mode and a Sport mode. There are talks of a 6-speed manual on the i20 N as well. The i20 N's torque figure is expected to be around 260Nm.

The company had released a teaser of the most powerful i20 a few months ago. What we understand from the sneak peek is that while the bodyshell will be quite similar to the standard five-door i20 revealed a few months ago, the i20 N will get performance-related design and styling tweaks. Changes include a restyled front fascia with an updated grille and bumper that will not only help distinguish it from the standard car, but will also have functional intakes for better engine cooling. The model will come with bigger alloy wheels and wider tyres as well as a tauter suspension tuning. It will also get uprated brakes and tweaks to the steering ratio to improve performance. Side skirts and a new rear bumper,  a double barrel exhaust on the right side, and a factory-fitted spoiler will be part of the i20 N's design.
Expect Hyundai to take the covers off the i20 N in the coming months. In India, the all-new i20 hatchback will see a market launch around August and it will rival the Tata Altroz, the soon-to be launched BS6 Honda Jazz, the Maruti Suzuki Baleno, and the Toyota Glanza twins.