How to identify and avoid buying a flood damaged car

Flood damaged cars can come with a host of problems that could prove problematic later in the vehicle’s life. We tell you how you could identify a flood damaged car. 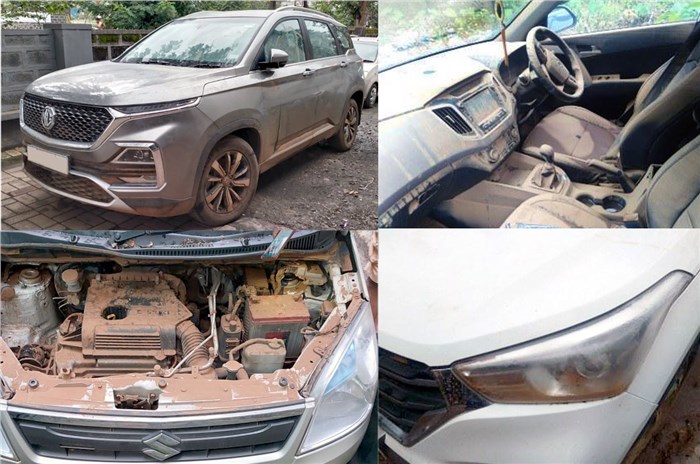 Given how unpredictable and heavy Indian monsoon can be there is a very high chance that some places can experience flooding. There have been quite a few flood instances in our country in the last few months, including the devastating ones in Mahad and Chiplun in Maharashtra, that caused huge damage to property and vehicles. A large number of flood damaged cars are now being refurbished and sent for resale all across the country. Now, when it comes to buying a car, buying one that has sat in flooded streets is one thing you absolutely don’t want.

Flood damaged cars can come with a variety of issues over their lifetime some which may crop up immediately and may have already been addressed and more that may rear their heads later in the car’s life. This is because some flood damaged cars are all but impossible to re-build properly. There are a number of electrical systems and wiring that goes into most cars and water can damage nearly all of it. Even water filling into the engine or gearbox can lead to issues which may not initially be visible but can worsen over time.

So, how do you spot a car that may have been affected by flooding? These points can help.

Yes, cars over their life cycle do start suffering from signs of corrosion with the pace depending on the location – exposure to salty sea-side air fastens corrosion. Check for signs of corrosion in places where there should be none. Look at panel gaps near the bonnet and gaps between panels that are high up on the body. Also look for signs of corrosion on unpainted metal components such as under dash brackets, under the body and bonnet joints. Signs of excessive rusting could mean that the car has been sat in flood waters for extended periods.

A rusty tool set is also another giveaway and is something that can easily be overlooked by someone trying to disguise a flood damage. 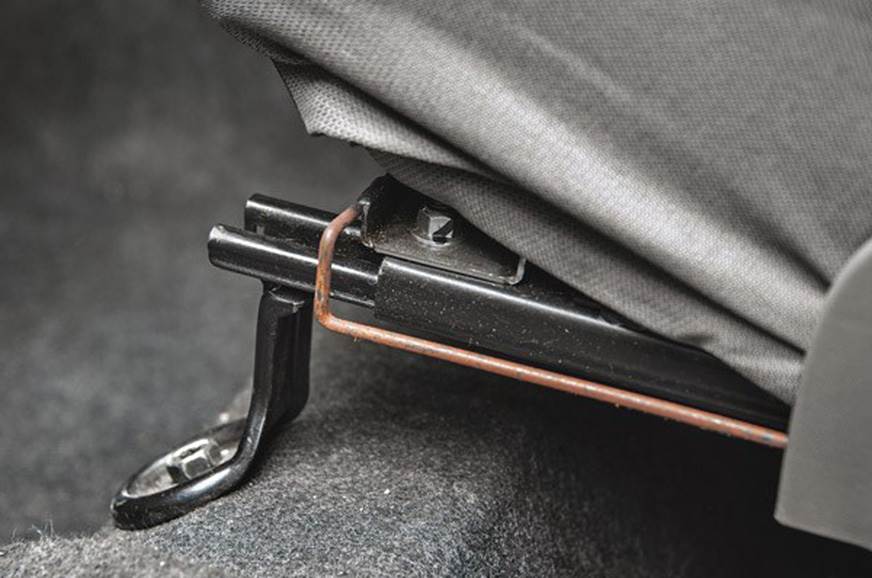 Corrosion on the seat rails could indicate that the car was waterlogged.

Check for corrosion on the inside as well in places such as various exposed screws like those used to anchor the front seat rails. Improperly fitted screws should also raise flags it could be a sign that the seats have been removed and put back to help dry out the carpet properly.

Inspect the head and tail-lights carefully for a faint water line on either the outside lens or the reflector on the inside. Though one should keep in mind that these parts could have easily been replaced before the car was put on sale. 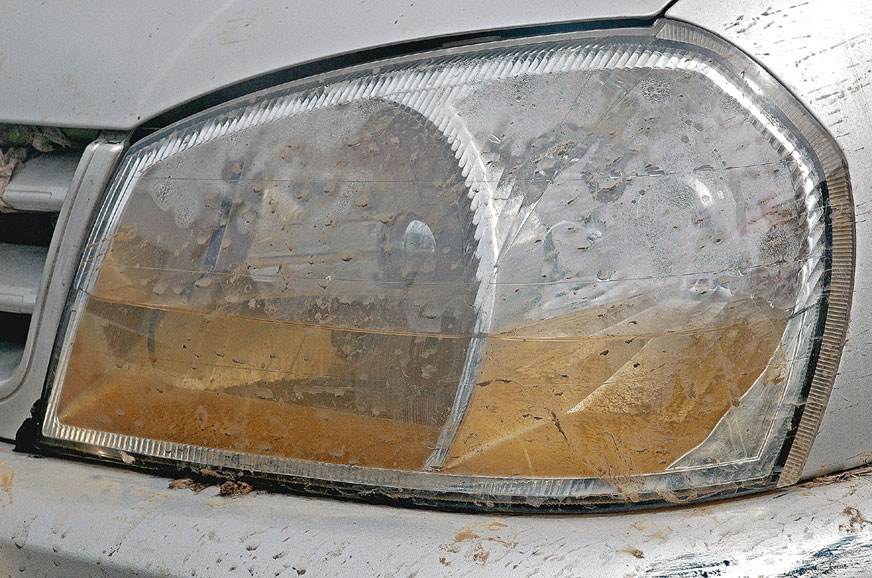 Next up, look closely at difficult-to-wipe parts under the hood and in the boot. Water-borne mud and dirt trails may still be visible around the engine bay or under the boot floor in the housing for the spare wheel.

Check for water-borne silt behind the dash and inside the glovebox. This is more common than you expect in flooded cars. Also look for signs of upholstery discolouration or staining – a variation in colour of the upper and lower seat upholstery could indicate that the car had been partially submerged.

Smell for musty or foul odour

While the car’s interior may have been dried a musty or foul odour could still be stuck to the cabin. If you find the interior smelling damp, musty or have an unpleasant odour you might want to reconsider. On the flip side a strong-smelling air-freshner could also be used in order to disguise the smell so be careful. Also run the air-condition to see if you get a musty odour from the compressor or blower. 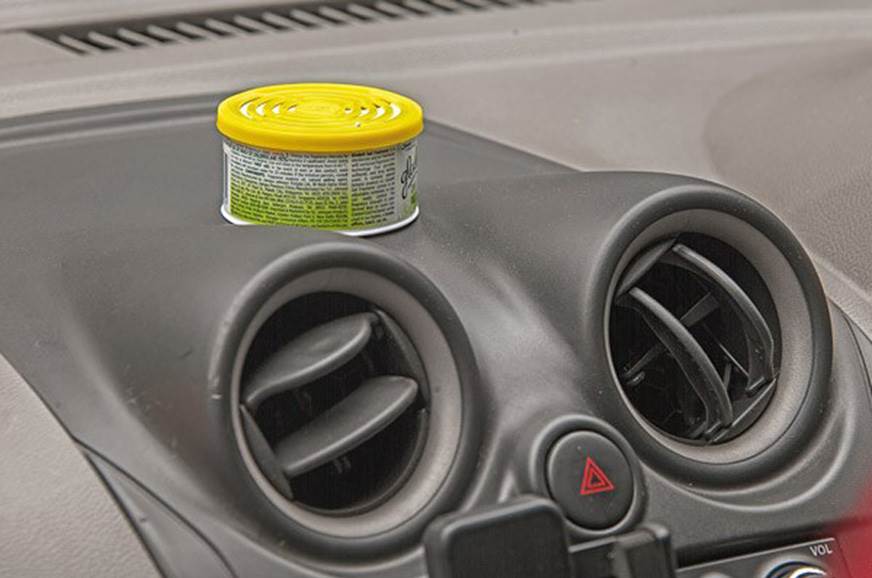 Check for musty odour from the air-con; strong air freshner could be used to hide smell.

Do a round of all the electricals in the car. From the cabin lights, to the infotainment system, to the headlamps and tail-lamps and even the visible wiring harnesses. Looks for signs like all the warning lights not coming on in the dashboard when you turn on the ignition or some lights not working at all which could hint at electrical damage. Also, the wire casings tend to dry out from prolonged exposure to salt water in sea-side areas so if the casings crack the car could have been waterlogged.

Other checks one can perform, include pulling the seatbelts and letting them retract. If the seatbelt does not retract smoothly, it could be a sign of corrosion inside. Also check functions such as the handbrake and steering work smoothly as any hitches in these systems could hint at corrosion or dirt and silt being left behind. A hard to modulate clutch could be a sign of flooding although this could also be owing to driving style.

Good to have a trusted mechanic inspect

While you may be able to spot some of these tell-tale giveaways, it is always nice to have a trusted car mechanic or garage where you can have the car given a complete once over – even raised on jacks to properly inspect the underbody – to get a proper opinion. Having the car inspected professionally at an official service centre will also help you identify any sub-par works to repair flood damage.

Getting stuck with a flood damaged car is the last thing one will want. While everything may seem well initially, as we mentioned above, there can be a lot of hidden costs involved later in the vehicle’s life. So, if you feel that the car shows signs of having been flooded it is best to walk away. Else, get it looked at professionally before you decide to seriously put your money down.