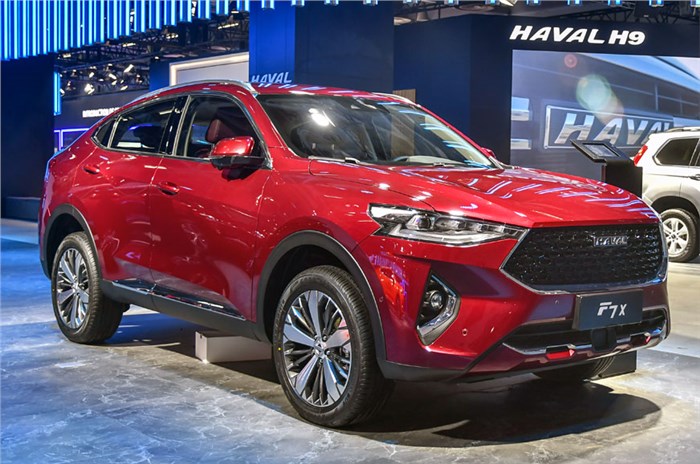 China’s Great Wall Motor Company has come out all guns blazing at Auto Expo 2020. In addition to showcasing a number of Haval’s traditional SUVs, Great Wall has also put its stylish SUV-coupé, the Haval F7x, on display.

The Haval F7x is based on the brand's standard F7 SUV (which is designed to be a rival to the Hyundai Tucson facelift, also introduced at Auto Expo 2020). So in terms of size, the F7x is the same as the standard SUV but its height is lower by 35mm. Up front, it looks exactly like the F7, but things change when you view the F7x from the side. With its sharply raked roofline, the F7x SUV-coupé has more than a hint of the BMW X4's silhouette, and frankly, that is the look Great Wall Motor would’ve been aiming for.

Just like the F7, the Haval F7x's interior features a 9.0-inch screen for the infotainment system which is angled towards the driver and also features Apple CarPlay and Android Auto. Another highlight inside the spacious F7 is a panoramic sunroof. Safety features on the Haval F7x include front, side and curtain airbags, ESP, rollover mitigation and a forward collision alert system.

A 2.0-litre T-GDI turbo-petrol engine powers the F7x. It makes 190hp and 340Nm of torque, and is paired to a 7-speed dual-clutch automatic gearbox. Along with the front-wheel-drive model (which does 0-100kph in a claimed 9sec), there’s also an all-wheel drive on offer abroad.

While it hasn't mentioned any models in particular, Great Wall Motor has confirmed it will launch the Haval brand in India in 2021, having announced its takeover of General Motors' plant in Talegaon for its India operations.

Think the Haval F7x SUV-coupé could make a case for itself in India if it’s priced right? Let us know in the comments.

Haval F5 could be a right-sized SUV for India