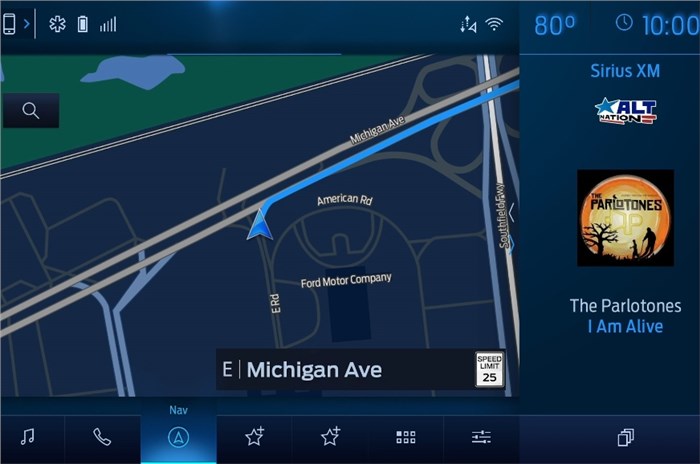 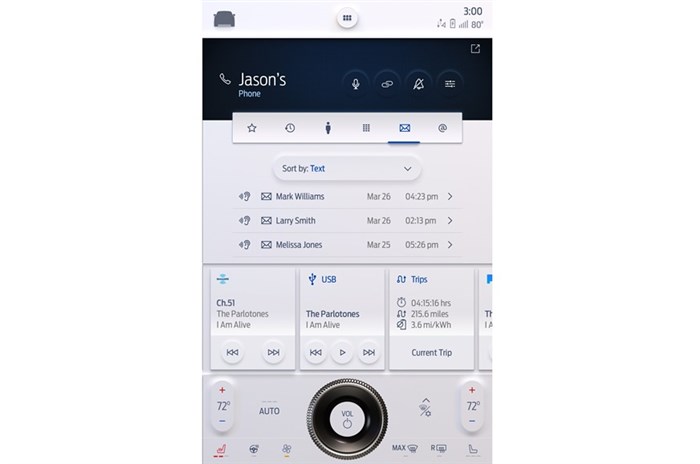 American car major Ford has previewed the next generation of its infotainment system, dubbed the Sync 4, that is touted to greatly enhance the in-car communications and entertainment experience. Building on the strengths of the previous Sync 3 system, the company’s latest offering features a heavily redesigned user-interface (UI), cloud connectivity and machine learning capabilities as well seamless wireless phone connectivity.

Ford has revealed that its upcoming vehicle line-up will be equipped with touchscreen displays, ranging from 8-inches to a whopping 15.5-inches in size, that will run the Sync 4 system featuring different looks and capabilities depending on the vehicle and screen size. The company claims to have designed the system to enhance multi-tasking capabilities without the need for swapping through multiple screens. So, while a 12-inch display will sport a split-screen layout allowing the front seat occupants to use multiple apps simultaneously, the large 15.5-inch display will have recently used and popular features shown at the bottom of the screen as interactive widgets or ‘adaptive dash cards’.

For those people who despise using cables, Ford is offering a completely cordless experience with wireless implementation for both Apple CarPlay as well as Android Auto. And to ensure that plugging your phone into the car becomes a thing of the past, the auto manufacturer will also bundle its vehicles with wireless phone charging capabilities.

Constant on-the-move connectivity is another highlight of the new technology. Ford says that cloud connectivity will be standard on the Sync 4 which will not only result in sat-nav maps being updated with the latest traffic information, but will also make possible voice recognition that can be operated via natural speech commands. Consequently, conversational requests like “find me the best restaurant” will be compatible with the system, so will SMS and email communication via speech recognition. The company adds that while cloud connectivity will be at the forefront, the system will have enough on-board processing power to not suffer from performance issues in areas of low network signals.

Ford has revealed that the Sync 4 system will be available on select Ford vehicles starting from 2020. However, this announcement pertains to the global market and it remains to be seen if this new piece of tech makes it to our shores, where the American auto major has entered into a joint venture (JV) with home-grown carmaker, Mahindra. The slew of products planned for our market under the JV are expected to be built on common platforms and powertrains, however each company is touted to have a unique top hat, cabin design and driving dynamics for its own offerings to ensure sufficient differentiation between their products.

Ford’s current crop of vehicles in India, including the Freestyle crossover, Aspire sedan and EcoSport and Endeavour SUVs come equipped with the previous-gen Sync 3 infotainment system that covers the basics well by offering Apple CarPlay and Android Auto. If the new Sync 4 system is brought to India, it will give the company an even footing vis-à-vis players like Hyundai, Kia and MG which boast of their own smart connectivity solutions already having been launched in our market earlier this year.