As per the terms of the JV, Mahindra will co-develop 7 new models with Ford for the Indian market; 3 new UVs to emerge from this tie-up. 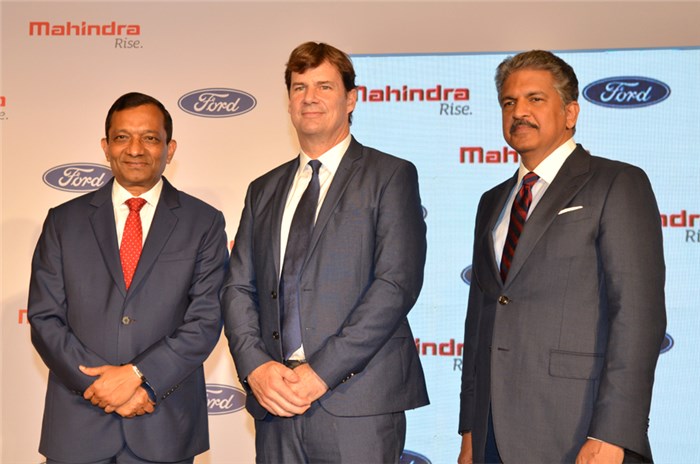 Mahindra and Ford have announced a new joint venture today – expected to be operational by mid-2020 – which will see both carmakers co-develop, market and sell vehicles in India and other emerging markets across the globe. Ford chairman Bill Ford addressed the media gathering in Mumbai via a video call, and said that Ford will continue to build vehicles in India, for India.

According to both companies, this new JV – valued at Rs 1,925 crore – will give Mahindra and Ford a combined Indian market share of 14 percent. Cumulatively, the two companies will have an annual production capacity of 1.2 million vehicles in India.

Mahindra will own a 51 percent controlling stake in this new joint venture, with Ford owning 49 percent. The JV will be operationally led by Mahindra, while its governance will be equally composed of representatives from Mahindra and Ford. Ford will transfer its India operations – including its personnel and assembly plants in Chennai and Sanand – to the new company formed under this JV. That said, it will retain its engine plant operations in Sanand as well as the Global Business Services unit, Ford Credit and Ford Smart Mobility.

Terming the decision to enter into a JV with Ford as an attempt to leverage the ‘best of the best’ from the two companies, Pawan Goenka, MD, Mahindra & Mahindra, confirmed there won’t be a joint brand, but both companies will continue to have their own identity in our market. Both Ford and Mahindra will continue to retail their vehicles via their respective dealer networks, but will leverage each others’ capabilities in a number of areas; like the co-development of new models, which will be headed by Ford India MD, Anurag Mehrotra.

Seven new models will emerge from this JV, including three new utility vehicles from Ford; beginning with the C-SUV we’d reported about in 2018. The new C-SUV will be built by Mahindra, and will be a derivative of the W601 – essentially the next-generation XUV500. The W601’s platform will be co-developed by Mahindra, SsangYong and Ford, and the vehicle produced will be positioned above the Hyundai Creta. This Ford C-SUV will be powered by Mahindra’s next-generation, BS6-compliant, 2.2-litre diesel engine. While it will share most of its core components with the Mahindra W601, Ford’s version of the vehicle will have an all-new exterior, a new interior and even a slightly different (and improved) chassis. Insiders say, “It will drive like a Ford.”.

The remaining two UVs are yet to be signed off, but both will be built by Ford. One of them is expected to be a brand-new compact SUV, which will either be based on the SsangYong Tivoli (Mahindra’s S201) or Ford’s own Vitara Brezza rival (codename: B763) which is currently under development. The Ford and Mahindra/SsangYong SUVs will, however, wear different 'top hats' and look quite different.

Electric vehicles are also on the agenda for this new joint venture, with Mahindra having previously confirmed that it is currently working on a Mahindra-badged electric version of the Ford Aspire, which is slated for a 2021 launch. There will also be collaboration and sharing of powertrains, starting with the Ford EcoSport that will feature Mahindra’s 1.2-litre turbo-petrol engine in place of the 1.0-litre EcoBoost in 2020; the latter unit will be phased out prior to the rollout of BS6 norms.

In addition to co-developing new models, the JV will use the Ford brand distribution network in emerging markets to export Mahindra cars and SUVs in addition to Ford vehicles. Mahindra says this JV will help bring together operations of both companies in over 100 high-potential emerging markets including Australia, Africa, Russia, and the ASEAN and Middle-east regions. 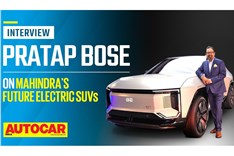