Ferrari has priced its new supercar in India from Rs 4.02 crore (ex-showroom). 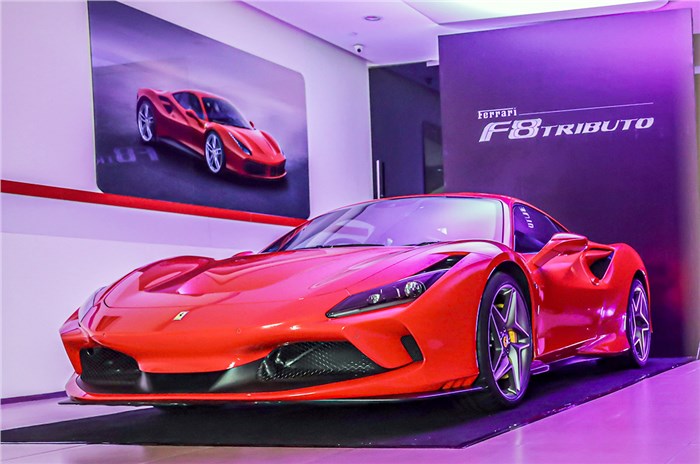 Deliveries for the Ferrari F8 Tributo – the brand’s latest mid-engine supercar – have begun in India. We had previously reported that the Ferrari would price the F8 Tributo from Rs 4.02 crore (ex-showroom).

What is the Ferrari F8 Tributo?

The Ferrari F8 Tributo is the successor to the 488 GTB, carrying over the rear mid-engine V8 layout. However, the F8 Tributo also comes with performance gains, parts and tech borrowed from the track-focused 488 Pista, weight savings and a new, more aerodynamic design, to help set it apart from the 488GTB. It is also expected to be the last non-hybrid V8 supercar the brand will produce.

What engine does the Ferrari F8 Tributo use?

It uses Ferrari’s award winning 3.9-litre, twin-turbocharged V8 petrol engine, which was also offered on the 488, though now it has been uprated to produce 720hp and 770Nm of torque.

The Italian carmaker claims the F8 Tributo can do the 0-100kph sprint in just 2.9sec, while 0-200kph takes just 7.8sec. The supercar can go on to hit a claimed top speed of 340kph, which makes it the fastest series production mid-engine Ferrari till date. Ferrari also claims it is 40kg lighter and has 15 percent more downforce than the 488. You can read our Ferrari F8 Tributo review for more details.

Why is it called the Ferrari F8 Tributo?

As the F8 Tributo name suggests, the model pays tribute to Ferrari’s older V8 Berlinetta models, with styling cues like the twin rear tail-light clusters, which are a modern take on the 1975 308 GTB lights, or the engine cover louvres that have been inspired from the iconic Ferrari F40. It’s also a tribute to its own twin-turbo V8 engine, which has won ‘Best Engine’ in the International Engine of the Year awards in 2016, 2017 and 2018. In 2018, it was also awarded the best engine of the last two decades.