300 new EV charging stations to be set-up as well, under the Automotive Mission Plan 2026. 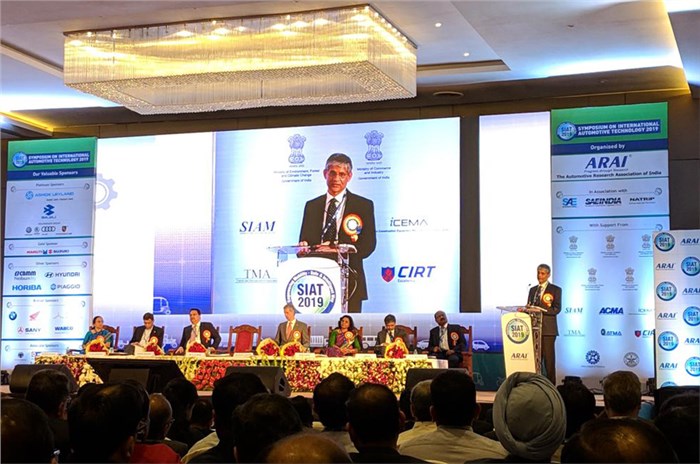 The Indian government has planned to increase the allocation of funds for the phase two of the FAME – Faster Adoption and Manufacturing of (Hybrid &) Electric Vehicles – India scheme by six-fold. This will include an investment of about Rs 5,500 crore over five years, which will provide subsidies for all types of electric vehicles (EVs) including two-, three- and four-wheelers, to promote environment-friendly vehicles and keep pollution in check.

Under FAME I, the government had first sanctioned a Rs 795 crore aggregate, which was later augmented to Rs 895 crore. The aim was to create demand incentives and infrastructure within which EV homologation facilities are set up at ARAI and other centres. These would support many R&D projects and oversee the launch of new pilot projects. One of these pilot projects was the launch of 450 EVs across nine cities under the public transportation system.

Speaking on the opening day of the Symposium on International Automotive Technology (SIAT) 2109 in Pune today, Dr Asha Ram Sihag, Secretary, Department of Heavy Industry, Ministry of Heavy Industries and Public Enterprises, said that the focus of the FAME policy under its second stage (for a five-year period from April 2019) is to support public transportation, shared mobility and electric mobility – for small vehicles such as two-wheelers, as well. “The government is looking to earmark Rs 5,500 crore which is under discussion with the Ministry of Finance currently. We expect that FAME II will kick-start after FAME I is phased out by the end of March 2019.”

Dr Sihag said that the government has invested in setting up homologation facilities for EVs at ARAI (Pune), GARC (Chennai) and ICAT (Manesar) as well as a new battery-testing facility at NATRAX in Indore. All of these facilities are to be functional in 2019. “The automotive industry in India should not face a shortage of advanced testing facilities once all the above-mentioned EV homologation units are functional in CY2019,” he remarked.

Dr Sihag also stressed upon the Automotive Mission Plan 2026, which has set three primary goals for the Indian automotive industry:

1. India should be the world’s third-largest global auto market by 2026.

2. India Auto Inc’s contribution to GDP (currently at 8 percent), to increase to 12 percent.

3. To generate additional employment – direct and indirect – for 65 million people.