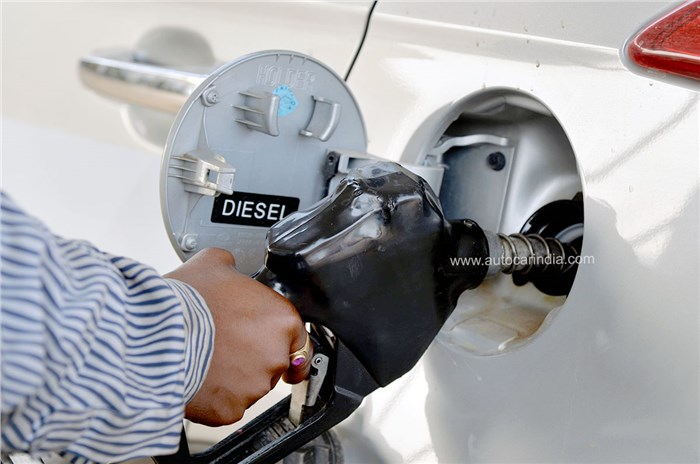 As batsmen in the IPL cricket tournament underway in Dubai are knocking centuries, the soaring price of diesel is all set to hit a century of its own. Wednesday’s price hike of 37 paise takes the price of diesel to Rs 99.17 per litre in Mumbai, up from the Rs 98.80 on Tuesday. In a span of six days, diesel has become costlier by Rs 1.33 a litre, or averaging 22 paise a day.

So, it could be surmised if the current run rate continues, diesel should cross the Rs 100 per litre mark by October 10, making Mumbai the first metro to hit a diesel century. In fact, in Maharashtra's Amravati district, diesel crossed Rs 100 per litre today. Mumbai was also the first of the four metro cities to cross the Rs 100 per litre of petrol mark on July 13 this year. The Rs 100-a-litre mark for diesel is still some distance away in Delhi (Rs 91.42), Chennai (Rs 95.93) and Kolkata (Rs 94.53).
Meanwhile, those tanking up on petrol have not been spared either. In Mumbai, the price of a litre of petrol rose by 29 paise to Rs 108.96 today. The price increase over the first six days of October is Rs 1.01 per litre, less than what it has been for diesel.

While the ongoing increase is the result of global crude oil prices hitting a seven-year high, it is also a fact that in India, motorists never really benefitted when crude oil prices had plummeted in early 2020. Today’s Brent crude price is $82.68 a barrel, the highest since 2014. And from the looks of it, global prices are not likely to cool down anytime soon.

Last month, the GST Council did not take a decision regarding bringing these fuels under its purview. This means that motorists will continue to pay wallet-busting prices to run their vehicles, unless they are using CNG or have made the shift to electric.

The current taxes – central and state – account for 55 percent of a litre of petrol and 50 percent of litre of diesel. The Centre got Rs 3,34,894 crore as excise duty from petrol and diesel last year. For both the Centre and financially fragile states, petrol and diesel account for a significant part of their revenue streams. While everyone is busy mopping up revenue during a difficult COVID-19 period, it is the customer who is silently suffering.

There is also the case of the government – both centre and states – aggressively driving the adoption of electric vehicles and electric mobility. While a number of states including Delhi, Maharashtra, Tamil Nadu, Telangana, Rajasthan, Assam and Kerala have introduced subsidy and incentive-laden EV policies, the government's recently announced PLI Scheme for India Auto Inc with an outlay of Rs 26,058 crore has given a huge fillip to the EV industry.

Petrol, diesel to remain out of GST purview