Model in question is a near-production Chiron with a more aerodynamic body kit on. 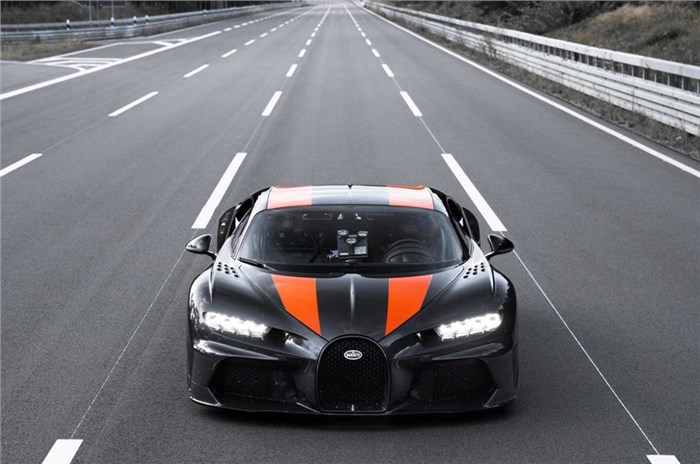 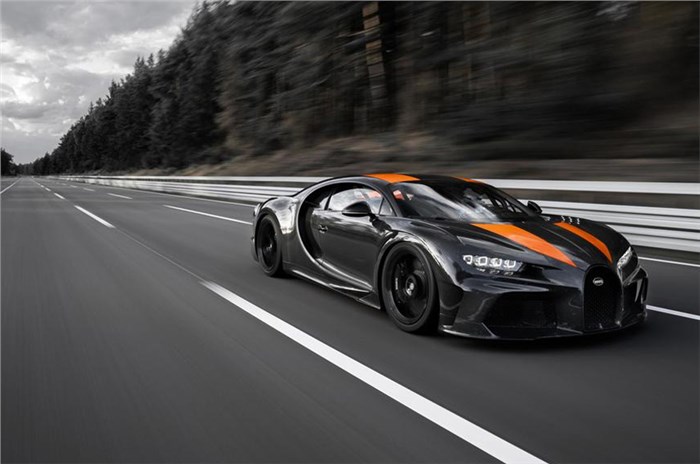 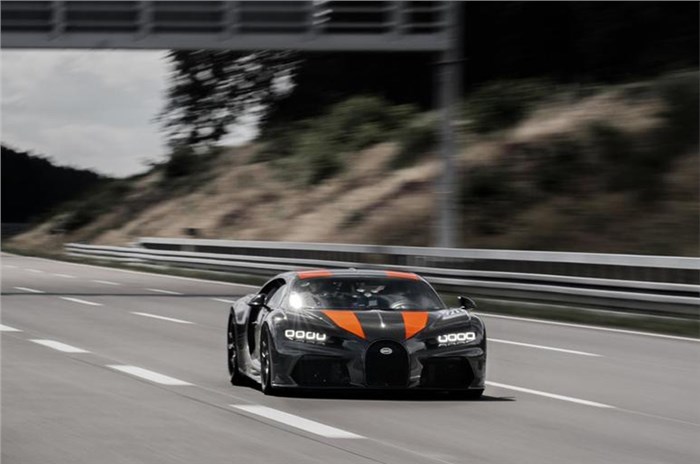 Bugatti’s decision to introduce the Chiron with a 420kph speed limiter left everyone wondering what it was truly capable of. Now the company has revealed the spectacular answer, with a slightly modified car smashing both the production car speed record and the 482.80kph (300mph) barrier.

The near-production Chiron included an additional safety cell, aerodynamic changes and a taller 7th gear, as well as a 1,600hp version of Bugatti’s 8.0-litre W16 quad-turbocharged engine taken from up from the 1,500hp of the ‘standard’ car. According to our sister publication Autocar UK, the mechanical changes will be incorporated into a celebratory limited-edition model.

Exceeding this top speed also relied on specially constructed Michelin Pilot Cup 2 tyres designed to handle the enormous forces of such speeds – at the record velocity, each was turning 4,100 times a minute. Each tyre was X-rayed before it was selected to ensure that none of the radial bands were touching each other; while this doesn’t matter at even the Chiron’s normal governed speed, it could have created heat.

Wallace also admitted that the enormous gyroscopic effect of wheels rotating so quickly became a challenge at ultra-high speeds. “At 322kph (200mph), you can barely feel it, but at 483kph (300mph), it’s absolutely enormous,” he told Autocar UK after the run, “It’s felt mostly on the front wheels and therefore the steering, like a spinning top when it starts to move it wants to continue to move.”

Dallara had designed the aerodynamic kit for the record-run – the Italian motorsport specialist builds the Chiron’s body – but there was no way to test simulation projections before the car was on track as speeds were too high for a wind tunnel. The aim was for neutral downforce, but that still meant huge forces running through the car’s structure. “Net-zero downforce front and rear sounds easy, as you’ve got the static weight of the car pushing down and that’s more than heavy enough.

"But it doesn’t mean the air is having no effect, there’s close to 2,000kg on the top surface of the body trying to pick the car off the ground and another 2,000kg under the car trying to pull it back down – two fighting forces that come to four tonnes roughly… So you’ve got to be absolutely sure that everything on the car is secure enough to go this fast.”

Wallace also discovered that at higher speeds, a recently resurfaced part of the 8.8km-long straight at Ehra-Lessian was unsettling the car. “You’d barely notice in a normal car, but at those speeds, it felt huge,” he said. The transition soon being known by the engineering team as ‘the jump.’

After four days at Ehra-Lessien, the Chiron had managed a peak speed of 482.5kph (299.8mph), tantalizingly close to the 483kph (300mph) barrier – but Wallace was struggling to go quicker. Then, on the record-setting lap, he felt confident enough over ‘the jump’ to push harder: “After it landed and had a bit of a weave about, I thought it was the best it’s been, the cross wind was a little bit less and I just kept it pinned.”

Wallace saw a peak of 490kph on the car’s GPS display, so knew he had set a record, but the live telemetry had been unable to keep up and had showed a maximum of 479kph. For several minutes, as the car returned to the pit area, the crew were unaware that the Chiron had broken the barrier. “They couldn’t work out why I was so happy on the radio,” Wallace admits. The Chiron’s onboard data recorder then confirmed the record time.

But Bugatti intends to leave it there, with president Stefan Winkelmann saying that the company’s quest for ultimate speed is satisfied. “We have shown several times that we built the fastest cars in the world. In future, we will focus on other areas."

“Bugatti was the first to exceed 300mph – its name will go down in the history books and will stay that way forever.”

For Wallace, this is the third time he has driven a car to the production car record, having previously done so with both the McLaren F1 and Jaguar XJ220. “It’s pretty bloody cool,” he told Autocar UK. “If somebody said to me even two years ago that I was going to go over 300mph, I’d have thought they were out of their mind.”