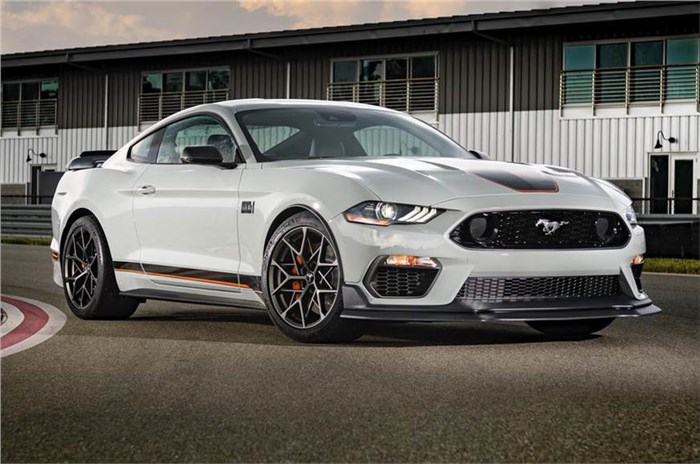 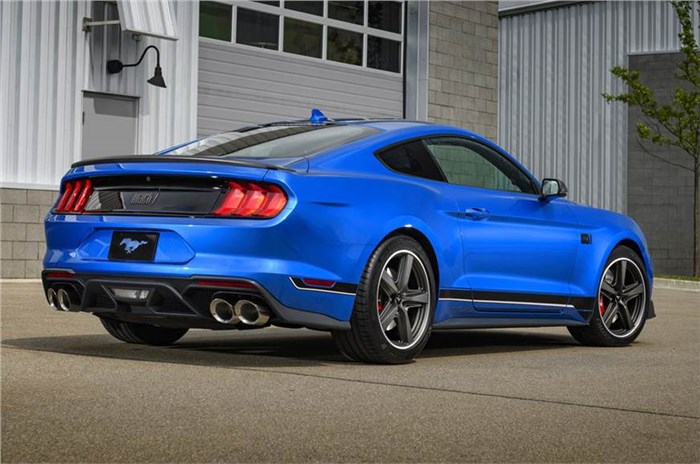 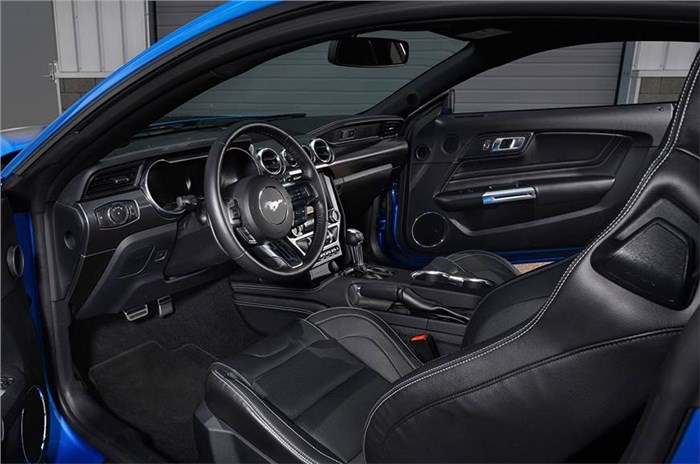 Ford has revived the historic Mach 1 nameplate for a new special edition of the Mustang that gets more power, bespoke styling and a track-focussed chassis setup. The company says that the new Mustang Mach 1 “bridges the gap” between the standard Mustang and the high-performance GT350 and GT500 tuned by Shelby.

As with previous Mach 1 Mustangs, the latest iteration is set apart from the standard car with a performance-oriented bodywork package, the most obvious element of which is the bespoke ‘shark-nosed’ front end. It has been designed for optimum aerodynamic efficiency and features a unique 3D grille, mock retro-style light designs and new air intakes. Together with an extended underbody chassis tray, the improvements mean the Mach 1 offers 22 percent more downforce than a Mustang GT with the Performance Pack.

Low-gloss trim elements, including the mirror caps, spoiler and badges, are said to “provide a premium look”, and a bespoke set of 19-inch, five-spoke aluminium wheels are inspired by the Magnum 500 items worn by the original Mach 1.

The Mustang Mach 1 takes its power from an uprated version of the Mustang’s 5.0-litre V8, making 480hp and 570Nm of torque. The increases come courtesy of an intake manifold, oil cooler and oil filter adapter borrowed from the Shelby GT350.

Performance figures are yet to be confirmed, but the aerodynamic and mechanical tweaks mean the Mach 1 are likely to comfortably beat the standard car’s 4.3-sec 0-100kph time and 250kph top speed.

As standard, the Mach 1 sends its power to the rear wheels via a 6-speed manual gearbox (also a Shelby item) that has been equipped with rev-matching, and is mated to the twin-disc clutch and short-throw gearstick from the Mustang GT. A 10-speed automatic gearbox is an optional extra.

An optional Handling Package, available only with manual cars, brings a larger front splitter, reshaped front wheel lip mouldings, a Gurney flap and tyre spats from the Shelby GT500 - helping to increase downforce by an additional 128 percent over the Mustang GT. The wheels too are wider, up from 9.5inches to 10.5inches at the front, and 10inches to 11inches at the rear.

The interior is largely identical to that of the standard car, save for aluminium trim accents, new door sill plates, a white ‘cue ball’ shift knob and engraved badging throughout.

Buyers opting for the optional Appearance Package can have their car painted in a bespoke shade ‘Fighter Jet Grey’, and can specify reflective bonnet and side stripes in red, white or orange. Standard colours include Race Red, Grabber Yellow and Twister Orange.

The Mustang Mach 1 is set to go on sale in international markets in 2021.

For the Indian market, Ford is expected to launch the facelifted Mustang sometime later this year, and this will be followed by its all-electric sibling, the Mach E, sometime in 2021.