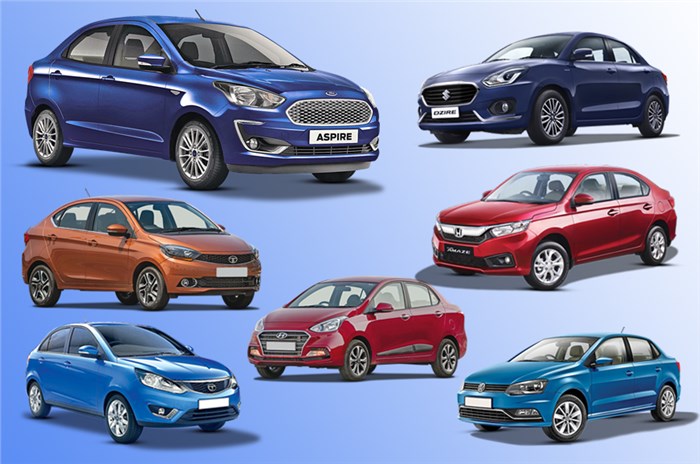 The updated Ford Aspire is out. Here’s how it compares with all its compact sedan rivals on paper.

Ford has launched the updated Aspire compact sedan. Additions to features aside, the model gets new petrol engines, a diesel engine tweaked for better efficiency, as well as a new automatic gearbox option. We analyse how the Aspire measures up to its key rivals, namely the Maruti Suzuki Dzire, Honda Amaze, Hyundai Xcent, Tata Tigor, Tata Zest and Volkswagen Ameo.

To take advantage of the excise benefits on ‘small cars’, all the sedans measure just under 4 metres in length. However, at 2,490mm, the Aspire has the longest wheelbase, while the Amaze, Zest and Ameo come in at a close second, measuring 2,470mm between the two axles. With an overall width of 1,704mm, the Aspire is almost as wide as the Tata Zest. It is beaten only by the Dzire, which has a width of 1,735mm. The Amaze, Ameo, Tigor and Xcent have narrower bodies.

How do the exterior dimensions translate to cabin space? The Dzire, Zest and Amaze are the most spacious cars in the segment (in that order), while the Ameo offers the least cabin room. The Aspire slots in between its rivals. It is important to bring in the fact that the Dzire and Zest offer the most comfortable seating for three passengers in the back.

A word on boot space, too. The Aspire has one of the smallest boots in the segment, with a capacity of just 359 litres, besting only the Ameo’s 330 litres. Those indulging in frequent weekend getaways will find the Amaze and Tigor to offer the most room for luggage, as both cars offer segment-leading boots of 420 litres and 419 litres, respectively.

Of the other things, Ford has upsized the Aspire’s wheels to 15-inch rims. Resultantly, the Ford not only looks better but is also finally at par with the rest of the competition in this area.

The big talking points on the updated Aspire are its new petrol engines. There’s Ford’s new 1.2-litre, three-cylinder petrol mill that comes in place of the older 1.2-litre, four-cylinder unit. The new 1.2 engine’s 96hp and 120Nm of torque not only better the outgoing unit’s figures by 8hp and 8Nm, but also make it the most powerful of the 1.2-litre petrol engines in the segment. The Aspire only extends its advantage on the power scale when you take into account the new 1.5-litre, three-cylinder petrol engine that is exclusive to the automatic version. The Aspire 1.5 makes 123hp and 150Nm, which are significantly more than the pre-facelift model's four-cylinder 1.5’s 112hp and 136Nm of torque.

Producing 90hp each, the petrol Amaze and Zest come closest to the Ford in terms of power. The Tigor, Xcent and Dzire aren't that far behind either. The Ameo's new 1.0-litre motor produces all of 76hp and 95Nm of torque, which is significantly down on the Ford's output figures. Do note, when you factor in the car’s kerb weights, it’s the Dzire with the best power-to-weight ratio of the manuals.

Except the Zest and Ameo, all other petrol-powered compact sedans come with the options of manual and automatic transmissions. In the case of the Aspire, the 5-speed manual is paired with the 1.2-litre engine and the 6-speed auto (now a torque converter as opposed to the dual-clutch unit on the earlier car) is mated to the more powerful 1.5-litre mill. The Xcent makes do with a 4-speed torque converter, the Dzire and Tigor use 5-speed automated manual transmissions (AMTs), while Amaze is the only one that employs a CVT.

Shifting focus to the diesels, the Aspire's diesel remains unchanged in terms of power, putting out a strong 100hp and 215Nm of torque. The Aspire’s power and torque figures are second only to the Ameo’s 1.5 unit, which makes a class-leading 110hp and 250Nm of torque. As in the case of petrol, the diesel Amaze and Zest follow close up on the heels of the Ford and Dzire, while the Xcent and Tigor are found lagging behind.

This time around, too, Ford has decided to skip on an automatic offering for its Aspire diesel. Those looking for a diesel-automatic will find their choices limited to just four cars – Dzire (AMT), Zest (AMT), Amaze (CVT) and Ameo (dual-clutch transmission).

The facelifted Ford differs from the former model in terms of fuel efficiency. The 1.2-litre petrol-manual’s official figures of 20.40kpl on lower variants and 19.40kpl on top spec trims, and the diesel’s 26.1kpl, are an improvement over comparable versions of the outgoing Aspire. Do note that the Aspire petrol-automatic does sees a slight dip in efficiency, with a figure of 16.30kpl. However, if the rising fuel prices are something of a concern for you, choosing the less powerful Dzire and Tigor will reap benefits in the form of lower running costs. The Maruti and Tata offerings have class-leading fuel economies of 22kpl (Dzire petrol), 28.4kpl (Dzire diesel), 23.84kpl (Tigor petrol) and 27.28kpl (Tigor diesel).

A look at the price charts reveals Ford’s pricing strategy is aggressive. The Aspire undercuts all its key rivals, the Maruti Suzuki Dzire, Honda Amaze and Hyundai’s Xcent. However, the two Tata compact sedans – the Tigor and the Zest – do start with a lower price tag.

Dzire vsTigorvs Xcent vs Ameo vs Amaze vs Aspire comparison