The updated Ford Aspire is now on sale. Here are five key things you need to know about it. 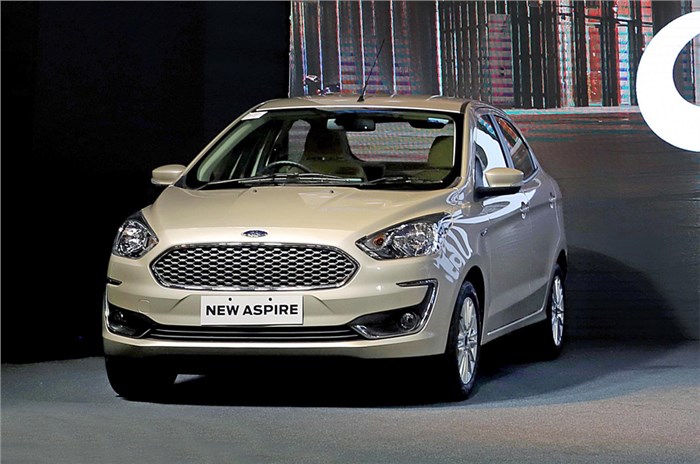 For long, the competent Ford Aspire has been on the sidelines in the competitive compact sedan segment. However, things could change with the arrival of the updated Aspire that gets a visual makeover, more equipment, new engines and more. We’ve listed the five most important things you need to know about the updated model.

It’s got a visual makeover

The Aspire gets a mild facelift but the tweaks have done plenty to uplift the Ford’s look. The front bumper has been restyled with the fog lamp housings and an Aston Martin-esque grille embellished by more chrome. The headlamps have been reprofiled as well, but, sadly, LED DRLs are still not part of the package. What’s also helps enhance the Aspire’s look are the larger 15-inch wheels. The old model’s 14-inchers always looked a size too small.

It’s got a new infotainment system

With Maruti Suzuki's SmartPlay system and Honda's Digipad, infotainment was one area where the Aspire's rivals had a clear advantage. But Ford has levelled the playing field with the facelift. The mid-level Trend+ and Titanium trims now come with a free-standing 7.0-inch centre touchscreen, while the top-spec Titanium+ gets a 6.5-inch touchscreen and Ford's Sync 3 infotainment system bundled with Android Auto and Apple CarPlay. We’ve experienced the unit on the Freestyle and EcoSport and rate it as among the best touchscreen systems.

Safety gets a fillip with this update. ABS and EBD, which were optional on the base Ambiente trim, are now standard across the range, as are rear parking sensors and seatbelt reminders for the front seats. ESP, traction control, hill start assist on the petrol automatic and dual standard airbags (with six airbags on the top variant) are on offer like before.

The updated Aspire gets two new petrol engines. The earlier model's 1.2-litre, four-cylinder petrol unit has made way for Ford’s new 1.2-litre, three-cylinder unit that made its debut on the Freestyle earlier this year. With 96hp and 120Nm on tap, the new 1.2 unit is not only more powerful than the previous unit that made 88hp and 112Nm, but is more fuel efficient too. Fuel efficiency is up from 18.16kpl to 20.40kpl (for lower variants) and 19.4kpl (for the heavier top-spec variants). The 1.2 petrol is offered solely with a 5-speed manual gearbox.

Also new on the Aspire is a 1.5-litre, three-cylinder petrol unit that takes the place of the 1.5-litre, four-cylinder unit. Power is up from 112hp and 136Nm to 123hp and 150Nm. As before, the larger petrol engine is available only with an automatic transmission. The dual-clutch transmission, however, has been replaced by a 6-speed torque converter unit. Also, do note that the increase in output and switch to a torque converter is accompanied by a drop in fuel economy. The official fuel economy for the Aspire petrol automatic is now at 16.3kpl, down from the earlier 17kpl.

The 1.5-litre diesel churning out 100hp and 215Nm, mated to a 5-speed manual remains unchanged, but Ford has given it a mild retune that resulted in a slight bump in fuel economy from 25.83kpl to 26.1kpl..

It’s more affordable than before

In spite of a long list of updates, the facelifted Aspire is almost Rs 20,000 cheaper than the older model. The petrol MT is priced at Rs 5.55-7.24 lakh and diesel MT at Rs 6.45-8.14 lakh, while the petrol AT will set you back by Rs 8.49 lakh. The introduction of a new mid-spec Trend+ trim has also increased the number of variants on offer. Ford is also claiming class-best maintenance costs and has also launched the updated Aspire with a class-leading 5-year/1,00,000km warranty.