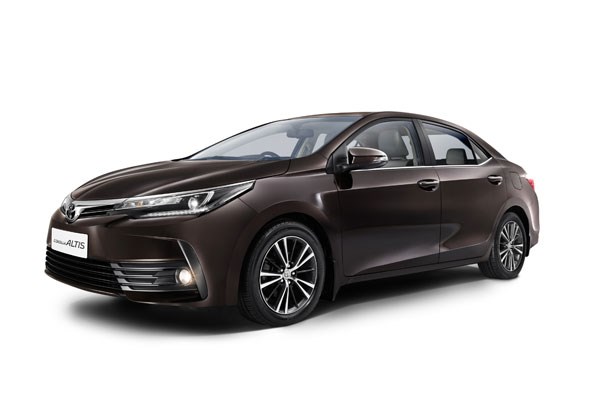 Toyota has launched the Corolla Altis facelift at a starting price of Rs 15.87 lakh for the base petrol and going up to Rs 19.91 lakh for the top trim. Interestingly, with the facelift, Toyota has discontinued the old base J trim along with reducing the number of diesel variants from three to two. As before, there is no top trim diesel car.

A rival to the likes of the Skoda Octavia and Hyundai Elantra, the Corolla gets sleeker styling with a revised front end and tweaked rear. The interior too gets updates with a revised dashboard with new circular side air-con vents, and the centre console featuring new air-con controls.

In terms of equipment, the facelifted Corolla Altis gets equipment such as new LED headlamps with daytime running lamps, LED tail-lamps and new design alloy wheels. A touchscreen infotainment system is offered as standard on the petrol model but is available as an option on the diesel and it now features MirrorLink connectivity. On the safety front, the top petrol trim features seven airbags along with stability control and hill start assist. Five airbags and ABS are offered as standard on the other petrol trims, while the diesel only gets three airbags across the range.

There are no changes under the hood, with the refreshed Corolla carrying forward the 1.8-litre petrol and the 1.4-litre diesel from the pre-facelift model.

The revised pricing positions the Corolla above its chief rival, the Hyundai Elantra which is priced from Rs 12.99 lakh. Since sales (April 2016-January 2017) of the Corolla and the executive sedan segment on the whole have fallen significantly compared to the previous year, with this facelift, Toyota hopes to arrest this decline and stave off the competition. The segment is also expected to see the launch of new models in the form of the facelifted Octavia and the return of the Honda Civic.