How does the TVS iQube fit into the growing electric two-wheeler space in India? 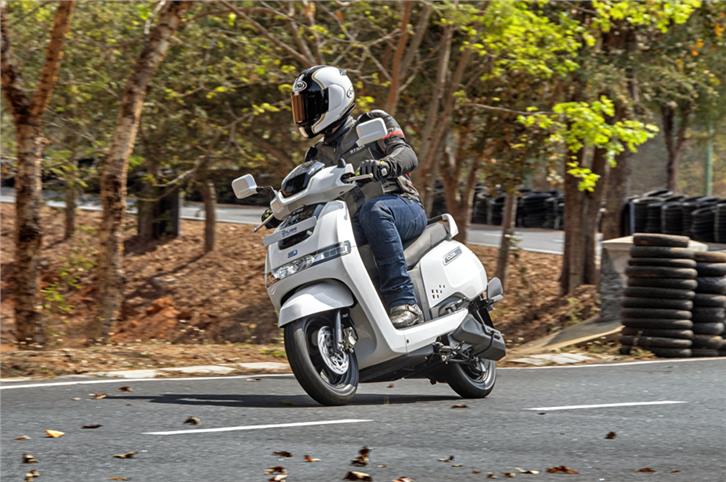 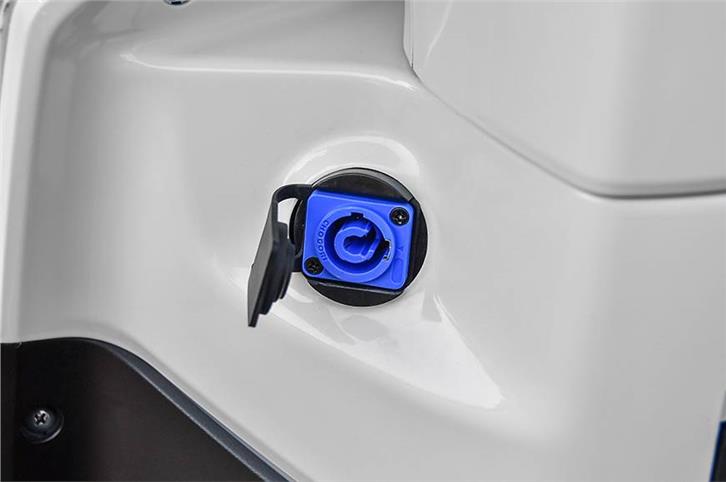 The charging socket is positioned below the handlebar. 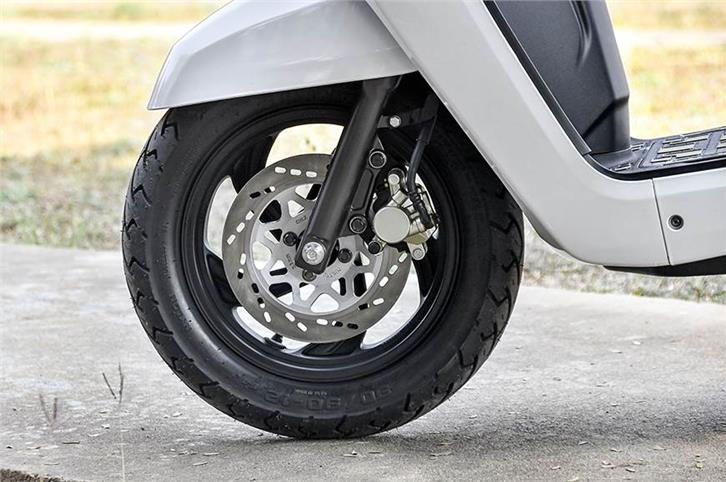 Telescopic fork and disc brake similar to the one on the TVS Jupiter. 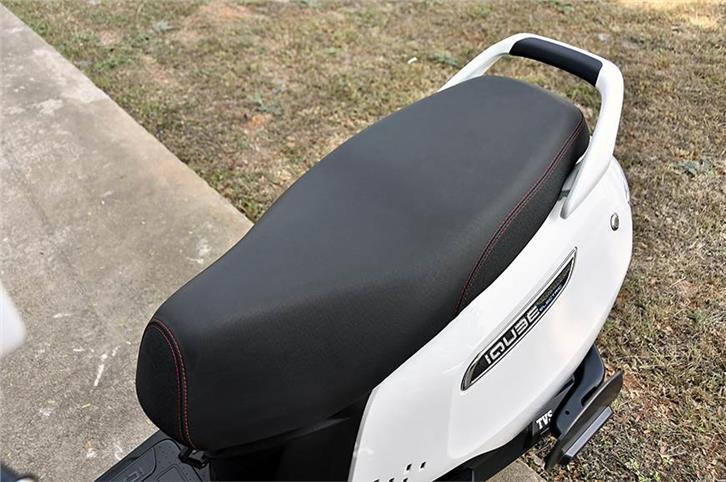 The iQube's seat is quite spacious.

It’s only been two months into 2020, and we’re already riding the third new electric two-wheeler from a big name. We are finally getting options, and how! The one in question here is called iQube and almost refreshingly, it doesn’t come from a brand that was just formed a few months ago to sell us rebranded Chinese products. The iQube scooter marks TVS’ proper foray into the Indian electric two-wheeler space. Yes, TVS beginning its shift to e-mobility is a big deal, but what we were more curious about is if the iQube itself makes as much of an impact. 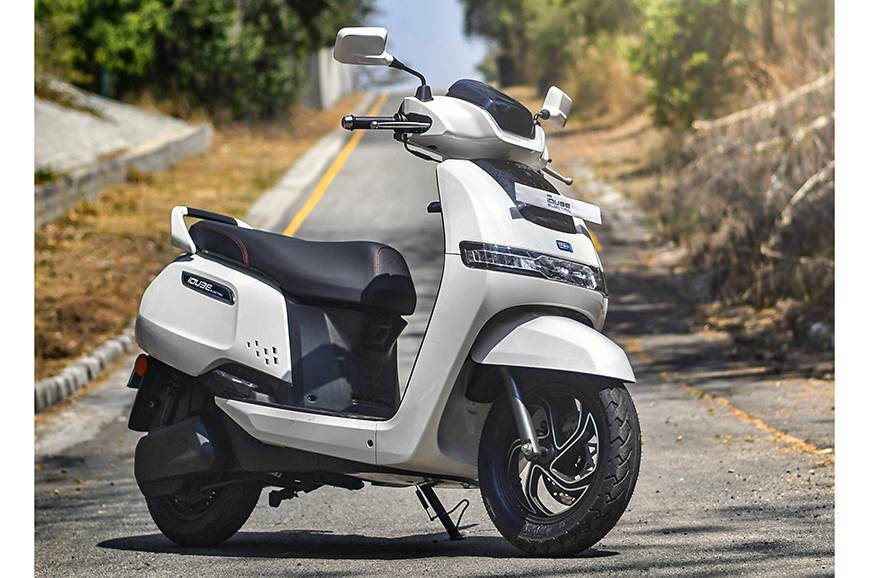 Ever since the iQube was unveiled, it’s been drawing in polarising comments about the styling. To best describe it, it looks like it's been designed to be a futuristic product, but one that’s been designed close to a decade ago. And that’s not far from the truth really, TVS did showcase it in concept form back in 2012. Now while that may sound negative, it isn’t. The narrow, horizontal headlight and tail-light look unique and almost Robocop-like. The rest of the design is extremely simple, and it almost feels like TVS has purposely opted to go this route as conventional designs attract buyers of a wider age demographic. We’ve seen the company take a similar approach with its popular 110cc scooter, the Jupiter.

While we don't have a problem with the design, there were a few small areas where the quality levels were inconsistent, but this could be because the scooters we were riding were initial test bikes. We'll reserve final judgement when we get to spend some time with the production models. 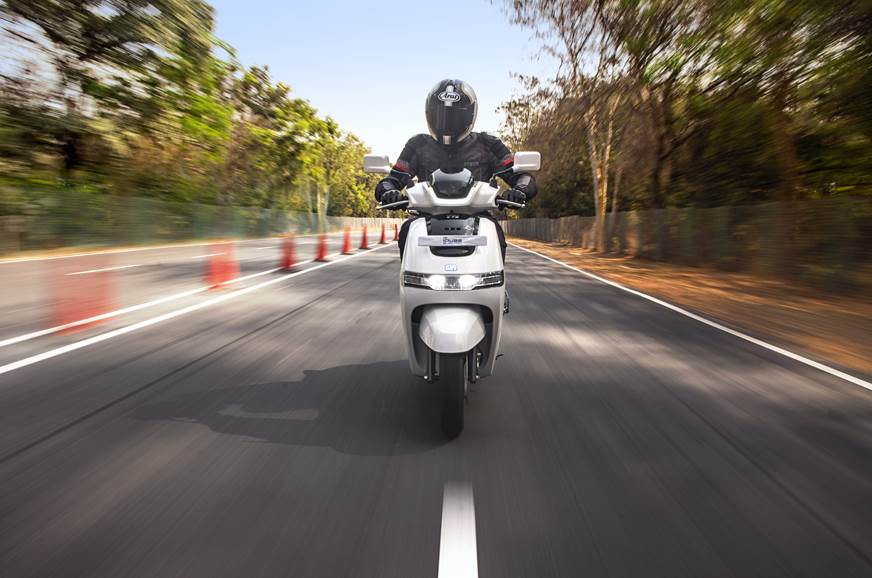 On the move, the scooter will leave you quite impressed, especially when it comes to acceleration. The hub-mounted motor is made by Bosch and has a peak power output of 4.4kW. This is a fair amount higher than that of the Chetak’s 4.08kW motor, but the iQube's throttle response feels instant and is not as softly delivered as the Bajaj when you first open the accelerator. However, it's more along the lines of immediate, rather than jerky, and while I suspect it might take some getting used to, I don't think this will be a problem.

What is really nice is that acceleration in both modes (Economy and Power) is the same. The only difference between the two is the limit on the top speed. In Economy, you can go up to 45kph, and this is also where TVS is claiming that you will get a range of 75km. Top speed, meanwhile, will go up to a speedo-indicated 80kph in Power mode, but the range is said to go down to 55km here. What we also liked is how the performance doesn’t go down drastically with a drop in charge. I managed to hit a speedo-indicated 70kph even with just 16km of range remaining, according to the TFT display. Thankfully, the iQube also doesn’t cut throttle input when you are on the brakes, like almost all Chinese scooters do, which means low-speed manoeuvres won’t be a problem. 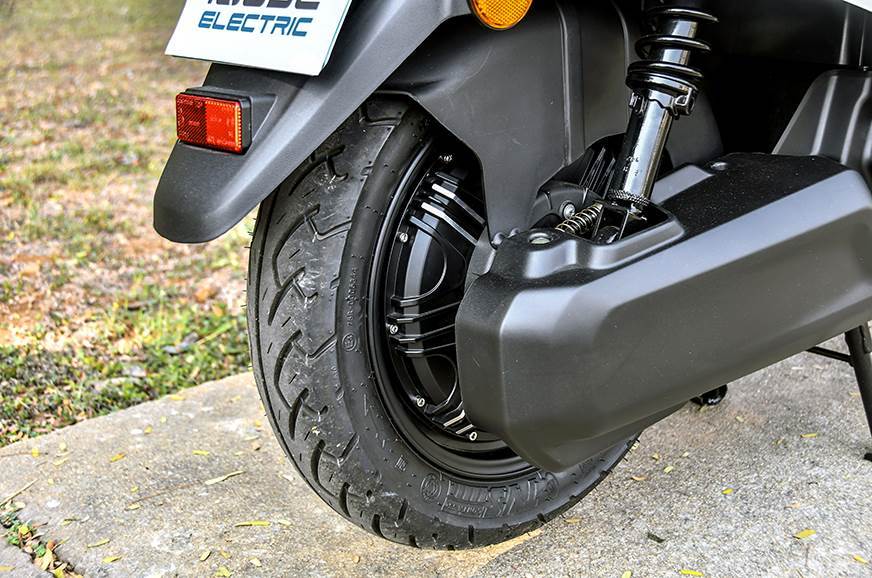 Hub-mounted motors are usually considered inferior to frame-mounted units, but the iQube seems to have no problem. I managed to climb a 10-degree incline with a pillion and on low charge at about 35kph, which isn’t bad. Another setback usually experienced in using hub-mounted motors is that they upset the weight distribution of a two-wheeler. Since a lot of the weight is at the rear wheel, it doesn’t feel like a natural two-wheeler, but TVS has done a good job masking this. The battery is non-removable, but TVS has cleverly split it into three different packs, with one of them positioned under the footboard. This brings some of the weight-bias towards the front and the company also says that the way the twin rear shock absorbers have been tuned to help the iQube feel more natural.

Natural it does. We had the opportunity to carry a good amount of speed through the corners at the company's test track and the scooter didn’t feel nervous or twitchy at all. The grippy TVS tyres on the 12-inch wheel at both ends also helped improve stability. Lastly, the 220m front disc and 130mm drum brake were quite effective and got the 118kg (slightly higher than the Ntorq 125) scooter to a standstill quite quickly. 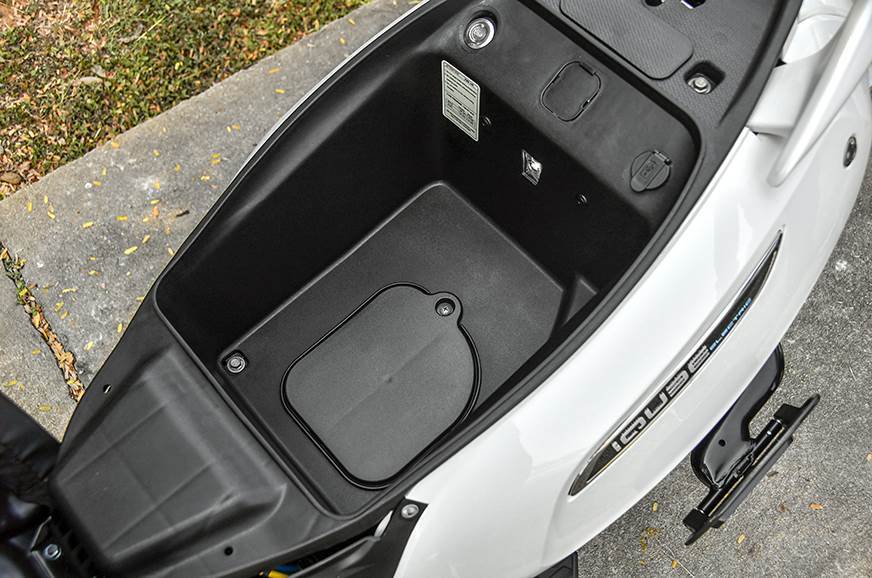 As has become the standard with electric vehicles, the iQube gets LED powered lights all around. These appeared to be quite bright in the daytime, but we’ll have to put the headlight to the test when we get the scooter for a road test. Speaking of lights, the iQube also gets one under the seat, but it only lights up with the key in the ignition. This means you need to remove the key from the seat lock at the side of the scooter and put it back into the ignition to light up the boot. Like many other scooters these days, you also get a USB charging slot under the seat. While TVS is claiming that the underseat storage space fits a full-face helmet, my international-spec didn’t, but this is the case with almost all scooters.

Moving on to one of the biggest highlights of this scooter – the TFT instrumentation. It gets Bluetooth connectivity and the screen graphics are legible, even under direct sunlight. The dedicated iQube app, along with the Bluetooth function, shows incoming call alerts, SMS notification and turn-by-turn navigation on the screen. The app also features Geo fencing, trip data recording, battery charge status, range and a lot more. What can also be seen via this screen is the scooter’s park assist function, which will let you creep it forward or in reverse. 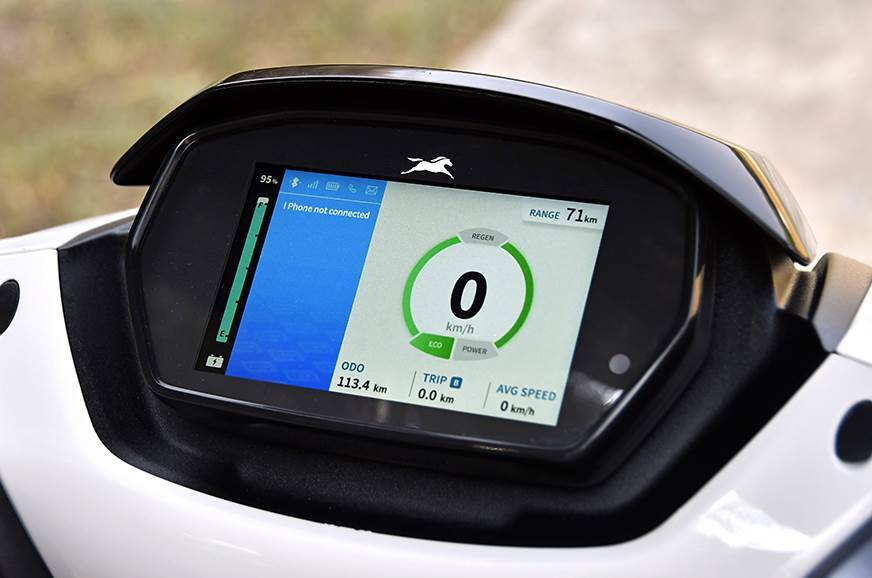 It certainly feels more premium than the LCD display on the Bajaj Chetak and on par with the one on the Ather. However, the screen takes quite a long time to start and we hope a future OTA update fixes this issue.

Every iQube also comes with a home charger that’s included in the price. It takes about 5 hours to charge the battery and there’s no fast-charging option. Also, this home charger is RFID-activated, which ensures that nobody misuses it when it's unattended. The charger, battery packs, and the battery management system have been built completely in house, except for the cells in the battery packs that have been sourced from LG in Korea. 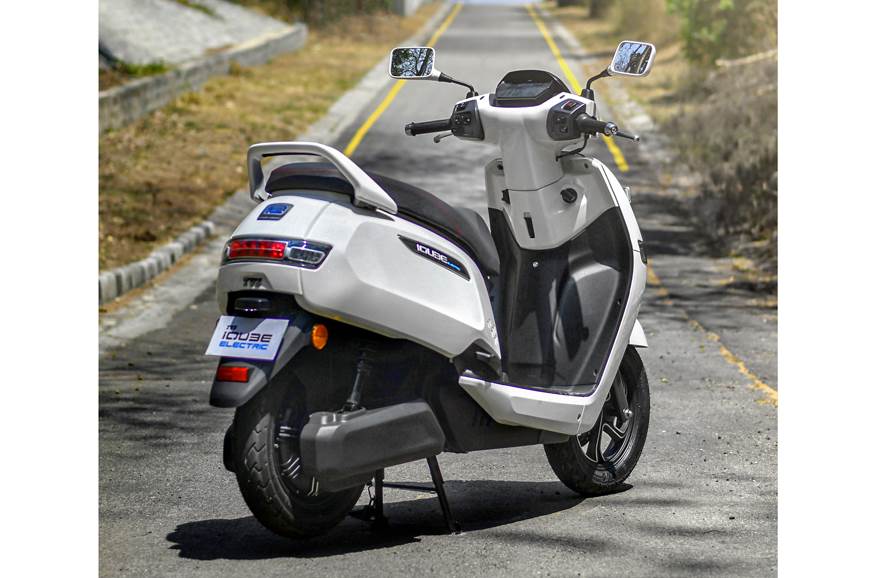 At Rs 1.15 lakh (on road, Bengaluru), the TVS iQube is a little cheaper than the top-spec Bajaj Chetak and significantly more affordable than the new Ather 450X, although you have to factor the annual subscription cost that TVS will introduce sometime in the future. This subscription cost too is expected to be much less than what Ather is asking for, and we're told it might be somewhere around Rs 900 per year. At present, the scooter is only available in Bengaluru and TVS plans to introduce it across other cities in a phased manner.

That’s the iQube for you. In short, it’s a simple, quirky-looking city runabout, with the limited range being the only big drawback, and that's something we'll have to live with till battery technologies mature. If you can't wait that long, and only want to buy a product from a well-established Indian manufacturer, then this scooter is now the second option available to you. 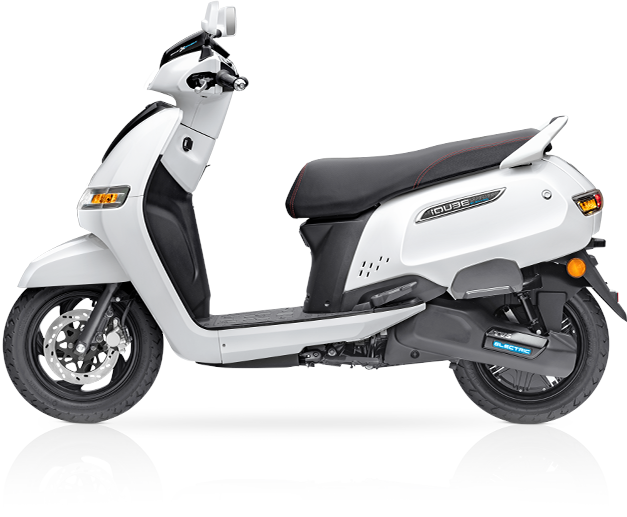 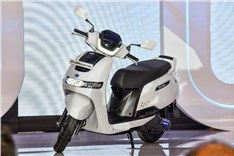 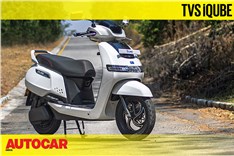