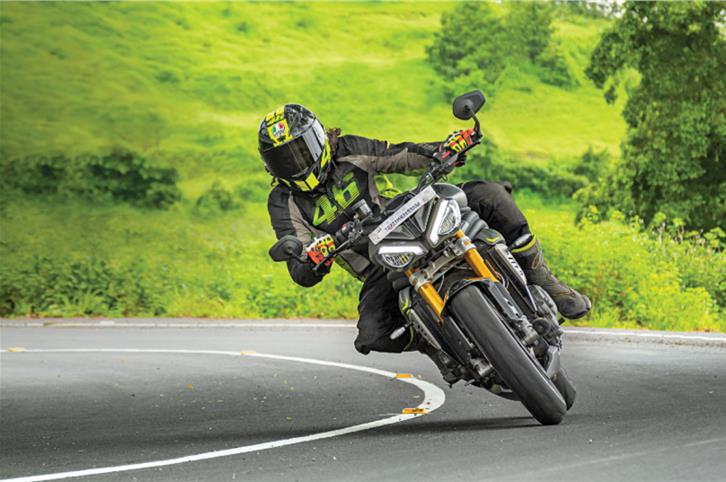 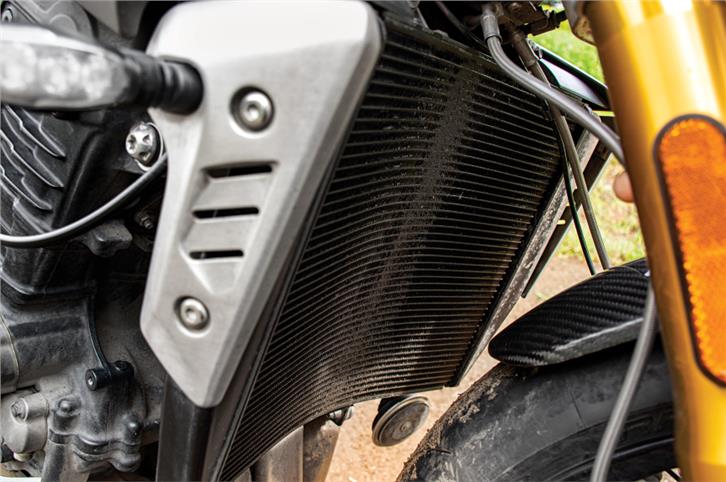 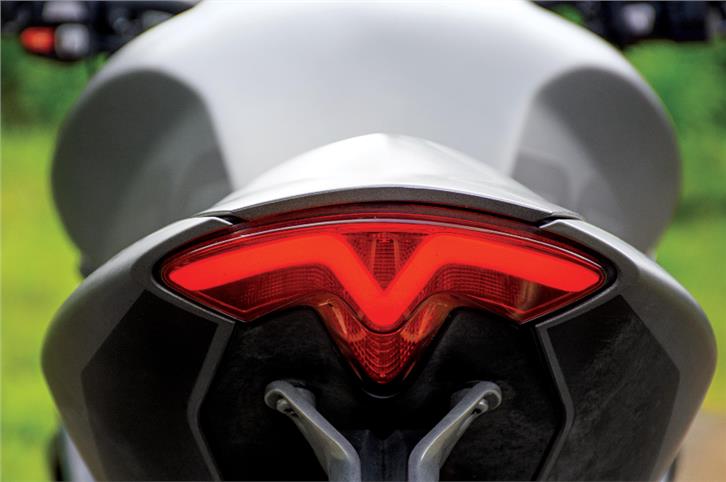 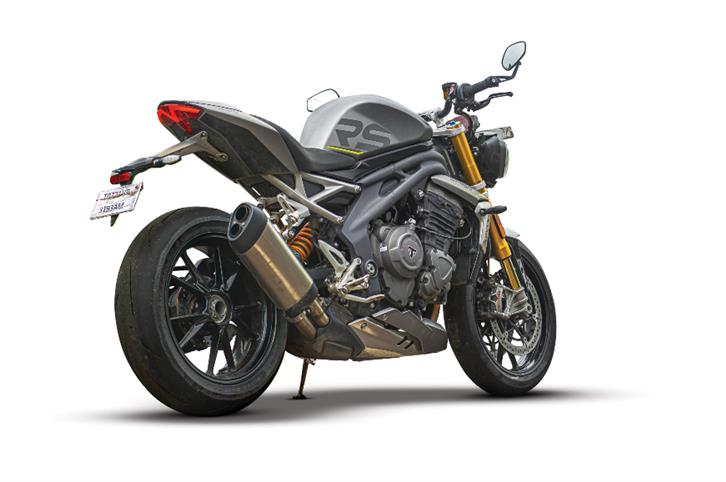 Triumph’s most powerful bike receives a much-needed update that once again makes it a front-runner in the streetfighter class it created.

Rishaad was a little perplexed by my apparent lack of enthusiasm when he told me I’d be riding and reviewing this bike. Truth be told, I was overcome with excitement but was doing my best to downplay it, lest it should cause him to second-guess his decision to let a 24-year-old loose on a 180-horsepower motorcycle. The eagerness was accompanied by more than a touch of apprehension, which speaks volumes about how formidable this Speed Triple 1200 RS seems on paper. Sure, it’s down on power to something like the Ducati Streetfighter V4, but still easily one of the most powerful naked bikes in the world; it produces more torque than the Duc, while being lighter too!

So I walked into the Triumph dealership in Pune, expecting to be greeted by a big, angry brute. After all, that’s how most previous Speed Triples have been described, and this one is the most powerful, fastest-accelerating version yet. But I rode away pleasantly surprised and breathing a whole lot easier. In the trafficked city streets surrounding the showroom, the big Speed felt fairly unintimidating at urban speeds. Throttle response was friendly, on-off transitions were smooth, and there was no lurching. 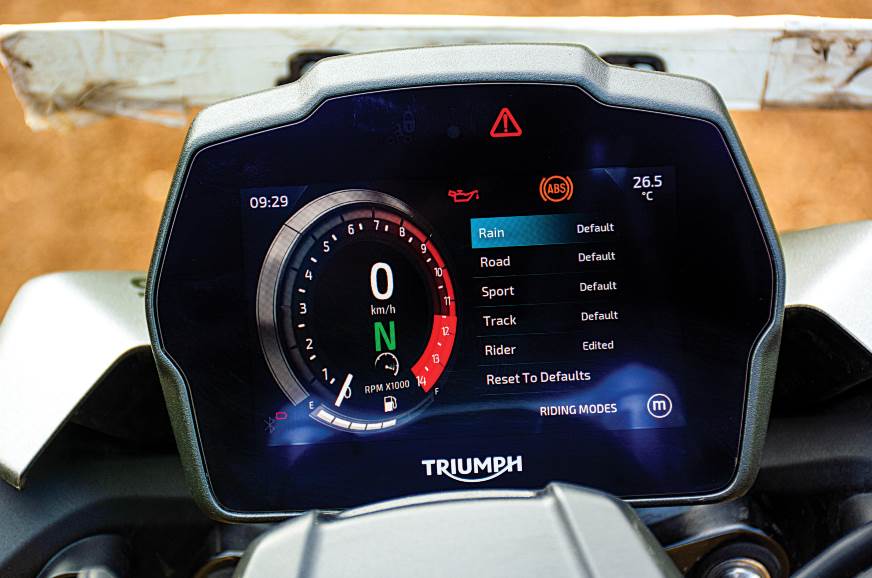 TFT screen is crisp and has loads of functionality.

I looked down at the crisp TFT screen, suspecting that perhaps the bike was in Rain mode. But no, she was in Road. This 1,160cc, inline-triple cylinder engine isn’t the most tractable motor around, though, and despite the extra torque, it’s not as easy to ride in the city as the smaller Street Triple. It’s not terrible, but doesn’t like anything below 2,000rpm and it can stall easily if you don’t grab the fairly heavy clutch in time while slowing for speedbreakers. Above that it pulls cleanly, but as it does so, it sort of shudders and groans, as if to say to you, “Give me more revs!”

Once traffic thinned and we approached the highway to Mumbai, I obliged the engine’s request. A lot changed after that acceleration run. The same bike that seemed like an accommodating friend just moments earlier, suddenly unleashed mind-bending, arm-wrenching, stomach-churning levels of acceleration, while belting out a soundtrack that transitioned from a deep growl to a spine-tingling howl. The three-part Triumph orchestra sounds even more glorious here than it does on the brand’s smaller triples. And the more I piled on the revs, the more ferocious this monster became. The Speed Triple’s power and sound are truly intoxicating, and it’s a real Bruce Banner/Incredible Hulk bike: rather cordial at reasonable revs but a complete animal when the tacho climbs. It hammers that fact home with a surprisingly buzzy handlebar at high revs, though the rest of the time, it’s quite refined. 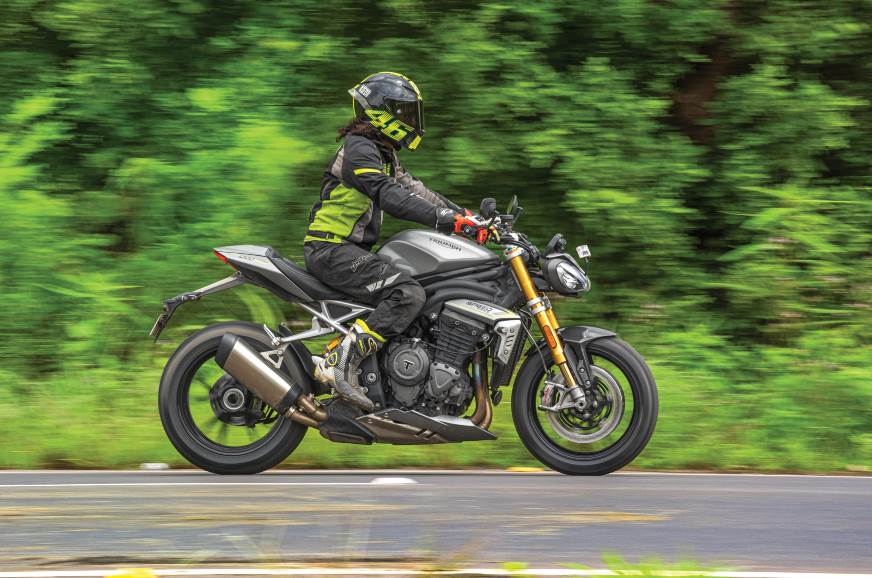 As speeds went up, it also saw me working the gearbox more frequently, which is an absolute pleasure due to a slick-shifting quickshifter. Upshifts are smooth but it’s the downshifts that are really enjoyable, thanks to that epic soundtrack. Sport and Track mode see less intrusive settings for the IMU-assisted traction control and ABS, which is good, but the wheelie control and traction control systems are intertwined, which is not so good. Nevertheless, the Speed’s electronics suite is vast and sophisticated, and works with a soft hand to keep things in check. I had to do a bit of wet-weather riding on the Speed, and while the Metzeler Racetec RR rubber is reasonably grippy in the wet (and superbly grippy in the dry), the glassy tarmac that most of Mumbai is covered in meant that the bike stepped out under acceleration a few times, before being reined in by the electronics. But that was in Road mode. As soon as I switched over to Rain mode, throttle response was immediately more soft and fluffy, and traction control worked overtime to keep everything in check.

Over the remainder of my time with the bike, I encountered the usual cocktail of wildlife, oblivious pedestrians and idiot drivers on our roads, and the Brembo braking set-up never ceased to amaze me. With twin 320mm discs and Stylema calipers up front, there’s little room for improvement. Stopping power seems to be in endless supply, and thanks to an MCS radial master-cylinder, the feel can be fine-tuned as per your liking. Even the 220mm rear disc feels super sharp and powerful! 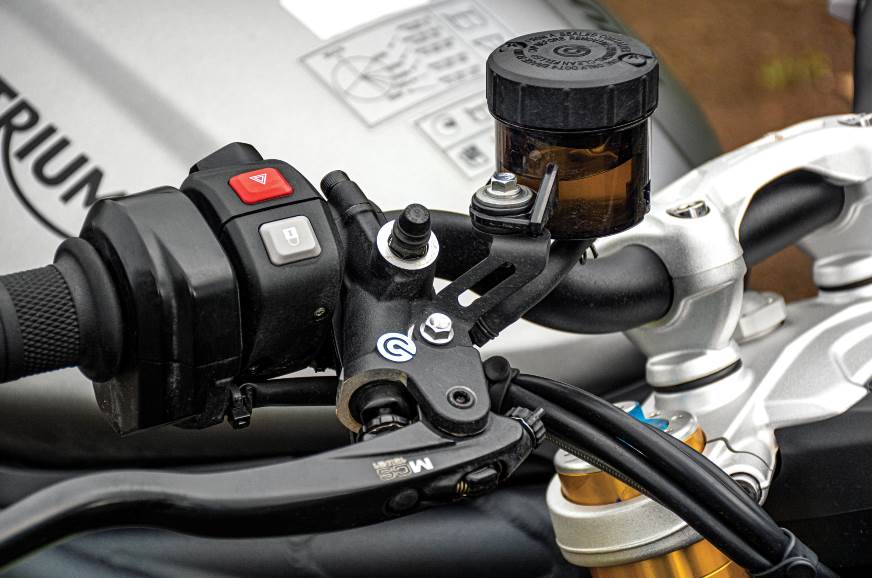 In the much denser traffic of Mumbai, I learned that the Speed isn’t exactly ideal. The heavy and bitey clutch is a pain in stop-go traffic, and the bar-end mirrors, gorgeous as they are, limit your filtering capabilities. It also gets quite hot, as you’d expect from such a powerful motor. However,

the bigger issue is the radiator’s central portion becoming clogged with mud thrown up from wet roads, due the front mudguard being too short. Another shortcoming on the average Indian road is the firm suspension set-up, which though not outright harsh or jarring, feels uncomfortable over anything less than perfect surfaces.

When that perfect surface is shaped like a corner, though, you’re in for a treat. Because once the fully-adjustable Ohlins suspension is dialled-in just right, this bike is an absolute riot in the bends, striking a great balance between poise and agility. Turn-in is quick but not unnervingly so, mid-corner stability is absolutely superb, and the bike feels communicative. With high pegs and a low handlebar, the Speed shows you its performance-focused intent, and places you in a pretty sporty position – one that feels equally natural slicing through moving traffic and attacking corners head-on.

Rounding out the package is the exquisite attention to detail that’s apparent all over this new Speed Triple. Everything has a very solid feel to it, but bits like the lovely bar-end mirrors, stunning tail-lamp, beefy top triple-clamp, and single-sided swingarm really make this bike feel rather special. All this mirrors the work that’s been done under the surface to add a massive 30hp, while simultaneously shaving off an impressive 10kg over the old Speed Triple 1050. With all the quality, technology and performance this bike offers, the Rs 16.95 lakh price tag (ex-showroom) really seems rather fair. 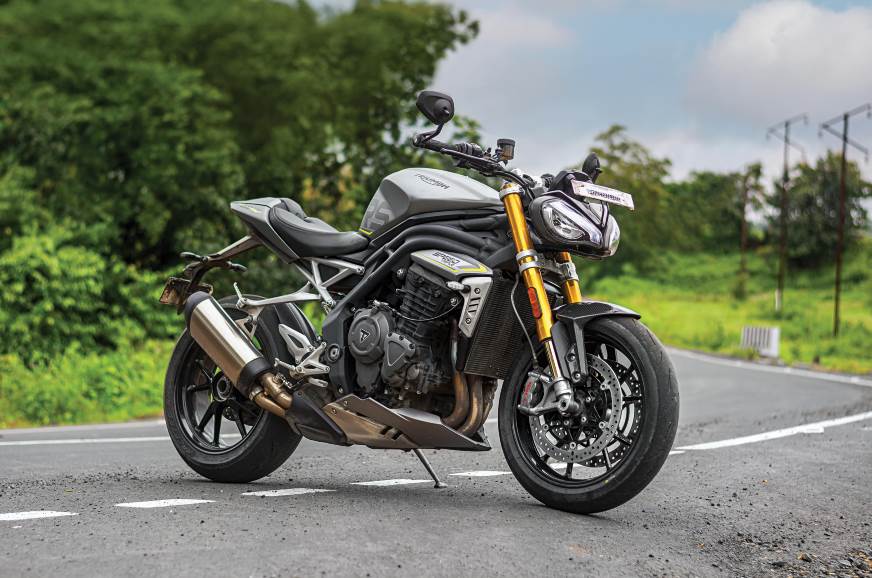 There’s a lot to like about the Triumph Speed Triple. The brutish looks, life-altering performance, the music from its tailpipes and typically solid Triumph build quality, all make a strong case (though we did have a few electrical gremlins). The rest of the bike doesn’t necessarily make a whole lot of logical sense, though. It isn’t an ideal city bike, and because Triumph hasn’t bothered with so much as an ornamental flyscreen, highway touring isn’t easy either. But it will be an absolute riot on the racetrack and on spirited weekend rides, while offering greater levels of everyday usability and comfort than a full-blown superbike. At the end of the day, it’s a heart-over-mind bike that packs a whole lot of fun, performance and feel-good factor into a rather reasonable price tag. It also perfectly fits the streetfighter bill, which it itself created back in 1994, but with elevated levels of approachability.