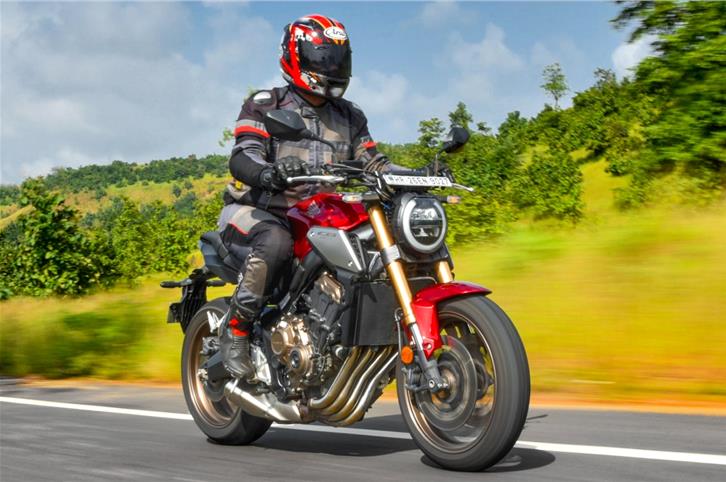 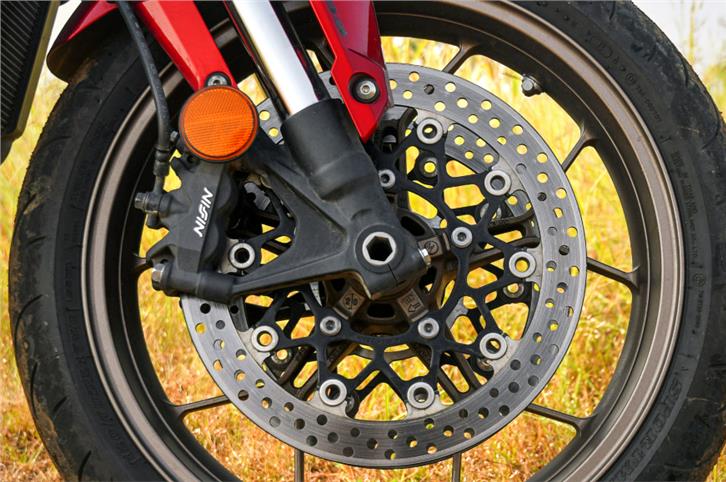 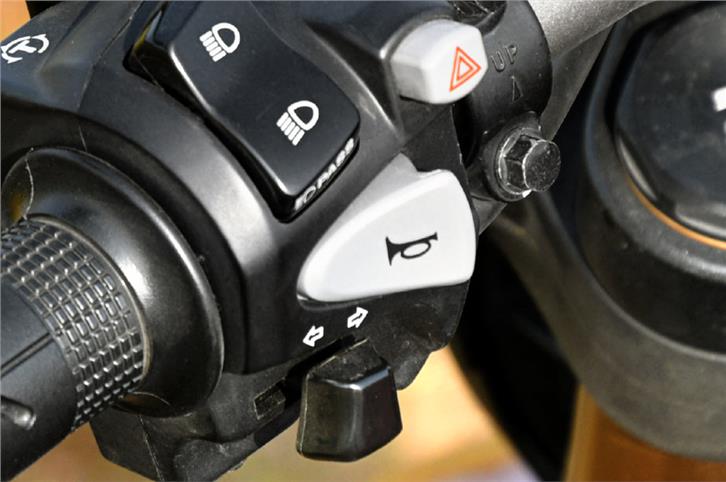 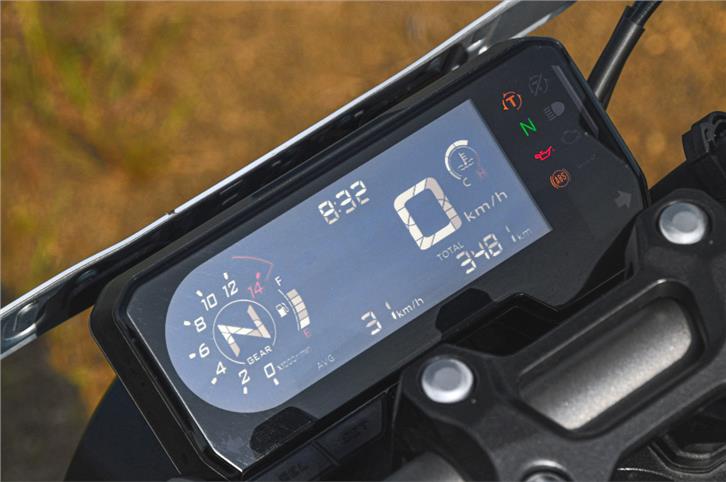 LCD dash is neat, but dated in today’s TFT times.

Honda’s 650cc naked has most of the right ingredients to be a great first multi-cylinder motorcycle.

Can you imagine the dilema one faces while buying their first big bike? Especially, when the heart and mind are at loggerheads over a particular choice. The Honda CB650R, for instance, ticks almost every box for someone stepping up from a small displacement motorcycle. Looks, performance, screaming inline-four engine from a Japanese superpower. It has it all. However, the CB650R's eye watering, Rs 8.67 lakh price tag has been the cause of much debate among motorcycle enthusiasts. Should one really spend that kind of money on a 650cc bike?

That question hung in the air as I gazed at the CB650R parked in the office. And my word did I fall in love with the way it looks, right then and there. Honda's 'Neo Sports Cafe' design language lends itself beautifully to this motorcycle, like the rest of the modern day Honda CBs. 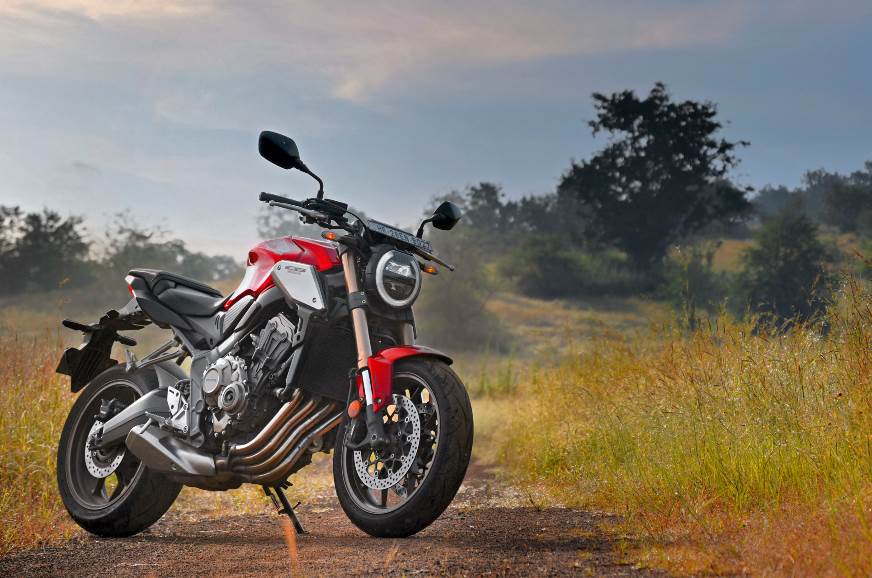 The round LED headlight, bronze Y-spoke alloys and chiseled 15.4-litre fuel tank are design elements that grab attention. Our test bike's glittery Candy Chromosphere paint scheme looks fetching and contrasts well with the silver tank extensions that cover the air-intake ducts. Although, they did look like odd add-ons when viewed from the saddle.

The blacked-out tail section is the only bit about the design that I found bland, despite the silver number plate hanger and fat 180-section tyre's attempt at livening up the appearance.

All said, the real beauty of a street naked motorcycle is in the exposed bits. Here's where the frame, engine with the bronze head cover and side-casings as well as the four symmetrically aligned exhaust header pipes add to the visual drama. The CB650R is a looker in every aspect and I'm confident the design will age gracefully with time.

That lovely design hasn't come in the way of functionality and ergonomics. The split seats are wide and comfortable while the rearset footpegs and flat handlebar puts you in a sporty position. The tank isn't too wide, despite there being an inline-four engine underneath, so your legs aren't uncomfortably splayed. Short city rides or long highway trips, hence, won't be a problem on this motorcycle. The only bit you'll have to contend with is head on wind at high speeds - a norm on pretty much all naked bikes. 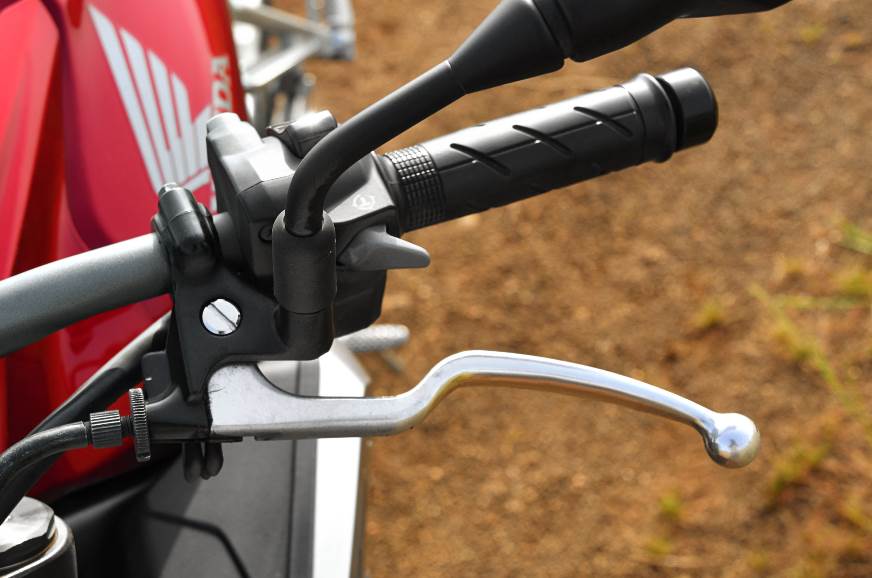 What can be an ergonomic issue, at least till you get used to it, is the placement of the horn switch. For some reason Honda has located it where you'd conventionally find the turn indicator switch and you inadvertently become the annoying, honking road user when all you're trying to do is indicate! That aside, the compact yet neatly executed reverse LCD display packs enough information but is simply outdated on a middleweight motorcycle in 2021. But, as far as quality levels are concerned, the bike feels premium in every sense of the word.

The proverbial ace up the CB650R's sleeve is its inline-four engine. It is the only motorcycle in this displacement class to feature such a layout and it's India's favourite engine format when it comes to sportbikes. Personally, I've always loved inline-fours for their peaky power and addictive sound. This particular engine doesn't disappoint either.

Fire it up and you're greeted with a smooth hum. At low speeds it's almost silent, and given its tractability, holding 40kph in 6th gear is effortless. That said, rev the engine hard and it feels buzzy around the tank and seats between from. 6,000rpm onwards. It's uncharacteristic of a 'Honda' engine but it isn't bothersome in any way. In fact. I'd turn a blind eye to that because past that point, this engine truly comes into its own.

Power comes rushing in with force between 8,000 to 12,000rpm, the speeds rise rapidly and the sound from the exhaust gets addictively louder. There's a sense of enjoyment in revving this engine to the redline and it almost seems like it has taken on a different personality- one that's alive and full of energy. I'd go as far as saying that this engine has a lot more character than the rather clinical Honda CBR650F of the past. 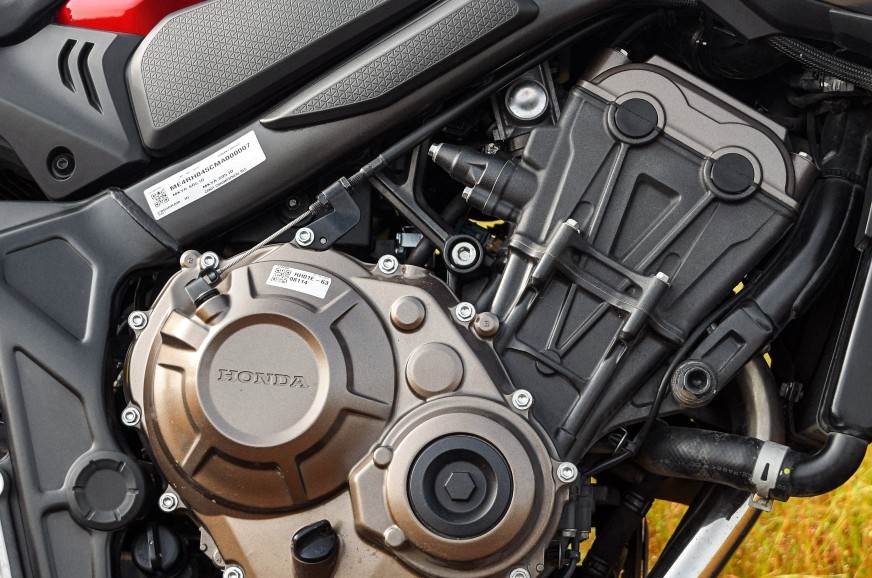 In fact, with 86hp and 57.5Nm, the performance on offer is engaging enough for a 206kg motorcycle, despite the engine being slightly detuned for our fuel quality and riding conditions.

Complementing this sweet engine is the slick and precise six-speed gearbox. It is a joy to operate, with the slipper clutch working perfectly in sync during hard downshifts. The clutch lever action is light as well, making easy work of dealing with dense city traffic.

All being said, the bike doesn't have ride-by-wire and hence there are no ride modes either. Nevertheless, the linear power delivery makes it easy to manage riding this motorcycle.

One of big changes that Honda made to its 650 line up with this iteration is the introduction of a non-adjustable Showa SFF-BP or Separate Function Fork- Big Piston. The advantage lies in better bump absorption and more feel from the front end.

Riding over undulations and pothole riddled streets, we found the suspension does a fairly good job of isolating them, although the ride is firm. On the flipside, the bike is easy to flick through a set of corners and remains planted throughout. First-time big bike riders  will find the CB's forgiving handling quite endearing.

But as you gain experience and begin to push hard, the Dunlop Sportmax tyres hinder your ability to explore the full handling potential of the bike. The rear, especially, tends to move while fully leaned over and that's a bit unnerving. Thankfully, there's a switchable traction control system that works well to keep things in check. 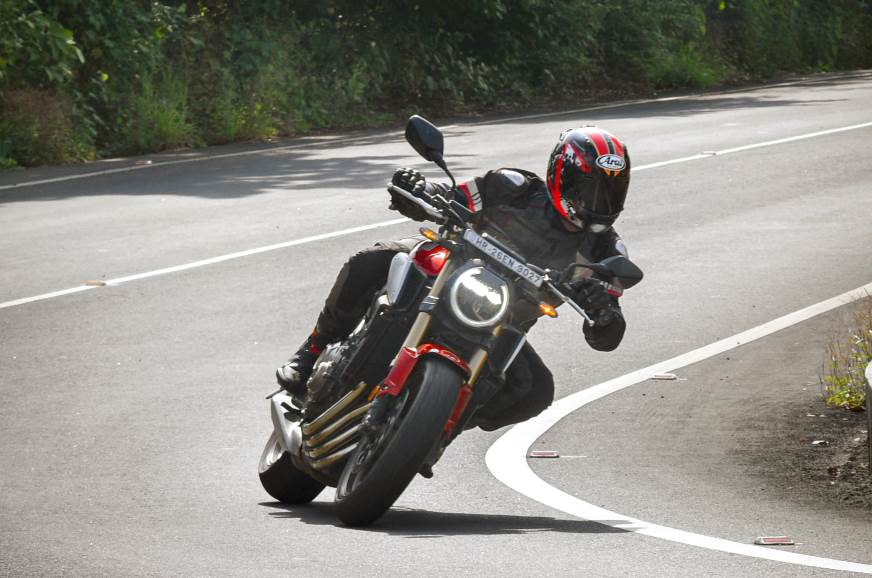 The Nissin brakes deserve special mention for their sharp initial bite and ability to haul the bike down to a stop from triple digit speeds, without any drama. I also liked the Emergency Stop Signal system that activates the hazard lights when the rider applies the brakes suddenly, say to avoid an obstacle on the road.

The more time we spent riding the Honda CB650R the more we liked it. It’s quite an enjoyable motorcycle and as said before, it is a fantastic upgrade from a200-400cc motorcycle. It may be lacking in the features department but the riding experience makes up for it. However, for all its virtues, the price tag still cannot be justified  even after you consider Honda's low cost of ownership for its big bikes. 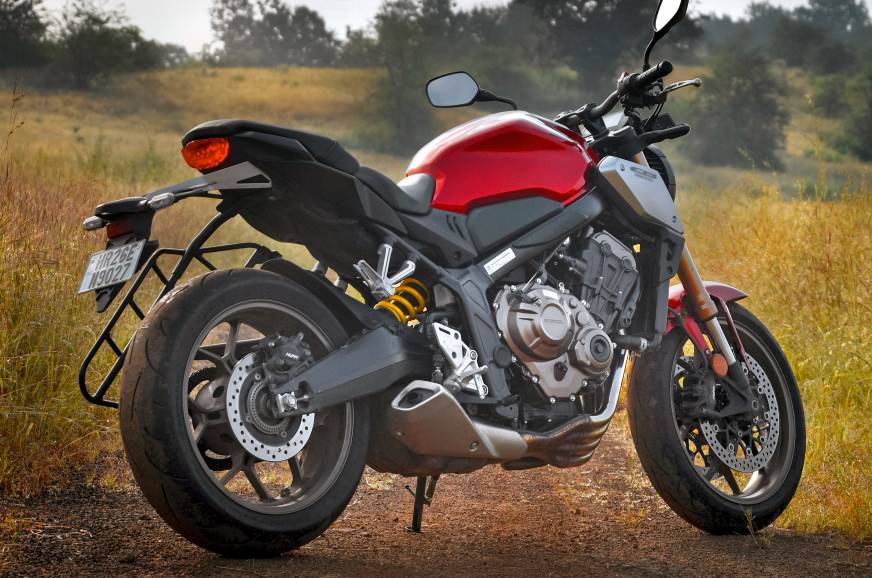 For perspective's sake, the Triumph Trident 660 is the CB's direct competition and it's over Rs 1.5 lakh cheaper, while the price difference between the same two bikes in the UK is currently just Rs 5,000. While the Triumph is due for a sizable price hike early next year it is still unlikely to fall in the vicinity of the CB's astronomical asking price. In fact, even the more powerful and feature packed Kawasaki Z900 is priced lower than the CB650R, at Rs 8.42 lakh. And the Triumph Street Triple R isn't too far away either, at Rs 9.15 lakh.

Which begs the question, why would you spend so much money on the CB650R? While the motorcycle is extremely likeable, you'll have to be a Honda fan who doesn't place value as a high priority to put down the money. If that's the case, it'll certainly be a story of the heart winning over the head, but also one you won't regret.