Ducati drops the numerical suffix from the name along with the iconic trellis frame. The new Ducati Monster is a very different bike from the one it replaces.

Times change, and we’ve got to change too, whether we like it or not. After nearly three decades of following a much-loved formula, Ducati felt that it was time to change its best seller in a way like never before. The new Ducati Monster brings in massive changes that promise to make this a better bike to ride, but when the first images came out late last year, the reactions were, umm, mixed.

Let’s set the context. The Monster is probably the most important motorcycle Ducati has ever made. When it was launched in 1993, it helped the company survive tough financial times and now, almost 30 years later, it’s the brand’s bestseller, with over 3.5 lakh units sold.

The original Monster formula was rather straightforward. Use the chassis out of the existing Ducati superbikes of the time, throw in a simpler air-cooled L-twin and wrap it up in muscular, yet achingly stylish Italian bodywork. Twenty-nine years later, it's no surprise that Monster fans have grown rather attached to seeing that iconic red tubular frame underneath the fuel tank, so when the new one came out with its aluminum front-frame chassis, the internet predictably erupted in cries of ‘sacrilege’!

Is it though? Remember, the Monster was a street bike that used the chassis out of the superbike of the time. In those days, that would have been a trellis frame, but today’s Ducati superbikes have moved to far more modern things. If the range topping Panigale now has an aluminium front frame, shouldn’t the Monster too? 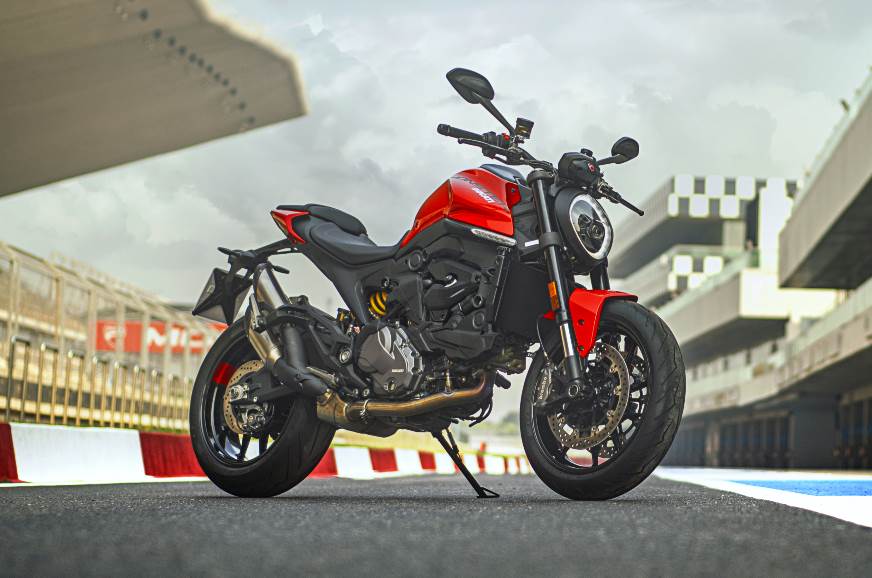 I have no issue with the missing trellis frame, but there’s no hiding from the fact that the Monster is now a considerably smaller bike than the one it replaces. The older Monsters were typically the biggest and most muscular bikes in their segment, but that no longer holds true. The dramatic weight loss brings many, many benefits that we’ll get to soon, but it also means that the new Monster isn’t as much of an attention grabber. That being said, it’s still got some clean and pretty lines, especially in the tail section and with those big upswept exhausts. And as with all unfaired Ducatis, the Monster would prefer that you view it from the right, rather than the left, where you’ll see all the necessary plumbing and wiring for the powerplant.

On the plus side, it still feels like a really premium motorcycle, as you'd expect from a Ducati. The quality and attention to detail is fantastic for this segment, with things like the Brembo radial master cylinders for the front brake and the clutch, a beautiful set of mirrors, Audi-style scrolling indicators and a Panigale V4-inspired TFT display. It all feels expensive and quite special.

While there have been some powerful and highly specced Monsters in the past – like the 1200 R from 2016 – this motorcycle has always been a street bike at heart. However, Ducati is so confident in the Monster’s new found abilities that they brought us to the Buddh International F1 Circuit to try it out. And that's because the new Monster is a very different experience to the bike it replaces. That new frame, a smaller fuel tank (now 14 litres vs 16.5 litres), a lighter subframe and weight savings within the engine have all helped make the Monster an incredible 18 kilos lighter than before. At 188kg, it’s kerb weight is now right on par with the lightest bikes in the segment. Pair that with a set of Brembo M4.32 brakes – just like you get on the Panigale V2 – as well as Pirelli Diablo Rosso 3 tyres and you have a bike that is quite eager to play.

The previous Monsters were big, relatively heavy steering bikes and they needed a bit of manhandling to get the best out of them. The new Monster is something else and the vast difference is evident in the first few metres of riding the bike. The Monster feels dramatically lighter on its feet, the top-heaviness has pretty much gone and it’s generally just easier to manoeuvre. The fact that it has seven degrees of additional steering lock available will make life on the street easier as well.

The new chassis brings in a slightly sharper steering angle and the wheelbase is now a little shorter as well. Out on BIC, the Monster displayed a new level of agility and willingness to corner, but without sacrificing the sort of confidence and stability you’d expect.

Neither the tyres nor the brakes are segment leading, but both are impressive and they did an admirable job on the BIC. The Monster gets a non adjustable front fork and a preload adjustable rear shock and both are set up quite well, but to an extent. Once you start to push hard enough at track speeds, you will eventually wish for more suspension control. It's at this point that Monster’s road bias starts to show and you’ll also eventually be held back by the scraping footpegs. Mainly though, the riding position feels a little restrictive for the track with the footpeg position and wide handlebar making it awkward to move your body from corner to corner.

Then again, that’s hardly a significant issue for a bike like this. What you will find is that you sit low and ‘in’ the bike, the footpegs feel rather high up and you get a very wide handlebar. This is a typical Ducati Monster riding position, and even though the seat height has gone up by 10mm to 820mm, the bike feels much slimmer and more manageable – I think shorter riders will like that.

Performance wise, the new Monster now gets the familiar 937cc, liquid-cooled L-twin motor from bikes like the Multistrada 950, the SuperSport and the Hypermotard. While there are some small gains in the power figures over the previous Monster 821, the big difference comes in a much meatier and more broadly spread torque curve.

The engine also gets plenty of reworked internals that actually make it lighter than the smaller motor in the 821. Like all Ducati L-twins, this one is cranky below 2,000rpm and sounds crude at low speeds, but it produces an enjoyable deep bark as you pick up the pace. It’ll also probably sound pretty awesome with an aftermarket exhaust.

We only got to ride on the short loop at the BIC, where you never get to experience more than third and fourth gears. Nevertheless, the motor is all about that solid midrange punch. It’s also happy to rev and the throttle response was very nice.

We still need to see what its road manners will be like, how hot it will get and how heavy the clutch will feel, etcetera, but what's clear right now is that the Monster has a superb set of electronics.

The electronics assists available here are the best I've experienced in this segment, and that’s not in terms of how many options you have, but also in how smoothly it all operates. To list it out, you get three fully customisable riding modes, two power levels, eight levels of traction control, three levels of cornering ABS, wheelie control, launch control and a bi-directional quick shifter. All of this is standard on the base model that’s priced at Rs 10.99 lakh, ex-showroom. There’s also a Monster Plus model that gets a rear seat cowl and a small fly screen for Rs 11.24 lakh. Overall, that positions the Monster above the likes of the Kawasaki Z900 and Triumph Street Triple R, but on par with the BMW F900R and the ever-impressive Triumph Street Triple RS.

The Ducati Monster has always carried a premium price, but it used to be the style and image that were among the biggest draws for the old model. That may no longer be the case with the new bike, but it now proves to be a more tempting motorcycle in other, more substantial ways.

However, if you’re willing to adapt to change, you'll recognise that the sacrifices made in the bulk and visual drama of the old bike have made the new one far more rewarding to ride.

It's definitely not a track-focused naked, like the Triumph Street Triple RS, but riding it here at the BIC has made it clear what a big step forward Ducati has made with how dynamic and easy this new Monster is to ride, not to mention genuinely good fun.

Should this bike be at the top of your middleweight naked wishlist? Well, it definitely deserves to be on it, but that’s something we can only answer when we get to experience how these improvements translate to the public road, because effectively that's where the Ducati Monster was born to excel.