One of the best helmets in the world, with a price tag to match. 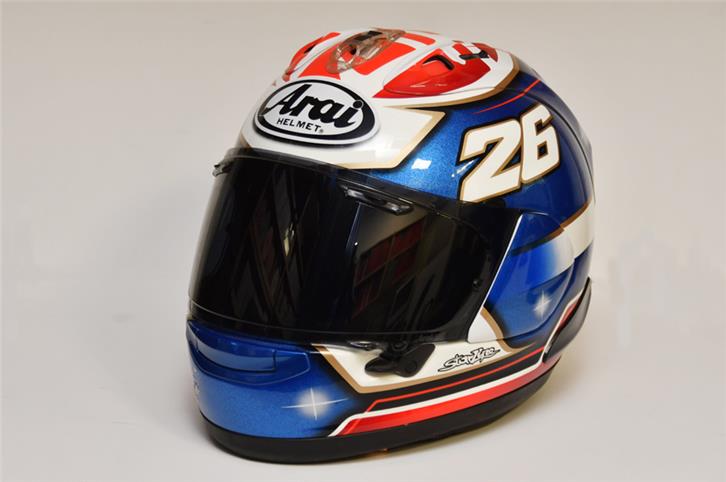 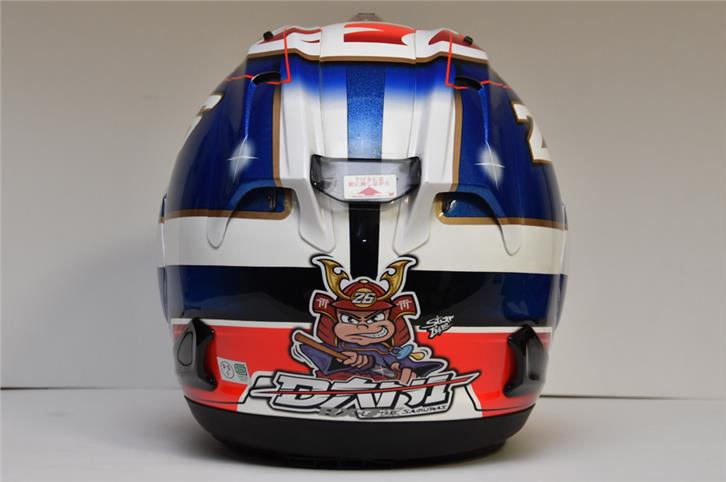 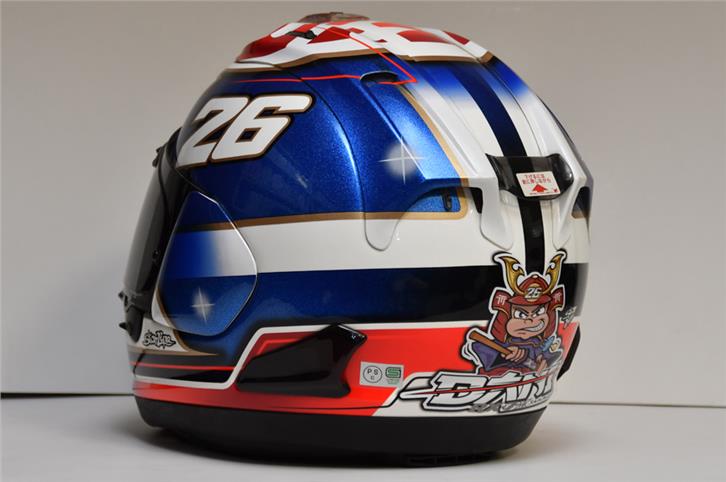 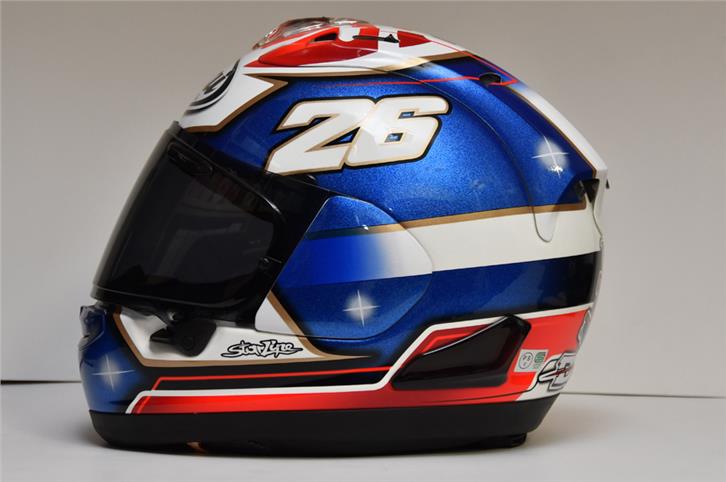 Japanese manufacturer Arai is one of the most recognized and revered names in the world of helmets and this is their top model. The RX-7 is the very same helmet worn by numerous MotoGP stars and this one is in the colours of Repsol Honda star Dani Pedrosa. Let’s break it down.

Arai strongly believes that a helmet, no matter how good it is, cannot fully absorb the impact of a direct high-speed impact. Instead, a helmet’s ability to protect you is equally defined by how well it can glance off an object on impact. This is why Arai tries to make its hand-built helmets as smooth and round as possible, using what it calls the R75 shape where the shell incorporates a continuous curve radius of at least 75mm. All the external plastic spoilers and vents are designed to break off under heavy impact to keep the helmet as round as possible, giving it a better chance at glancing off.

The RX-7 is built using Arai’s proprietary resin and super-fibre materials in a construction the company calls the Peripherally Belted Structural Net Composite. Each helmet takes 27 steps and 18 man hours to build and it goes through five quality control stages along the way. The company sets such a high standard for itself that it tests its helmets over and above the tests mandated by external testing agencies like DOT, ECE, SNELL and Sharp. 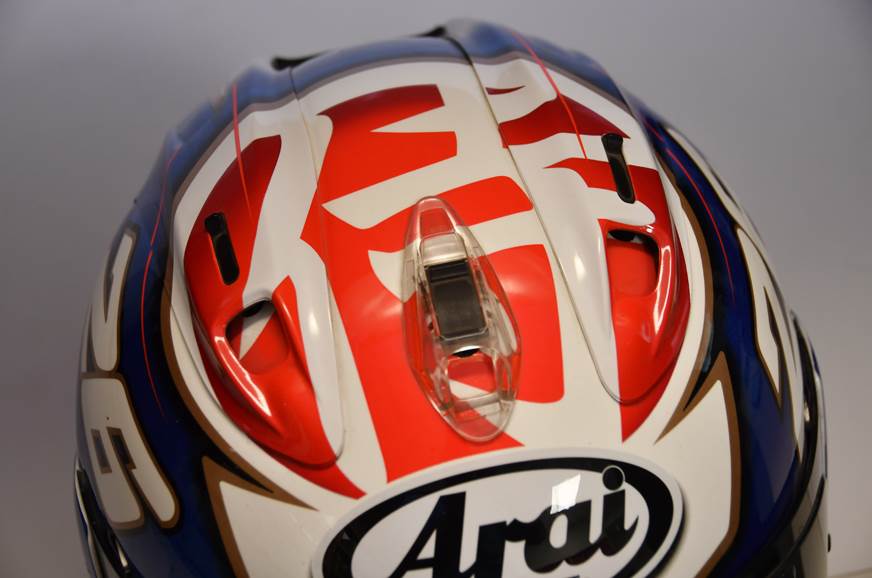 This is a beautifully premium product and quality is excellent. The paint is thick and lustrous and a metal flake effect makes this loud graphic scheme look far more captivating in the flesh. If you’d prefer something else, there are dozens of graphic schemes available, and given Arai’s rich heritage, some lovely rider replicas too. These include the likes of Kenny Roberts, Freddie Spencer, Mick Doohan, Maverick Vinales, Randy Mamola and many, many more. Solid colours are also available at a lower price. Arai stresses that these are not mere visual replicas, but are exactly the same helmets worn by today’s top racers.

Arai avoids the usual recessed visor mechanisms as it sees them as a weak point in the shell, since the shell has to be thinner at that point. Instead, the company offers removable flaps that provide access to the visor removal mechanism. These are more tedious to use than the typical external visor mechanism and they tend to produce more wind noise too, but as with all things Arai, safety comes first. The two-step visor-lock mechanism also deserves mention and it is derived from Arai’s Formula 1 helmets. The dark visor you see here is sold as an optional accessory and the helmet ships with a clear visor as well as a Pinlock anti-fog insert in the box. 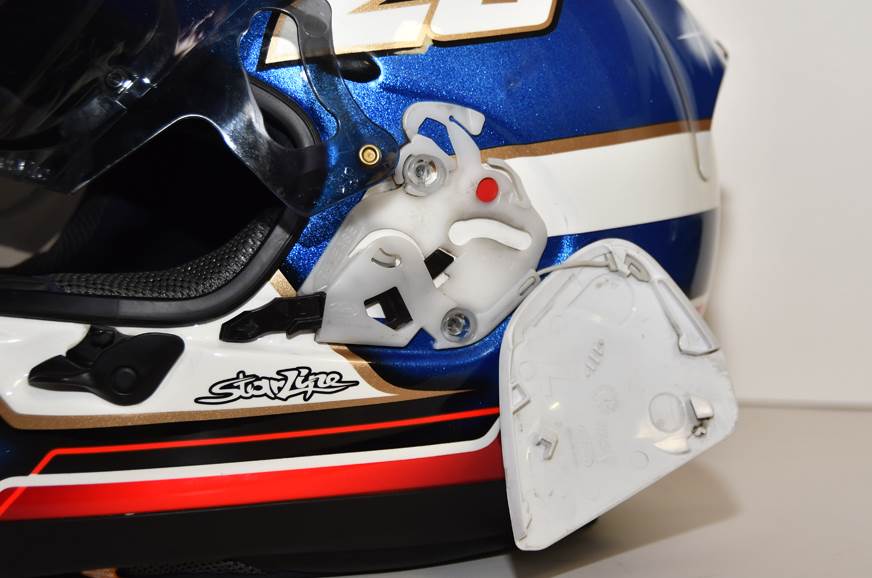 Under the high-tech external shell lies another pioneering technology, a multiple density liner. This has enabled the company to engineer five different density zones within the single EPS liner, each offering the ideal level of absorptive protection at different areas of the helmet. Some areas of the liner are soft enough to compress with your finger, while others are surprisingly hard.

The comfort liner is made from a soft and plush anti-microbial material. With the last RX-7 update, Arai gave in to customer requests and it now provides removable speaker pockets for those who like to use Bluetooth communicators. Fit is quite adjustable - the position of the temple area and cheek pads can be fine-tuned by 5mm ‘peel away’ foam pads. 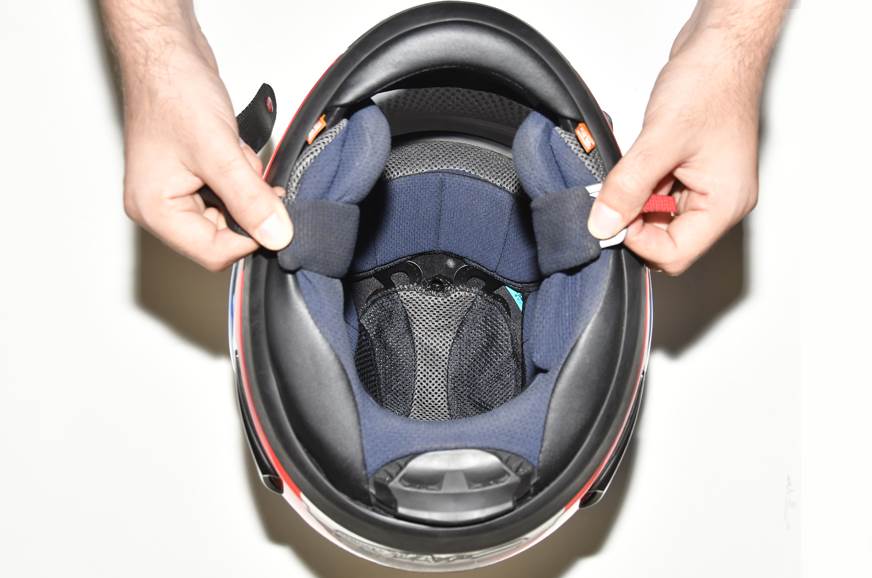 Arai also pioneered the emergency release system in helmets (something many other helmets now offer, too) and the RX-7 gets two small pull-tabs on either side that release the cheek pads, allowing emergency workers to carefully remove the helmet in case of a crash. 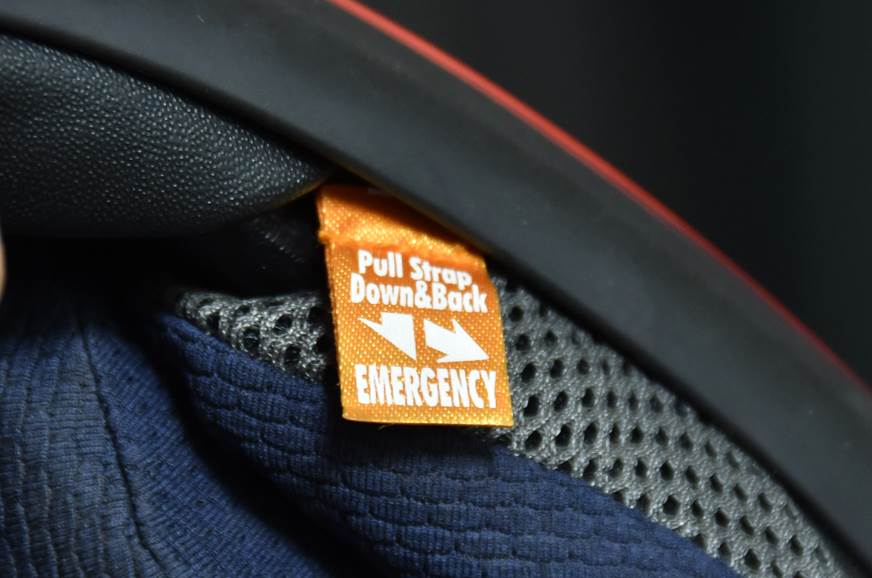 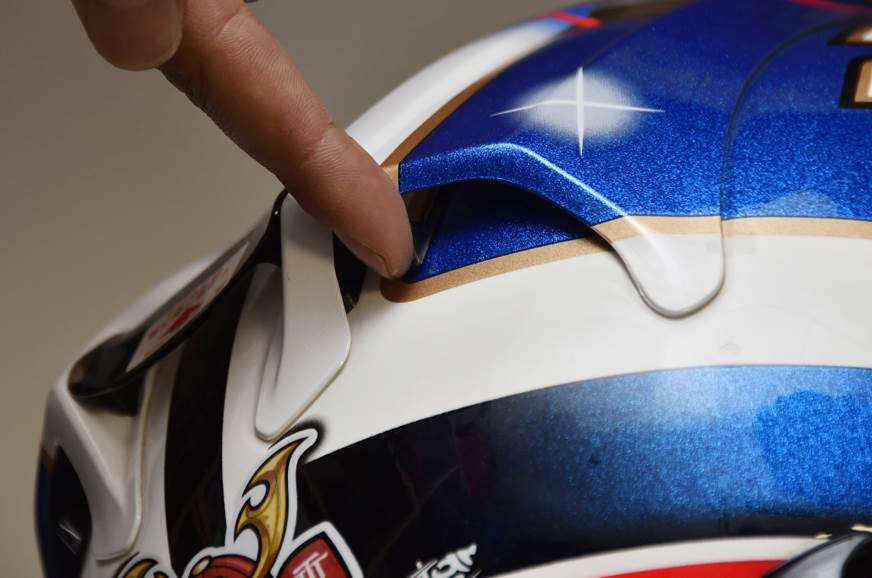 Exhuast vents at the back can be closed if desired.

The RX-7 also comes with a small, patent-pending spoiler at the back that adjusts in 4 steps. I suppose this will help aid stability at extreme speeds on the racetrack, but I haven’t had enough time in these conditions to experience it. With so many vents, air flow is quite impressive on the go. Wind noise is a usual by-product of heavy venting, but it’s been kept under control. While this isn’t the most quiet helmet out there, it’s not uncomfortably loud either. 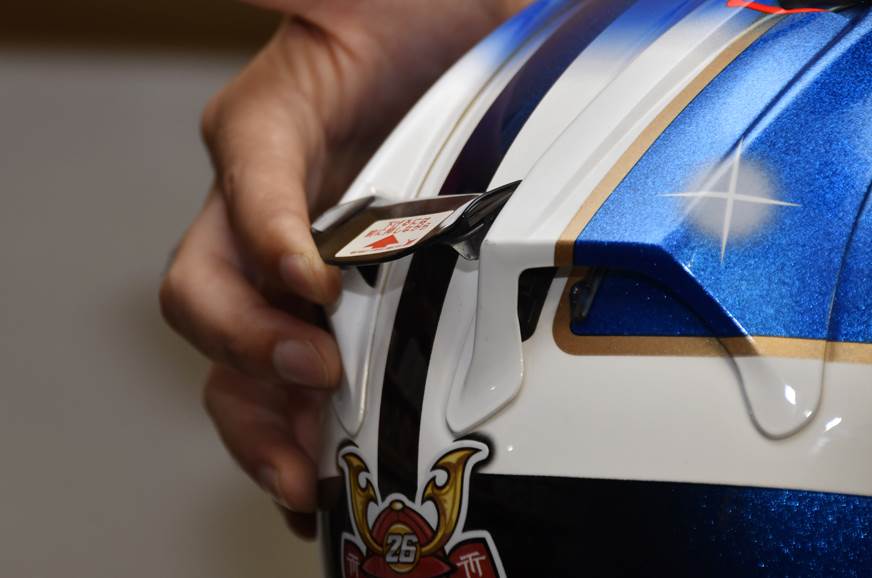 Fit is a crucial part of buying an Arai and in my experience, each model fits slightly differently. Further, shell shapes vary from market to market so as to better match the average head shape of that region. My helmet came from Japan, which is why it is called the RX-7X and it fits slightly differently to the American spec version known as the Corsair X or the Euro-spec RX-7V. Aside from the minor differences in fit, the RX-7X is more or less the same as the RX-7V that's also sold in India. Nevertheless, it is therefore, vital that you try before you buy.

One thing that is immediately apparent when you wear the helmet is the weight distribution and the way it fits with a wonderfully balanced feel. This is great because Arais are not the lightest helmets in the class, but this sense of balance means that the weight is something I’ve never noticed. 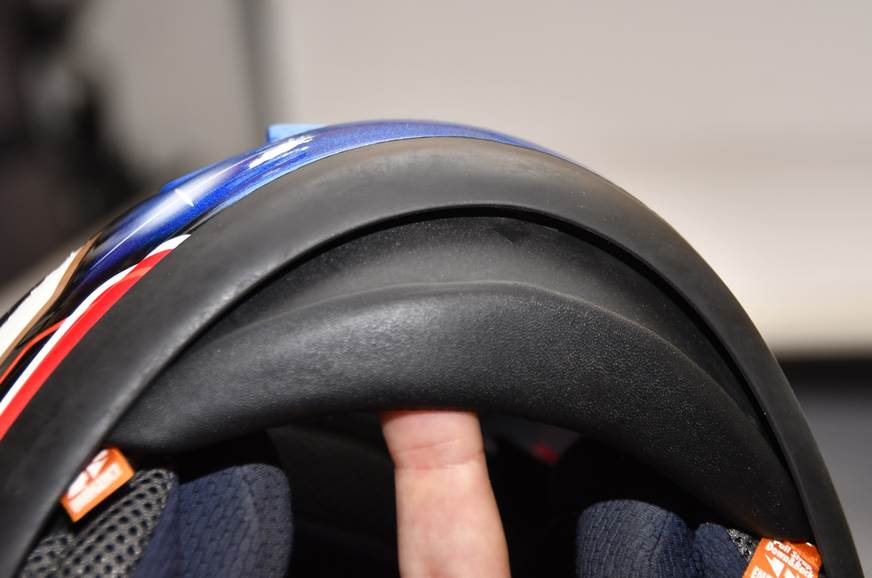 Also worth mentioning is that this is a race helmet and it is designed such that the vision and ventilation works best in a full race-crouch with the helmet tilted upwards. If you’re not a supersport rider or racetrack regular, other models like the Chaser-X, QV Pro, Rebel, or Axces-III have been designed with a more upright riding position in mind, and will function better for pure street use.

It’s not a tall order to say that this is one of the best forms of protection you can give your head on a motorcycle. It really doesn’t get much better than this and that means you have to pay a price. Brace yourself, because the Arai RX-7V costs Rs 75,000 in India. Obviously, this is a huge amount of money and there are more affordable helmets that can also offer high levels of protection.

Ultimately, when it comes to buying a top tier helmet, it’s hard to objectively say that one is better than the other, so it boils down to which particular manufacturer you want to invest your faith in. Personally, I am convinced by the Arai philosophy and the company’s incredibly deep, almost stubborn commitment to provide the highest safety possible with no compromises in the name of form of features or form on the whole. That’s why I believe this the best protection I can give myself and that’s why the price is a pill that I’m willing to swallow. 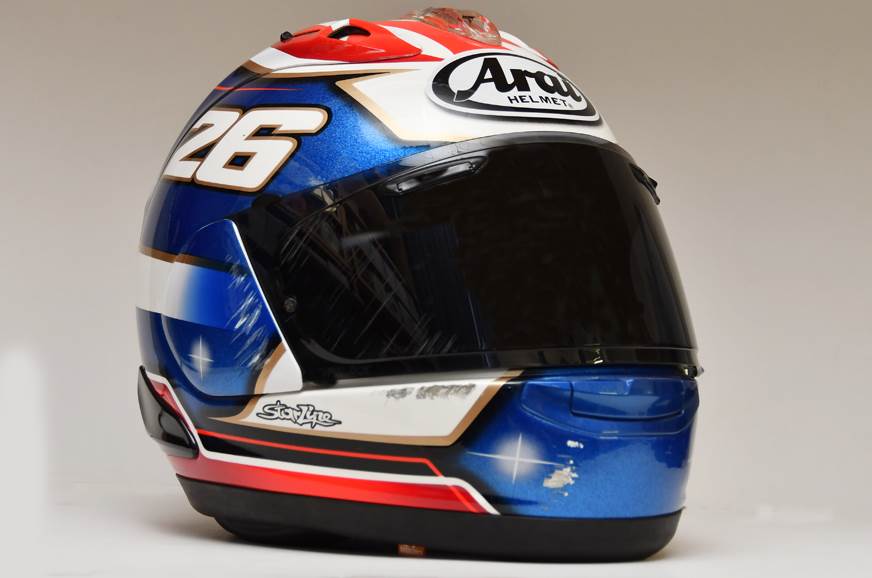 A crash at the race track damaged the shell around the jaw, which means this helmet had to be retired. It served me well!

Unfortunately, this is one of those product reviews where we take the testing a little too seriously. This particular helmet you see here was involved in a crash at the race track earlier this year and while the damage may look fairly minor, Arai examined it and recommended that I no longer use the helmet as the shell has visible damage. Thankfully, I escaped free from injury and the helmet performed flawlessly. Ultimately, that’s all that matters.