It may look like an ADV, but make no mistake, the S 1000 XR is a 1,000cc sport bike with a comfortable riding position. 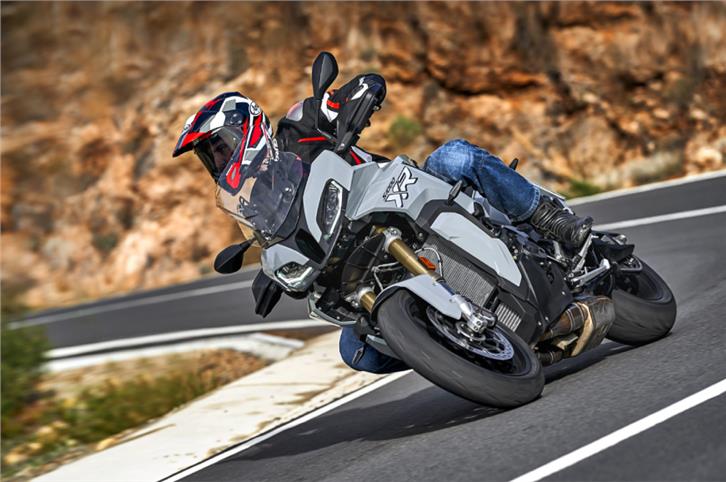 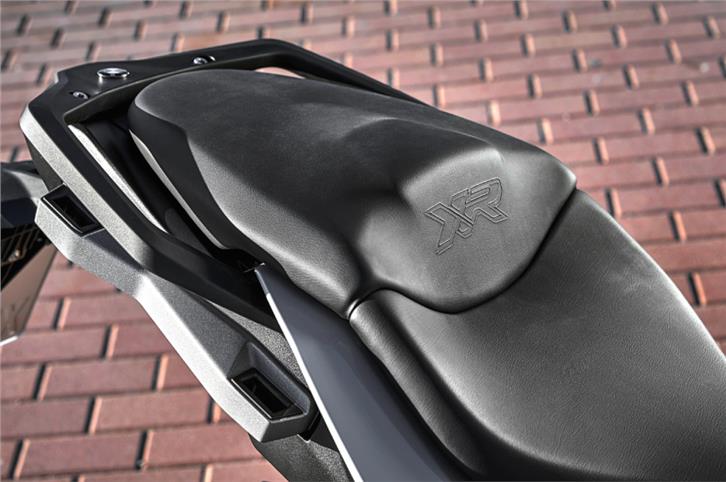 Seating comfort has been a big priority. 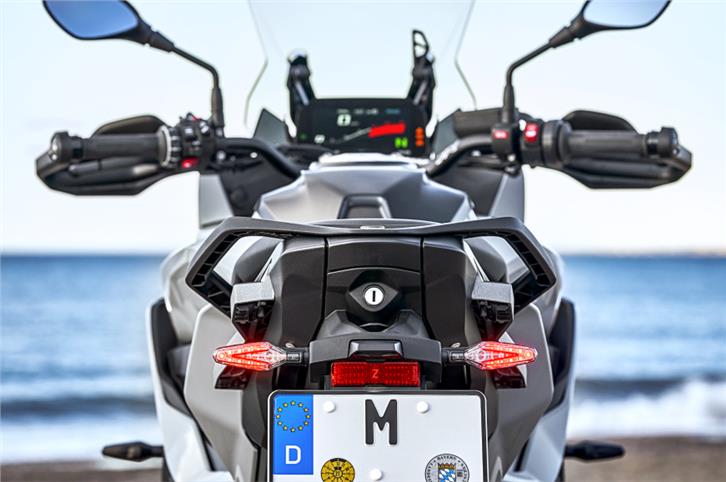 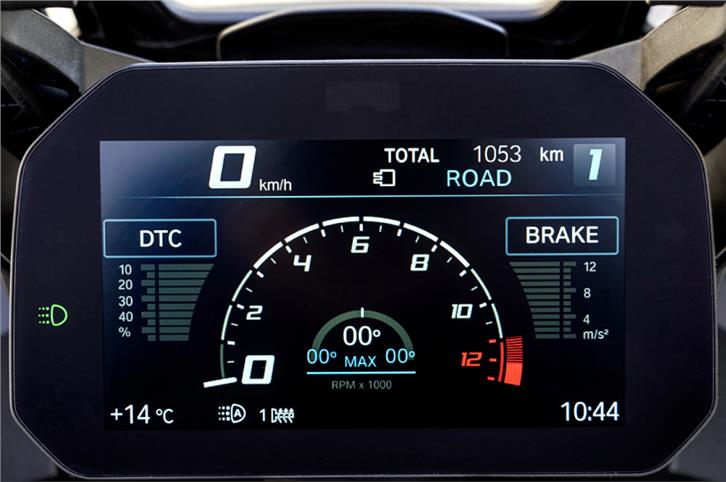 A couple of months ago, we got to ride three new BMWs in Spain. You read about two of them – the F 900 R and the F 900 XR – in our March 2020 issue, and an embargo meant that we couldn’t talk about this bike back then. What you’re looking at here is a brand-new, second generation of the fastest sport-touring machine from BMW. And yes, that’s what we’re calling it, despite the fact that BMW terms the S 1000 XR an ‘Adventure-Sport’ and lists it under the ‘Adventure’ category on its website. Truth be told, with 17-inch rims and just 150mm of suspension travel, it only qualifies as adventure bike thanks to it being a tall thing with good wind protection. In fact, at one point along the ride, a BMW official told me that they’d recommend taking this bike about as far off-road as you would an S 1000 R litre-naked. Or in other words, not very far at all. 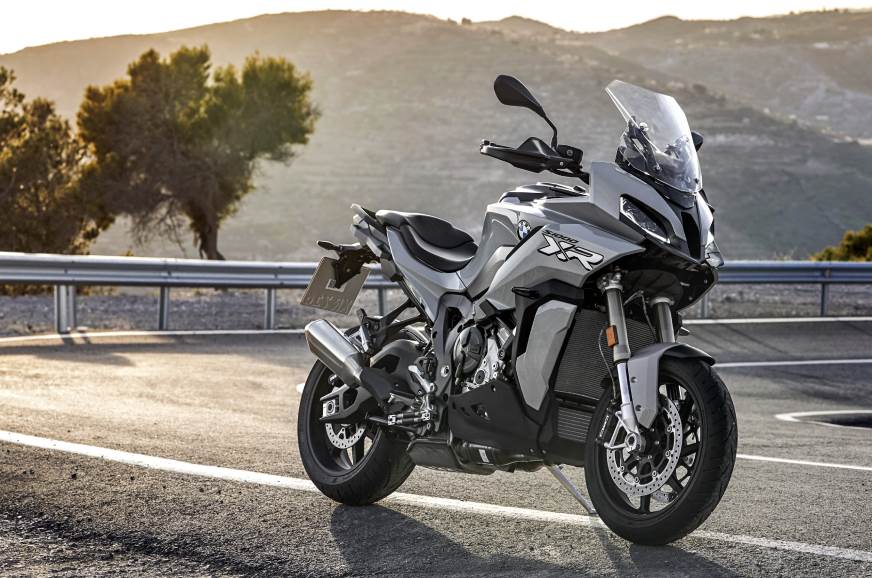 New from the outside

This is no crisis because the S 1000 XR has always been about covering big distances at silly speeds while offering complete comfort to you and your pillion. That brief hasn’t changed for the 2020 model; but BMW has redesigned it from the ground up. The design is completely new, and this is the second bike, after the new S 1000 RR, that confirms the bike maker’s intention to leave behind its trademark asymmetric face design. I quite like the look of the new LED lights, and even though we didn’t get to experience them, an indoor simulation revealed that their clever cornering function should be quite a joy on a poorly lit road. Above the headlight sits a twostep height-adjustable windscreen that does a wonderful job of insulating you from the wind blast, and along with the built-in heated grips, the BMW shielded me beautifully from a biting cold Spanish morning. 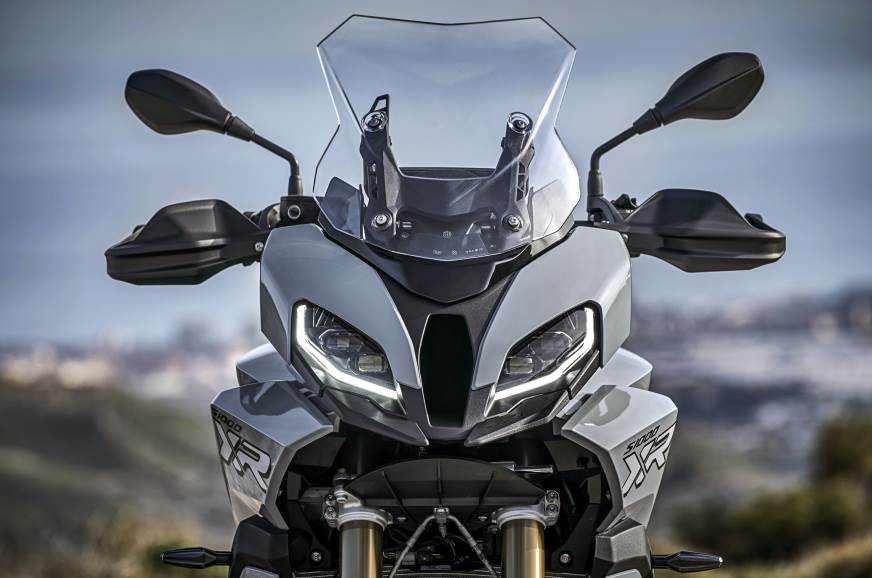 Sleeker, full-LED headlamps on the new XR have a cornering function.

The bodywork is brand-new as well, and it looks larger and more bulked-up in general, despite the rather drab Ice Grey colour scheme our test bikes came with. The bodywork shields your lower body from the elements well, and I like some of the smaller touches like the built-in cubby just behind the keyless start button. BMW has now integrated pannier mounts into the design and the higher-spec TE variant gets a luggage rack as well. However, while it’s all put together very well, you can’t help notice that there is almost no metal on display at all; and everything you see on the expansive bodywork is plastic. This might just be me, but some exposed metal, at least in areas like the fuel tank, always makes things feel a little more premium.

What is a commendable is that BMW has managed to make this bike a little friendlier for shorter riders. Seat height remains unchanged at 840mm, but the seat has been slimmed down quite a bit where it meets the fuel tank, making it a little easier to get the feet down. Climb aboard, and you’ll find that the bike feels big, but not frighteningly heavy. BMW says they’ve saved 10kg of weight, but the spec sheet shows a 226kg kerb weight, which is only 2kg down from the old bike. No, BMW isn’t pulling a fast one here; they’ve reached this figure by accounting for all the kit like the pannier mounts and luggage rack which are now standard, but used to be popular options that most owners ended up installing.

The XR’s engine has been heavily reworked, and is now based on the motor from the new S 1000 RR. You wouldn’t guess that from the spec sheet because it has the same cubic capacity, the same bore-stroke ratio, and even makes the same 165hp and 114Nm of torque as before. Then again, this motor is now Euro 5-compliant, so it’s a good thing that BMW has managed to keep the performance figures from dropping. What came as a disappointment to many was that the XR misses out on the ShiftCam variable-valve control technology from the new S 1000 RR. BMW says that ShiftCam is mainly intended to enhance the RR’s top-end performance and that this was not a priority for the road-biased XR. This is a fair explanation, but the cost-saving benefits can’t be discounted either.

Nevertheless, BMW’s focus with the new engine was a linear, yet meatier power delivery. Winding the throttle open for the first time on a wide Spanish highway, the one thing that definitely didn’t pop into my head was, “Damn, wish I had some ShiftCam”. This is a ludicrously fast motorcycle, and the only way you can go faster is by buying a full-fledged sport bike. 180kph is always just a handful of seconds away, and the XR will quite comfortably cross 250kph. Power delivery builds in a completely linearly fashion, and the bike feels particularly rampant between 9,000rpm and 11,000rpm. 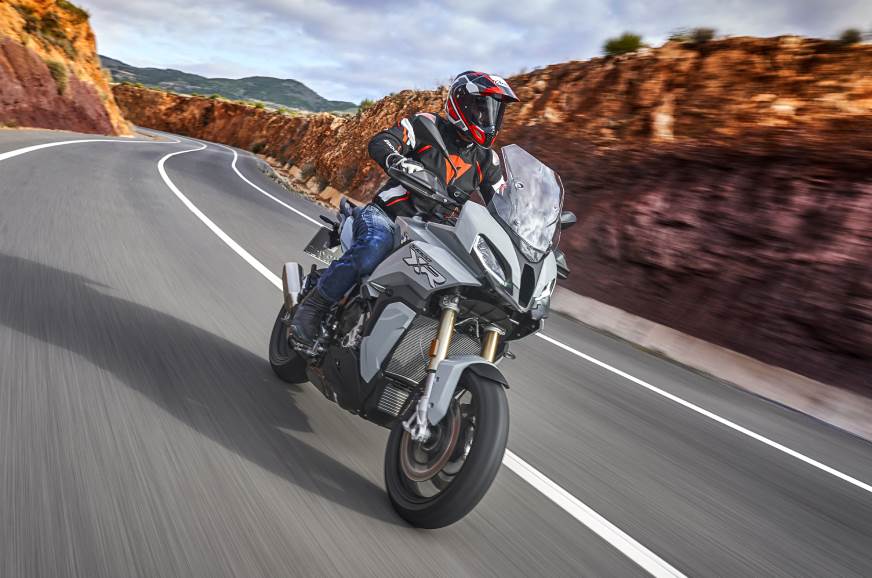 BMW also seems to have sorted out the previous issue of engine vibration manifesting in the handlebar, and the bike felt smooth throughout. The 6-speed gearbox is as precise as you’d expect and the up/down quickshifter that comes with the top-spec model is what we’ve grown to expect from BMW – good enough, but not fantastic. The gear ratios have been lengthened in the fourth, fifth and sixth gears for a long-legged feel out on the highway, and to improve efficiency and meet emissions targets. With a 20-litre fuel tank and a wonderfully comfortable and upright seating position, this bike will cross entire states at speeds that can easily land you in prison, or a hospital bed, if not both.

When you consider that this powertrain is now Euro 5-compliant, the size of the well-designed exhaust, as well as the sweet in-line-four scream it produces at high revs is something worth appreciating. Nevertheless, as mind-bendingly fast the XR is, like most BMWs, it can’t shake that over-engineered sense of perfection. Essentially, this is not the type of bike with heaps of naughty character that make you go giddy in your helmet. 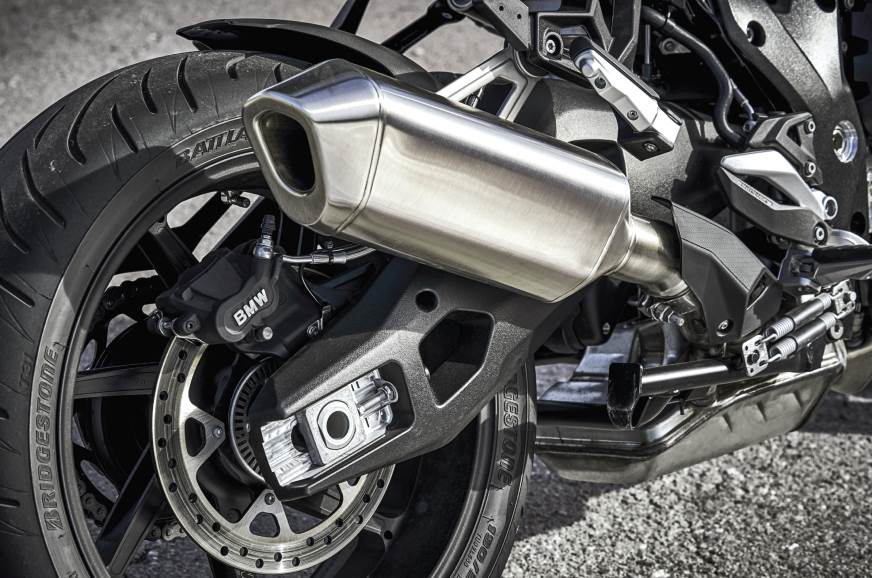 It is incredibly effective though, and not just in a straight line. The XR gets a brand-new frame, once again derived from the S 1000 RR. The engine is more involved as a loadbearing member of the structure; and BMW has managed to save a total of 2.1kg from the frame and swingarm. The wheelbase has been reduced by a fairly substantial 26mm, but the steering rake angle has been increased.

How does this translate on the road? Well, the XR has always been a great handler, and this one is no different. The steering doesn’t feel razorsharp, but the bike leans over without much effort and when you’re in the zone, you can really attack a curvy road. The XR offers just over 50 degrees of lean angle, which is proper sport-bike territory, and with a stickier set of tyres (stock tyres are sport-touring Bridgestone Battlax T31s), you’d be able to embarrass quite a few people at the race track as well. However, it is worth noting that the suspension plays a significant role in how the XR rides.

For 2020, the XR gets electronically controlled suspension damping as standard. BMW tells us that the new ESA (Electronic Suspension Adjustment) has a wider range of adjustability between firm and soft, but there is a small catch. Earlier, when you specced the optional ESA, you’d get both Comfort and Dynamic modes for the suspension. While it is now standard, the ESA on the base model ships with just the Comfort mode, while the top-spec model gives you ‘ESA Pro’ that brings in the sportier Dynamic mode in addition to ‘Comfort’. As press rides generally go, we only got to ride the top- spec model, but I felt that the bike was too soft in ‘Comfort’ – great for sailing down the highway but not so much for the twisty stuff. That considered, the base model might not be as dynamically impressive as the bike it replaces; though we’ll have to ride one to confirm that. 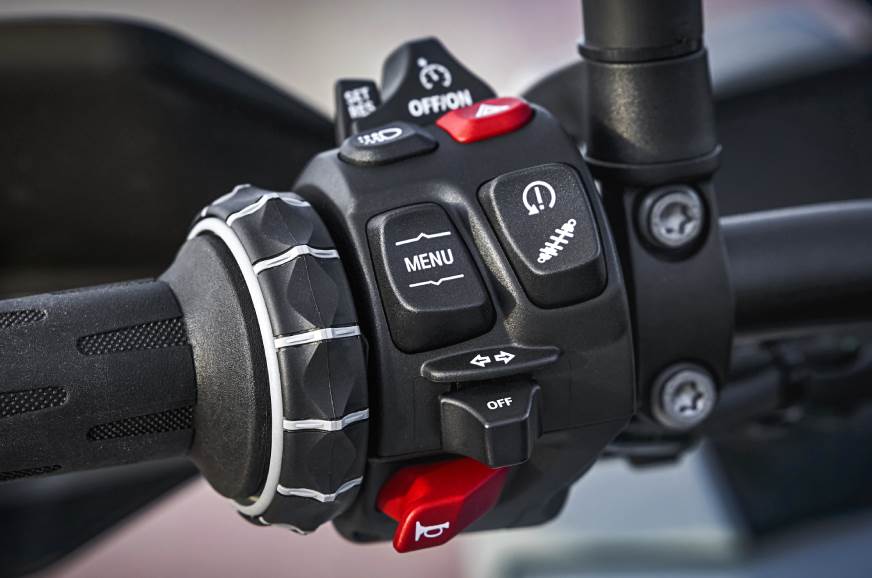 As with most new-age bikes, the XR is dripping with new-age technology and safety assists. What you will interact with most is the new TFT display, another item that is heavily inspired by the S 1000 RR. The sheer depth of menus and adjustability for all the riding modes and electronics is too vast to list here and is something you’ll only fully grasp with time on the bike. BMW even has a new smartphone app that offers the most in-depth post-ride data I have ever seen, down to how much throttle, lean-angle and brakes you have used at any given point in a saved ride. It even tells you when you activated the ABS. Best of all, this app is free to download, unlike some rivals – I’m looking at you KTM!

The XR now comes with four riding modes – Rain, Road, Dynamic and Dynamic Pro. The last mode offers several customisation options and allows the rider to individually set up the traction control, wheelie control, engine response, engine, brake control and Dynamic Suspension mode (if you have the top-spec model). Beyond the more sophisticated suspension, the higher-spec TE model also brings in a bi-directional quickshifter, cornering headlamps, heated grips, cruise control, keyless ignition, hand guards, a luggage rack, a centre stand and more. Of course, all the electronic safety assists gather their information from a 6-axis IMU, so the traction control and ABS both have corner sensitivity.

When can I buy one?

BMW finds that most customers in India go for the higher-spec models, so it’s likely that the S 1000 XR will come in its top trim. Launch is scheduled for mid-2020, but a lot depends on how the COVID-19 catastrophe pans out. We believe pricing won’t change much over the previous model; so you’re looking at something between Rs 20-21 lakh (ex-showroom), which should put it in Ducati Multistrada S territory. Time to start dreaming up a comparison. 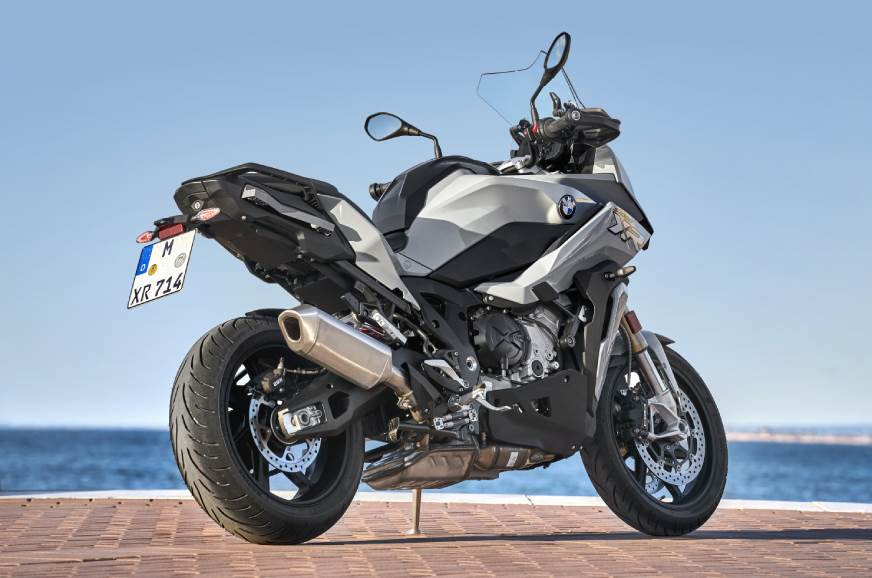