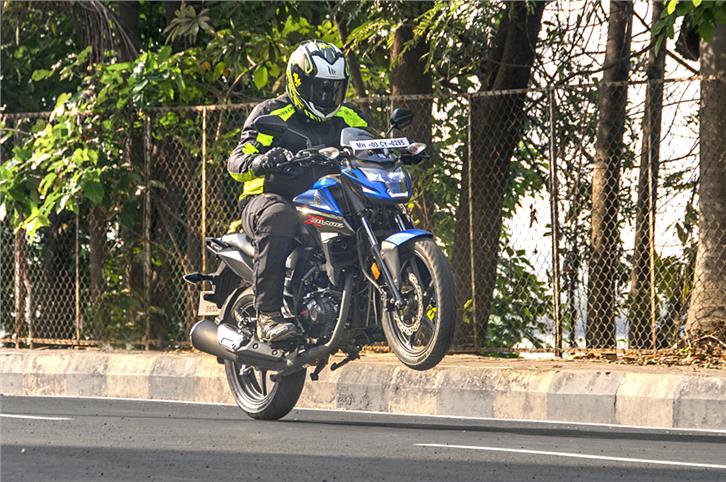 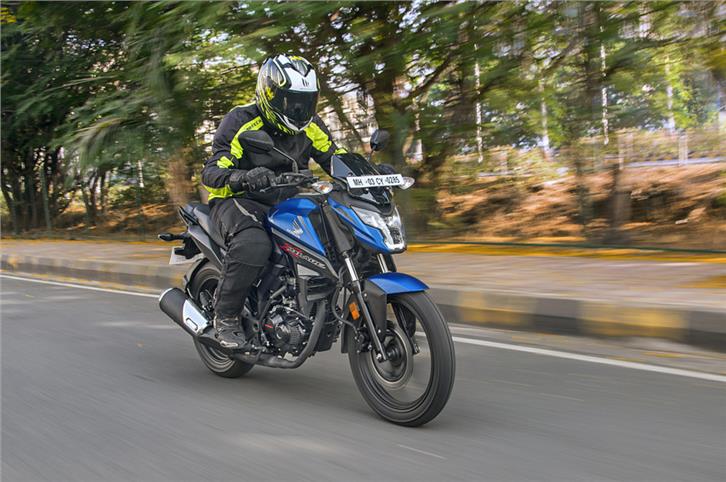 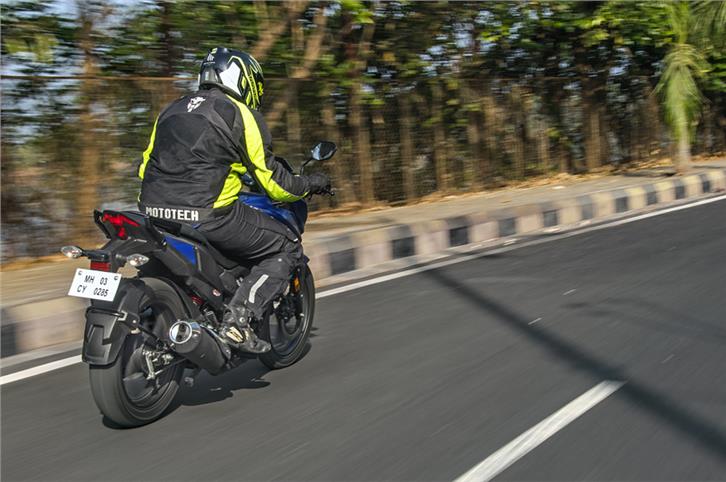 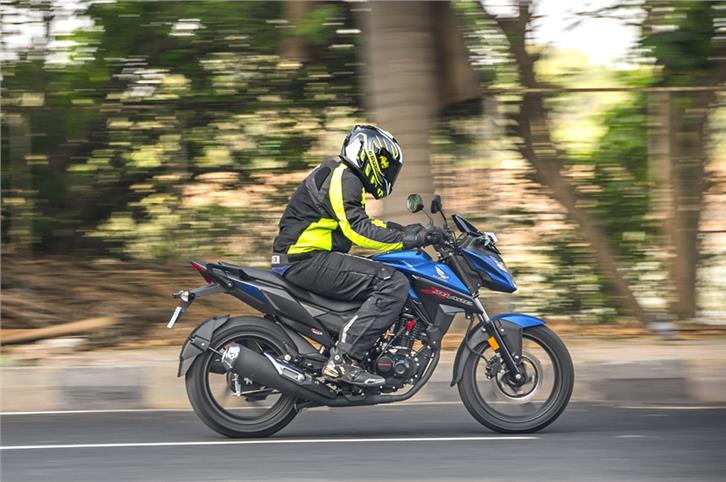 The entry-level performance motorcycle segment is an overcrowded space and, understandably, a confusing one, too. Every manufacturer worth their salt has at least a couple of entries (usually more) in this space, and where there is an opportunity, you can trust Honda to seize it. This time around, it’s the X Blade. Sandwiched between the staid CB Unicorn 160 and the funky CB Hornet 160R, the X Blade appears to be one of the most dramatic looking Indian Hondas ever. Is there more to it than its aggressive appearance, though? Let’s find out.

For the X Blade, Honda has decided to go the whole hog and steer clear of the parts bin. In other words, every single panel on the X Blade is new. Said panels are also styled in great detail – perhaps a bit over-styled; you cannot count the number of surface transitions/layers/textures on all of your fingers. On the whole, though, the X Blade makes a sharp, futuristic impression and appears to be somewhat of a hybrid between ‘naked sports’ and ‘adventure’. The latter cue is visible in the tall-ish windscreen, the high-set turn indicators, the tank pad-esque panels and the chunky, generously designed grab rails.

Swing a leg over it, though, and it feels instantly sporty. The conventional handlebar is a lower, flatter unit than on the Hornet and the pegs are as rear-set as the Hornet, too. The completely new seat is spacious but borders on ‘sporty’ and is firm. ­­­­­

In terms of features, HMSI has kept it really simple (as of now). You can have the X Blade in only one variant that gets a 276mm disc at the front (same unit as the Hornet’s), but it gets neither CBS nor ABS. The fully digital meter is styled differently to the other 160s Honda produces and it features a gear position indicator as well; the Hornet doesn’t, by the way. It also features hazard lights – a good thing if not misused – but doesn’t get an engine-kill switch, which isn't convenient in this day and age. Overall, though, this is a bridge between the CB Unicorn 160 and the Hornet, and is priced accordingly as well; we’ll get to that towards the end of this story.

Out on the streets, the X Blade comes across as fairly entertaining. It idles with a purr but lacks the softness (or numbness, if you please) of the Unicorn 150, which highlights its intentions. Snick it into first and it takes off in an energetic manner, and it certainly has a strong mid-range, which you will enjoy in the city. It’s fast enough in the urban cut and thrust – where it really belongs – and while it doesn’t seem as potent as the Bajaj Pulsar NS160 or the TV Apache RTR 160 4V, it’s decently quick in real-world usage. The motor has a nice tone to it when ridden hard, although you do begin to feel mild vibrations at the handlebar and pegs past 6,000rpm. This isn’t a motorcycle with racetrack aspirations, however, and in an urban context, its performance will leave you satisfied if not exactly thrilled. Nothing to write home about, but nothing to lose sleep over either.

The X Blade is quite agile on its well-endowed feet (or tyres, rather) and it comes across as a stable handling package. It lacks the razor-sharpness of the Apache RTR 160 4V (not that they compete directly, but it’s the best reference point) or the natural, effortless handling of the Suzuki Gixxer, but it’s confident and indulgent in its own right.

Market demands have resulted in a more-than-adequate tyre specification – a 80/100-17 at the front (common to all three 160s) and a 130/70-17 at the rear (the Unicorn 160 gets a 110, Hornet gets a 140) – and these tubeless tyres do a fine job of aligning with your level of riding commitment. The X Blade weighs 140kg, which is 6kg heavier than the non-CBS Unicorn 160 and 2kg more than the non-CBS Hornet. This difference in weight is not exactly noticeable unless you ride all three in quick succession, and it certainly isn’t a hindrance in any way. Having said that, a substantially lighter X Blade would definitely be so much more exciting, and efficient, too!

The riding position, meanwhile, sets the tone for enthusiastic riding although I feel a taller handlebar (even if visually commuter-ish) would add more leverage and suit its urban flickability better.

Speaking of which, I wish HMSI had taken the ‘adventure’ route with the X Blade because it has, both, the visual appeal and the mechanical ability to be a dual-sport motorcycle – a segment Honda hasn’t touched upon in India as yet (save for the fantastic Africa Twin, of course!). The telescopic fork, while a pretty slim unit (33mm is my guess), takes to bumps quite well and the monoshock is pliant, even if set on the stiffer side. Over bad roads, the X Blade isn’t overtly plush but it doesn’t lose composure either. I just found myself having to be a bit careful over bad stretches thanks to the flatter, lower handlebar. The same stretch wasn’t as demanding of my attention on the Hornet, for example.

The brakes, meanwhile, function in a nondescript manner. The bike stops without drama but the front brake lever did come across as a bit wooden and could do with better feel. The 130mm drum at the rear works intuitively, though. HMSI would do well to consider CBS for it, at least from a value perspective.

Yes, if the CB Unicorn 160 is too boring for you and if the Hornet is financially out of reach. Okay, it’s not as simple as that. The X Blade, despite being cheaper than the Hornet, is better in some aspects and definitely looks sharper and younger, overall. It also offers an LED headlight (robo-face may sound unimaginative but looks striking in the flesh), like the updated Hornet does, and only misses out on CBS/ABS and 0.9hp (which you don’t exactly miss). That’s not a monumental disparity, to be honest, and it definitely makes a strong case for the X Blade.

Finally, the prices. The X Blade is priced at Rs 78,500 – higher than the top variant of the CB Unicorn 160 (CBS, front disc: Rs 76,116 ) and lower than the base Hornet 160R (front disc: Rs 84,675) (all prices, ex-showroom, Delhi). Tightly wedged between two formidable siblings as it is, the X Blade is a stylish motorcycle with a lot of merits, even if none of them are ground-breaking in any way. A gap well identified, then? Sure, but let’s hope Honda tries to go off the beaten path and introduces something thought-provoking next!