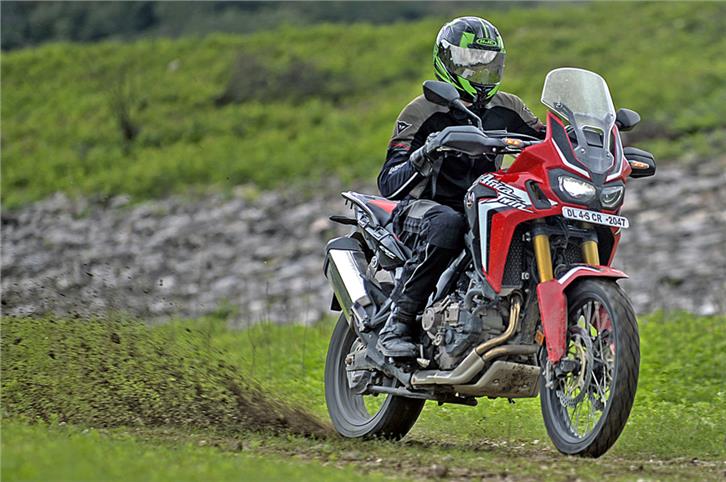 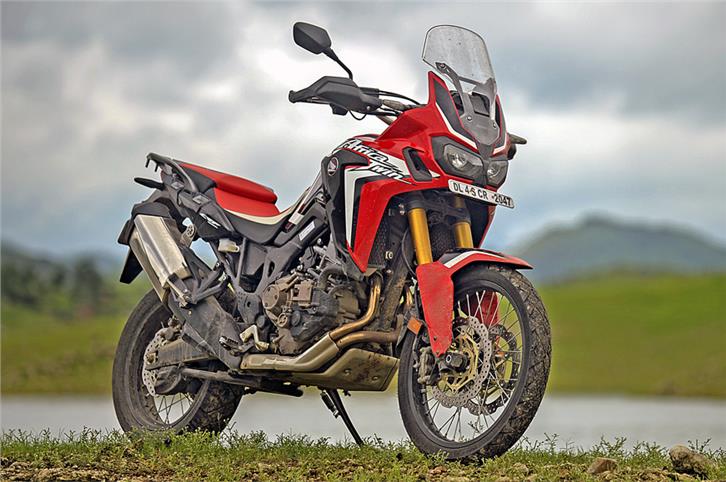 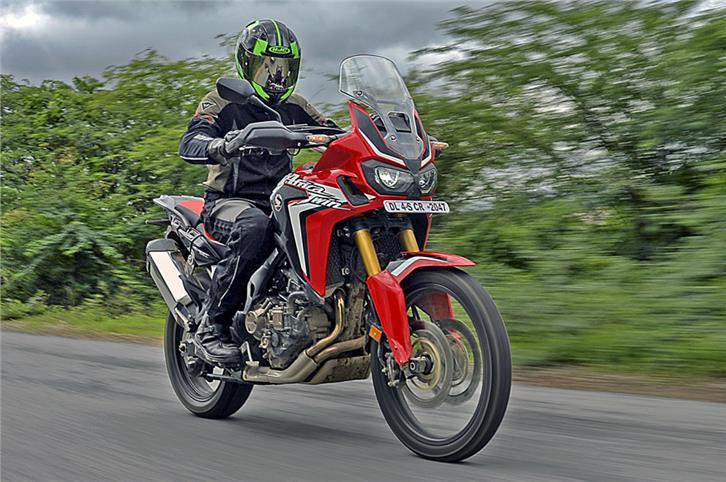 The Honda Africa Twin DCT is finally here in India and we take this new adventure tourer for a spin to see if it lives up to its off-roading legacy.

What is it?
The Africa Twin nameplate is among the most evocative in the world of off-road motorcycling. Dating back to the late 1980s, the original Africa Twin was called the XRV650, a road-legal dual-sport inspired by Honda’s purpose-built rally racer, the NXR750, which dominated the Paris-Dakar rally from 1986-89. This was in the days when the rally used to actually run in Africa, before the growing threat of terrorism forced organisers to move the event to South America in 2009. It has run there since, now known simply as the Dakar rally. The XRV650 debuted in 1988 and was replaced by the XRV750 in 1990, which went on to become a legend over its 13-year production run. Thirteen further Africa ‘Twinless’ years later, Honda released a brand new Africa Twin to the world, the CRF1000L. That bike is now finally available in India and we’ve just had a go at it.

What does it look like?
The Africa Twin takes proud design cues from Honda’s current Dakar competition bike, the CRF 450 Rally. The result is a minimal, yet beautiful machine where design form comes through the functional shape. It's the most proportionate, purposeful-looking ADV bike out there, with a tall front fairing that encompasses radiator shrouds which drop down to the sides. The sleek, twin-LED headlamps pay tribute to the original XR750’s round units and lend the face a striking look. Relatively small for an ADV bike, the 18.8-litre tank further contributes to the Africa Twin’s sleek form. The side and rear profile see simple, functional designs, with a long, bright-red two-piece seat unit that complements the Dakar-inspired paintwork. The rear passenger gets a large, flat perch and a chunky grab rail which can also support an accessory top-box. The rider seat uses a clever height adjustment feature that allows the rider to easily switch between a 820mm and a 840mm seat height configuration. These numbers easily allow the average 5’7” tall rider to get their feet down. For reference, KTM quotes an 830mm seat height for the 2017 390 Duke.

Unlike some big ADVs, the Africa Twin isn’t terribly intimidating the moment you swing a leg over. The sleek look manifests itself in a slimmer feel and the wide bars provide great leverage while also offering the tightest turning radius in class. Combine that with the friendly seat height and you have a very approachable machine for a bike in this category. Behind the non-adjustable windscreen (a taller one is part of the accessory list) lies a tall, vertically stacked instrument inspired by the Dakar bikes. Information is very easy to read with speed and rpm information displayed at the top while riding mode, trip and other information displayed along the lower screens. Tell-tale lights decorate the sides of the console. Switchgear on the left side allows control of the various modes in the screen as well as the three-stage traction control. There’s also a couple of unusual paddle shifters on the left and a rocker switch on the right side marked ‘N, D and S’. And therein lays the uniqueness of this motorcycle.

What powers it?
When Honda originally announced the Africa Twin for India at the 2016 Auto Expo, two points stood out. One, the bike would be locally assembled and, two, it would only ship with Honda’s dual-clutch automatic transmission or DCT. Available internationally with a conventional six-speed manual or the six-speed DCT, we, in India, get to choose only the automatic. This is a revised version of the DCT transmission that was originally offered with the VFR1200 in India few years back. The gearbox can change gears automatically in D mode or the rider can manually shift by using paddles on the left side. A three-stage Sport mode offers varying levels of gear shift patterns and an additional G mode alters the clutch action to provide additional traction in gravelly surfaces.

The engine is a completely new 999.11cc parallel-twin developed for this bike. Honda moved away from the old V-twin layout for packaging benefits and this engine sees details that benefit an ADV bike. The engine uses a 270-degree crank that produces a deep growl and helps generate a better feel for traction at the rear. The compact crankcase houses the oil pump while the water pump is housed within the clutch casing, with both pumps driven by a shared balancer shaft. Clever engineering like this has helped reduce the engine’s height, which simultaneously allows the low seat height as well as an impressive ground clearance of 250mm.

Its 87hp of peak power arrives at 7,500rpm, while a maximum of 91.9Nm of torque is available at a low 6,000rpm. The engine is enjoyably smooth but a characteristic beat differentiates it from the turbine-like inline-three and -four-cylinder engines. Power delivery is thoroughly linear and performance is strong, but not quite breathtaking, thanks to the relatively humble number and hefty weight.

What’s the automatic like?
Surprisingly friendly. It takes a while to get used to the absence of a clutch or gear shifter, but the DCT is a delightfully smooth operator. To set off, all you have to do is select D mode and gently open the throttle. Throttle action is honey-smooth at the opening, with no jerks or inconsistency. Shifts arrive smoothly with a refined click rather than a heavy clunk. Coming to a standstill at traffic lights, the bike can be kept in D mode, but you need to remember not to blip the throttle! Alternatively, you can shift into neutral and use the parking brake that resides where the clutch lever normally would. D mode soon feels a bit pedestrian and you’ll soon find yourself spending more time in the Sport modes. The gearbox shifts later in these modes and but remains intuitive. Inclines and slopes are well accounted for and downshifts arrive along with braking to ensure you’re in the right gear for corner exits. Manual mode is also available but it’s far easier to use the paddles only when you need a shift.

Shift speed is quick enough, but not blazing fast like in the best dual-clutch boxes from Porsche and Audi. Ultimately, the gearbox never put a foot wrong over four hours of city riding, highway cruising, attacking some fast curves and even a spot of mild off-roading. Most importantly, the Africa Twin doesn’t feel like an emasculated machine. It’s still retains the big motorcycle feel, but only leaves one less job for the rider. The missing rider connection is offset by the DCT’s city riding ease and higher confidence it provides off-road noobs like yours truly. Colour me impressed.

And the riding dynamics?
The Africa Twin uses a steel semi-double cradle, inspired by the CRF 450 Rally. Wheel size also follows the rally bike with a large 21-inch front wheel and an 18-inch rear. Tyres are by Dunlop, a thin 90/90 section up front and a 150/70 section at the rear. The tyre size is telling of this motorcycle’s off-road intent, but we wish Honda offered tubeless tyre-compatible rims, at least as an option. The majority of customers, at least in our market, probably aren’t hardcore off-road junkies and tubeless tyres are far easier to fix when the inevitable puncture arrives.

Nevertheless, the Africa Twin is easily one of the most capable off-road machines on sale in India. The softly sprung Showa suspension is fully adjustable and has plenty of travel – 230mm in front and 220mm at the rear. The automatic gearbox allows you to focus on controlling the bike while the traction control and rear ABS can be deactivated for better control. A high-mounted airbox and intake means the Africa Twin can get through some fairly deep water crossings as well. Ultimately though, despite the low-centred mass, this 242kg bike is still a hefty beast and demands an experienced hand to extract its full potential.

On the road, the bike impresses with an impervious feel. Potholes, even crater sized ones, are simply swallowed up and the bike conveys an enjoyable feeling of indestructibility. When the pace goes up, though, you’ll find that it’s reasonably capable, but there are better, fast road-biased ADV bikes. The skinny front wheel doesn’t provide much feedback at speed and the Dunlop Trailmax tyres aren’t the best we’ve experienced in the segment. The traction control system also feels a little basic, even in its least intrusive of the three settings. Once initiated, it continues to intervene for a while, even after the rear wheel has gained grip.

Initial brake-bite is soft from the 310mm dual-disc set-up, but performance is progressive and strong enough. The suspension also feels a bit too squishy for spirited riding through the hills. Fettling with the suspension settings should improve this, but the fact remains that the Africa Twin gets happier as the roads worsen.

Is it worth the money?
Absolutely. Localised assembly has helped Honda price the Africa Twin at Rs 13.06 lakh (ex-showroom, Delhi) which puts it in the same ballpark as the Ducati Multistrada 950 and Triumph’s many iterations of the Tiger 800. The DCT transmission is pleasant to use and quite easy to acclimatise to as well. The initial lot of 50 motorcycles is already accounted for and deliveries have now begun. Further bikes are expected to come in over the next few months with HMSI ordering the CKD kits as the demand arises. Until Honda decides to offer the conventional gearbox, the Africa Twin could remain a niche player in its segment. But for those with an open mind, this is a really likeable motorcycle.