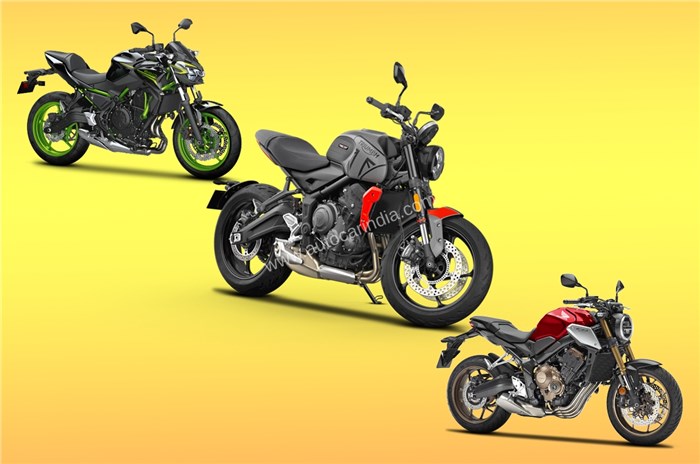 We take a look at how the new Triumph Trident 660 compares against similar bikes, as well as other bikes that are similarly priced.

Triumph’s eagerly awaited Triumph Trident 660 has just been launched in India at Rs 6.95 lakh, marking it Triumph’s most affordable-naked motorcycle on sale in India. The Trident’s natural rivals include the likes of the recently launched Honda CB650R and the Kawasaki Z650. Here’s how the three bikes compare on paper.

The new Trident 660 uses a 660cc, inline-triple that makes 81hp and 64Nm of torque. The bike comes with a 6-speed gearbox and a bi-directional quickshifter can be added on as an accessory. In comparison, the Honda makes a little more power, but less torque.

The CB650R uses the exact same engine as the 2021 CBR650R, which was also recently launched at Rs 8.88 lakh. This 648.7cc inline four-cylinder engine has been detuned for India and makes 84hp and 57.5Nm - down from the 94hp and 64Nm of torque that it makes on the international-spec bike. That's also 4hp and 2.5Nm less than the India-spec 2019 CBR650R. The Triumph’s power and torque both peak at a lower rpm than the Honda, so it should offer better tractability, but this will depend on how both bikes are geared.

The Z650 uses a 649cc parallel-twin engine, and in the transition to BS6, the bike received a revised exhaust and airbox. Peak power, at 68hp, is notably lower than that of its rivals, but a peak torque figure of 64Nm is on par with that of the Trident. On the flipside, the Z650 makes its peak power figures at much lower in the rev band, than the other two motorcycles.

The Triumph Trident uses a steel frame and a steel swingarm. Despite this, the Trident weighs a full 17 kilos less than the Honda and at 189kg, is also 2kg lighter than the Z650. The suspension set-up includes a non-adjustable, 41mm Showa SFF upside-down fork and a pre-load adjustable rear shock. Where the Triumph falls back on the Honda is in the braking department where it gets dual-piston axially-mounted calipers that clamp onto two 310mm discs. The Triumph’s 805mm seat height is a little lower than the Honda’s 810mm unit.

Like its faired sibling the CBR650R, the CB650R uses a steel chassis with an aluminium swingarm. Suspension is handled by a non-adjustable, 41mm USD Showa Separate Function Big Piston Fork and a pre-load adjustable monoshock. Braking is taken care of by radially-mounted Nissin calipers biting down on twin 310mm discs. At 206kg, CB650R is on the heavy side, and is the heaviest motorcycle here.

The Z650 keeps things simple with a steel frame and swingarm. However, it’s the only motorcycle here to feature a conventional telescopic fork, instead of a USD unit. At the rear, suspension is handled by a pre-load adjustable monoshock. The Z650 uses 300mm twin-discs at the front and a 220mm single-disc at the rear. The seat height of 790mm is the lowest here.

The new Trident features ride-by-wire tech that enables two riding modes (Road and Rain) and adjustable traction control. Traction control can also be turned off in both riding modes. Also on offer is a fully-digital instrument cluster that can be equipped with a Bluetooth module. Equipping this system allows for turn-by-turn navigation, GoPro control and phone and music control. It also gets full-LED lighting and self-cancelling indicators.

The handsome CB650R comes with full-LED lighting, dual channel ABS, a slip/assist clutch and traction control, or as Honda calls it, Honda Selectable Torque Control (HSTC). Beyond that, things are quite simple and the bike doesn’t offer a TFT display, but instead has an LCD display, similar to the one on the Honda CB500X we recently reviewed.

The Z650 also gets a 5-inch TFT display that includes smartphone connectivity. The unit can also be connected to your phone via the Rideology app, but with the Z650, it misses out on navigation or basic phone notifications and only displays ride statistics.

At Rs 6.95 lakh (ex-showroom, India), the Trident 660 is rather competitively priced. It’s slightly more expensive than the Kawasaki Z650, and a fair bit more affordable than the Honda CB650R. In international markets like the UK, the Trident is a direct rival to the Honda CB650R, with just about GBP 100 (around Rs 10,000) separating the two. However, Honda India appears to be taking a more premium pricing strategy with its large capacity products.

How the Triumph fares against these machines in the real-world is something that can only be answered after we ride it.